Tender Slow Cooker Cuban Mojo Pork is full of garlic and citrus flavors. It's a simple dump-and-go recipe that marinates in a Cuban mojo sauce in the crock pot. And the leftovers make the best Cuban sandwiches ever!

Pulled pork is such an amazing dish and can be made in so many ways. Some of our other favorites are Sweet & Spicy Slow Cooker Pulled Pork, Slow Cooker Asian Pulled Pork Sliders, and Crispy Mexican Slow Cooker Pork Carnitas!

I'm kind of obsessed with slow cooked pulled pork. It's the juiciest, easiest way to prepare pork shoulder or pork butt, I think, and it's so versatile in how to use the meat. You can obviously eat it piled on a plate with white rice, black beans, and fried ripe plantains (maduros) on the side, which is what you might find in Florida or Cuba.

But it's also amazing piled on soft rolls, wrapped into tortillas for burritos, added to soups and salads, or used to top cheese-covered tortilla chips for some of the best nachos of your life.

Slow cooker cuban mojo pork is one of the recipes I'm sharing to represent Florida in my American Eats series, where I'm exploring the flavors of each state in the good old U.S.A., one state at a time. And you're going to need it for the cuban sandwiches (cubanos) that I will be sharing next!

What is Cuban Mojo Sauce?

So, if you are wondering about this funny name and why this is called "mojo" pork, it's all because of the sauce that the pork marinates in while cooking in the slow cooker. Cuban mojo sauce (pronounced MOH-hoh, not MOH-joe) comes from Cuba but is also used in Spanish and Portuguese cuisines, with some small variations.

It's typically made with sour oranges, which grow wild in parts of Florida and the Bahamas. Fortunately, it's easy to mimic the flavor of sour or bitter oranges using fresh squeezed orange and lime juices, since most of us don't have access to actual sour oranges.

The other main ingredients in cuban mojo sauce are lots of garlic, cumin, oregano, cilantro, mint, and olive oil. There is not a lot of mint and it isn't in all mojo sauce recipes, but I love it and think it adds a wonderful, subtle flavor quality with everything else.

Not only does this Cuban mojo sauce act as a fantastic marinade, but it can also be used as a dip or sauce. I like to reserve a little of the mojo sauce to drizzle over the finished pork along with some of the pork juices that cook off, just to boost the flavor of the finished meat.

This really is such an easy recipe to make in the morning and have dinner pretty much ready when you want it in the evening. Just pulse all the mojo sauce ingredients together in a blender or food processor (affiliate link) and pour it over the pork shoulder in the slow cooker, cover it, and walk away. Pork butt works just as well.

You can brown the pork shoulder first on all sides if you want to, but it's not necessary. Although like with my Mexican pork carnitas, I like to finish this slow cooker Cuban mojo pork in the oven just to get a little bit of crust on the top, which is pretty much impossible to do in the slow cooker.

Just carefully transfer the finished pork roast to a baking sheet and pop it in a 400 degree F oven for 15-20 minutes at the end of cooking in order to crisp up the top a bit. Afterwards, use two forks to pull the roast apart into chunks for Cuban pulled pork. 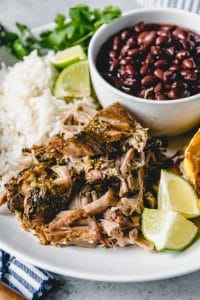 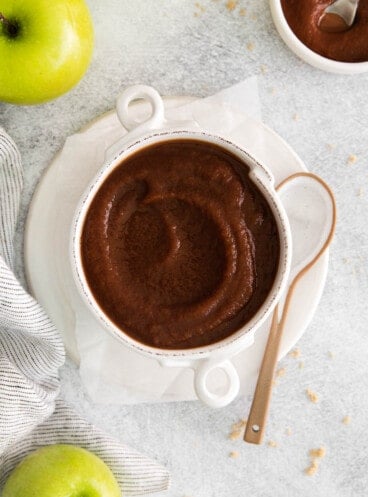 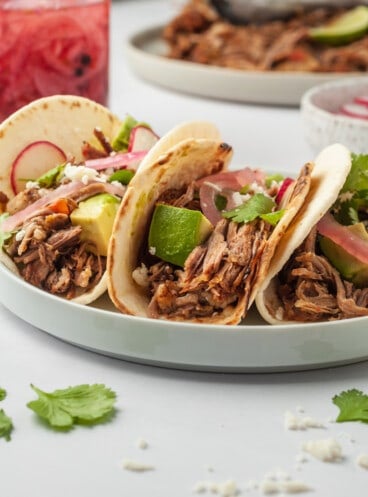