Forget tacos and celebrate Cinco de Mayo with some Charro Beans (Frijoles Charros) cooked in the Instant Pot and served alongside some carne asada, grilled Mexican street corn, fresh tortillas, and horchata for a delicious and culturally authentic Mexican food experience at home!

I promise to get to the recipe but the nerd in me has questions that needed answering first! Like why do we celebrate Cinco de Mayo in the United States? Most Americans think Cinco de Mayo is celebrating Mexican Independence Day, but that is actually the 16th of September, not May 5th.

On May 5, 1862, outnumbered Mexican forces in Puebla, Mexico defeated reputedly superior French forces in a battle that ended up being a turning point in an ongoing Mexican-French conflict. If France had won instead, it would have given them a chance to help the Confederacy in the American Civil War, which could have hugely impacted the future of the United States of America.

Cinco de Mayo was first celebrated in California in 1863, the year following the battle. There were parades, people dressed in Civil War uniforms, and speeches were made about how the Battle of Puebla fit in with the larger narrative of the abolition of slavery. It eventually became more of a celebration of Mexican identity and we continue to celebrate it today with an emphasis on food, culture, and traditions of Mexico but with little historical knowledge of the date's significance.

What are Charro Beans?

Charro beans, also known as frijoles charros or "cowboy beans", got their name from the Mexican cowboys who ate them.

They are a traditional Mexican side dish that seem to have originated in Northern Mexico and are made by cooking dried pinto beans long and slow until soft, but not mushy, with ingredients like onion, garlic, peppers, tomatoes, and meat (usually bacon, but occasionally ham, sausage, and chorizo).

There is a variation on charro beans known as borrachos beans, which is essentially the same recipe, just with Mexican beer added to the charro beans (borracho means "drunk" in Spanish).

What are Charro Beans made of?

How to make Charro Beans in a pressure cooker

While you could absolutely make this easy charro beans recipe in a slow cooker or on the stovetop by adding a little extra water and soaking the beans overnight beforehand, I really wanted to use my Instant Pot for them so I didn't have to plan ahead.

I got my Instant Pot a couple of months ago and have been experimenting with it here and there, with varying degrees of success.

But this is the first pressure cooker recipe that I feel ready to share here on the blog since cooking pinto beans in the pressure cooker is so much faster than on the stovetop or slow cooker and they turned out amazing!

It's hugely rewarding to take a recipe that would normally take at least 8-10 hours and have them ready from start to finish in about 1 hour 15 minutes of total cooking time.

How to store Charros Beans

Store any leftover charro beans in the fridge for up to 4 days in an airtight container for maximum freshness.

You can also freeze charro beans by letting them cool completely, then transferring them to a freezer-safe airtight container or bag and freezing for up to 2 months. Thaw on the counter or in the fridge, then reheat on the stovetop or in the microwave before serving.

How to serve this Charro Bean Recipe

What is the difference between charro beans and refried beans?

What does charro beans mean in Spanish?

Charro means "horseman" or "cowboy" in Spanish so these charro beans or frijoles charros can also be known as cowboy beans. 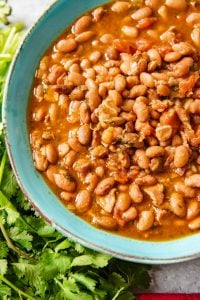