Make this easy Asian Slaw with Ginger Peanut Dressing for a delicious side or to pile on top of pulled pork sandwiches! This is a fresh and vibrant coleslaw without mayo and is sure to be a hit with your family! 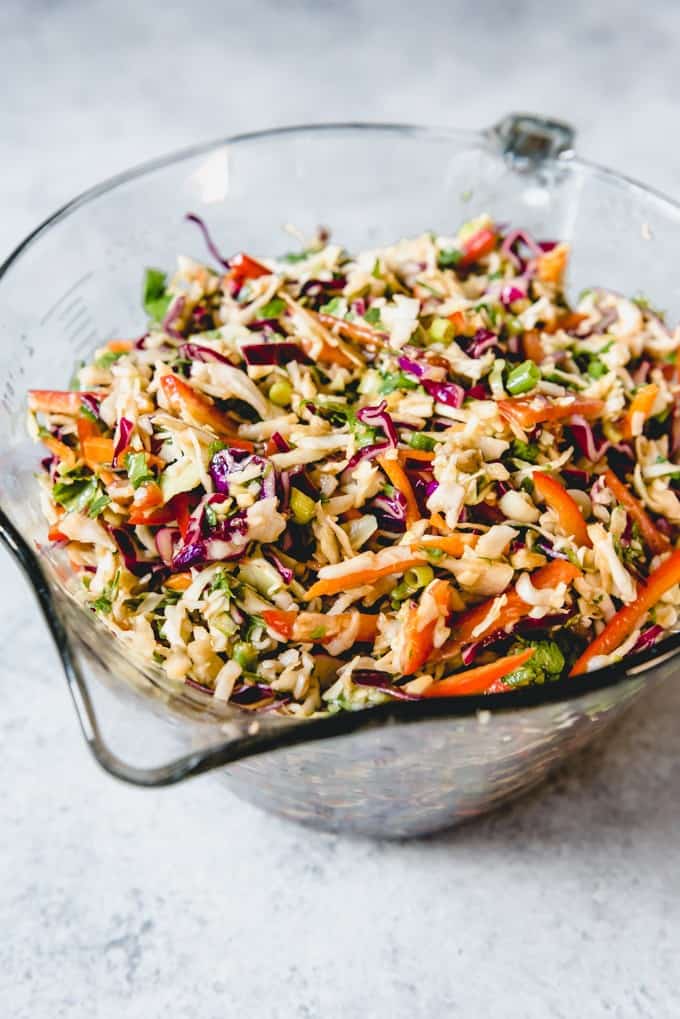 I’m obsessed with this crunchy Asian slaw with lots of bright colors and big, fantastic flavors of sesame oil, ginger, garlic, and peanut butter. Seriously, I think I’ve made a batch a week for the past month, it’s that good.

Which is saying something since I’m typically ambivalent, at best, towards coleslaw, which I usually find too sweet or too weighed-down from mayo. But this Asian slaw is a whole other story.

And I just bypassed the mayo altogether in favor of a homemade ginger peanut dressing that packs a major flavor wallop so wonderful that I just. can’t. get. enough. 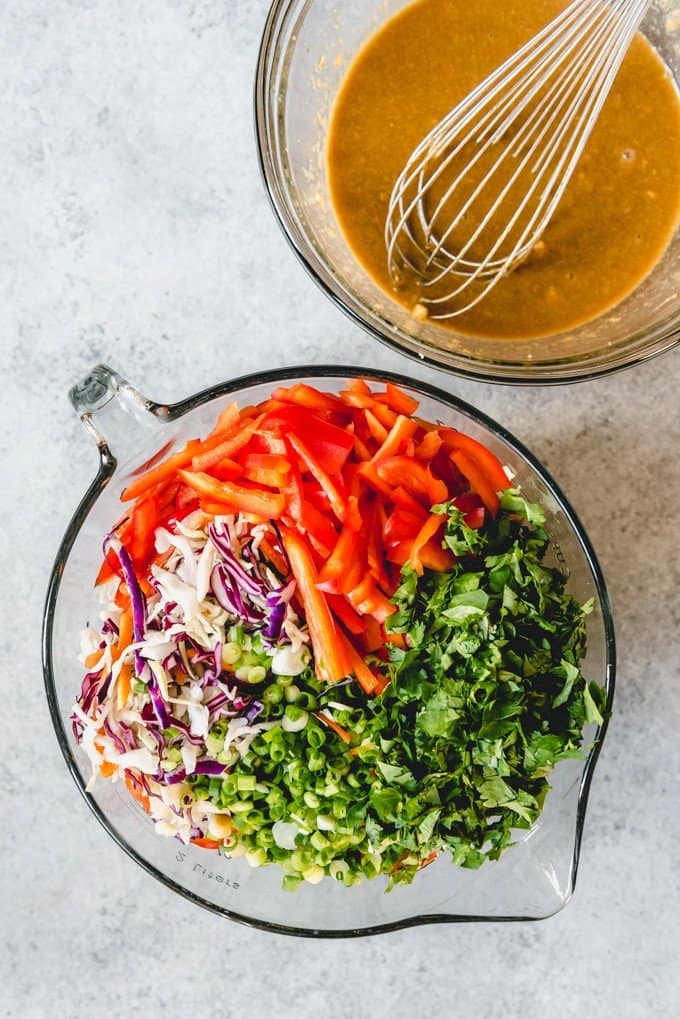 Asian slaw makes a wonderful side all on it’s own – I could easily eat bowlfuls of this stuff – but it’s perfect for topping these Slow Cooker Asian Pulled Pork Sliders I shared the other day.

I can see these being enjoyed all season long for easy entertaining or game day food. You could make this into a full-on dinner salad by adding crunchy Ramen noodles and some cooked chicken or salmon. 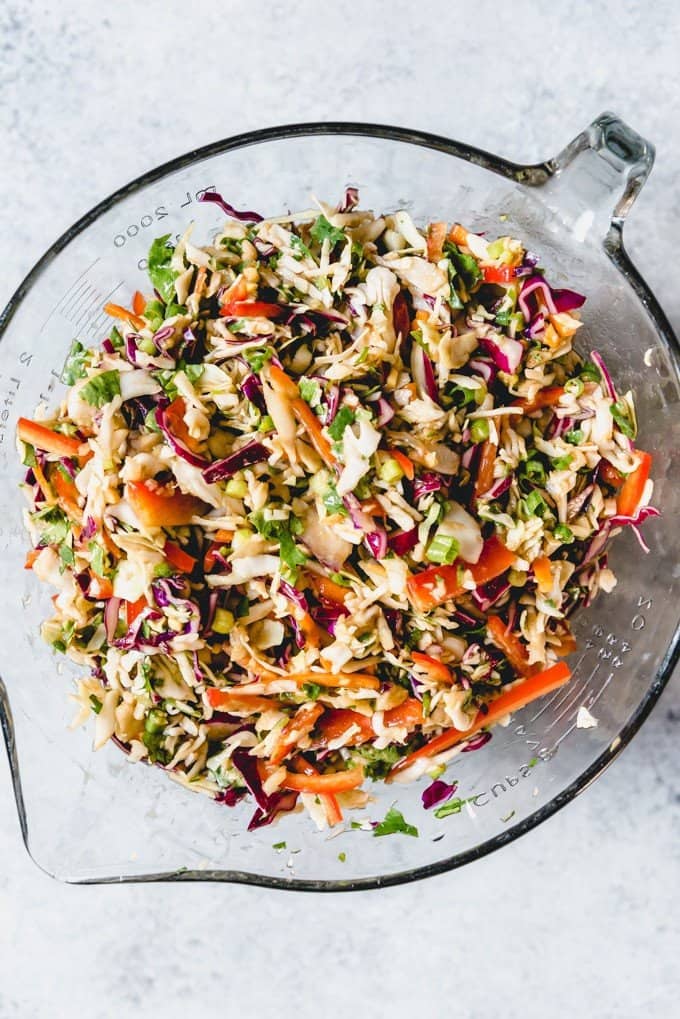 How to Make Asian Slaw

This easy Asian cabbage slaw starts with a bag of coleslaw mix from the grocery store to save some of the extra chopping of cabbage.

But since those mixes are typically pretty boring, with mostly just regular green cabbage and just a few sad pops of purple and orange from a handful of grated carrots and red cabbage, I decided to throw in some more color and flavor. 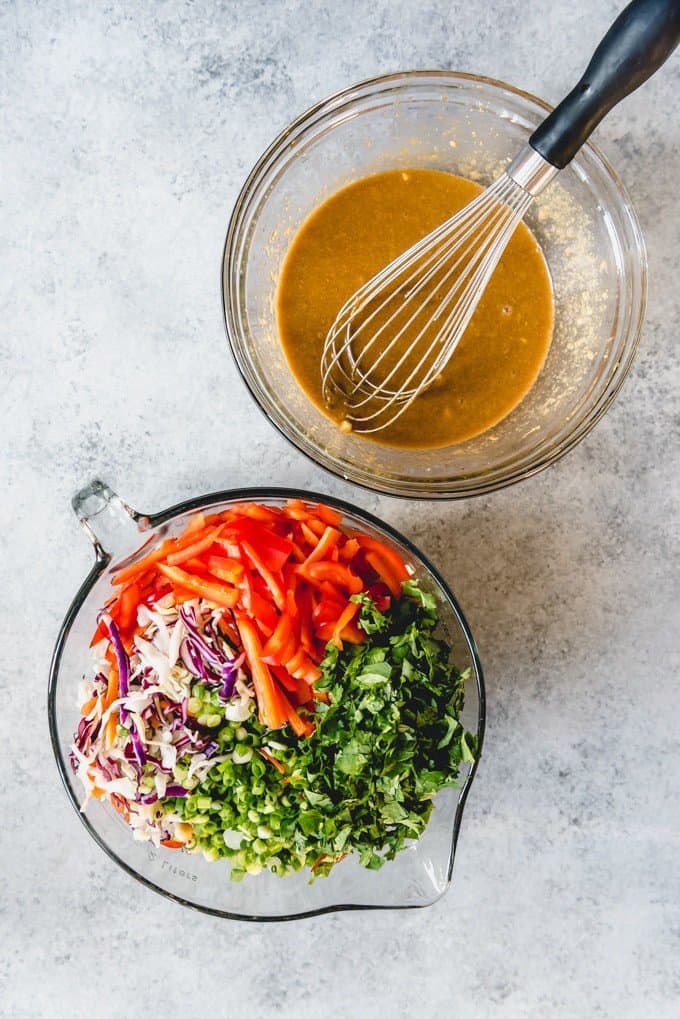 The red cabbage and shredded carrots were a no brainer since they are typically included in those bagged coleslaw mixes.

But I also had a bag of 6 red bell peppers from Costco (gets me every time) that needed to be used up so I grabbed one of those and started to julienne the red pepper (which is just a fancy way of saying I sliced it into really thin, short strips).

The key is to make sure that the pepper is sliced thin enough that you aren’t getting chunks that are noticeably a lot bigger than the rest of the slaw ingredients.

I also chopped up some green onion and fresh cilantro to go in there too, which gave even more color and flavor.

After that, it’s just a matter of whisking together the dressing ingredients in a bowl and pouring it over the slaw ingredients, tossing to coat.

The dressing for this Asian slaw calls for sesame oil, which is something I often use when cooking Asian-style foods. It has a deep nutty, toasted flavor that I love, and I really recommend buying some if you don’t already have it in your pantry. It’s not a big amount, but it definitely makes a difference. 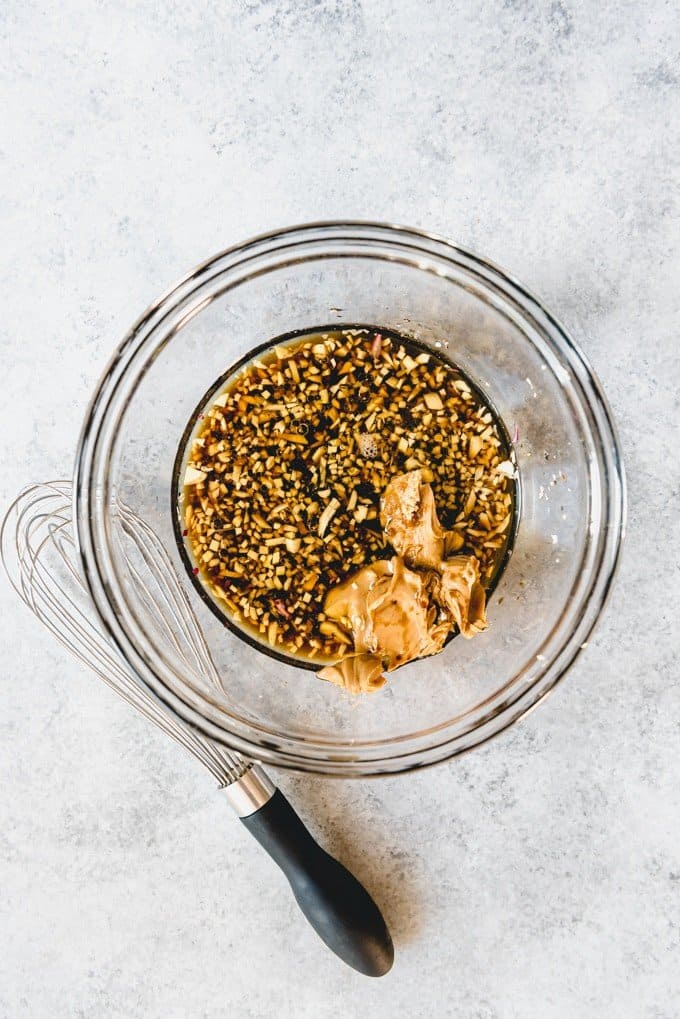 This cabbage and carrots will soften a bit after at least 30 minutes of chilling in the fridge after mixing with the dressing.  I think this Asian slaw is best when served the day it is made.

If you try this recipe, please rate it and leave a comment on this post. Getting feedback from you helps me and other readers too! And if you’re on Pinterest, feel free to leave a comment and photo there if you have one!

Also, if you share on INSTAGRAM, use the hashtag #houseofnasheats and tag me (@houseofnasheats) so I can stop by and give your post some love. Thank you!!! 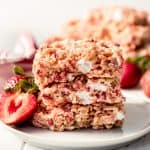