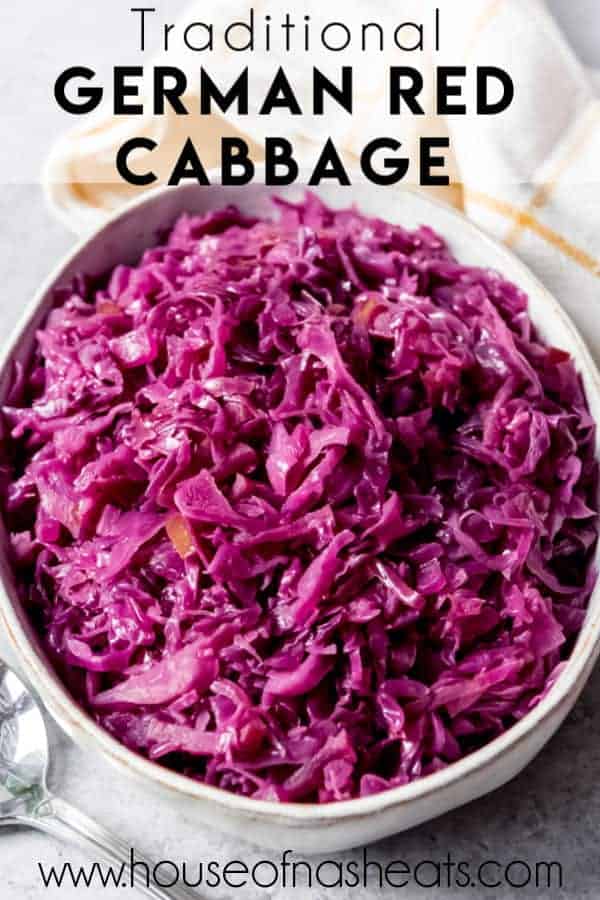 This delicious German Red Cabbage (also known as Rotkohl or Blaukraut depending on which part of Germany you are in) is a fantastic sweet and sour recipe that is served with many traditional German dishes.

We love German food and eating out at German restaurants. It reminds us of the time we lived in Germany doing summer-long internships during school! German Plum Cake and German Apple Cake with Streusel Topping [Apfelkuchen mit Streusel] are two of our other favorites if you are looking for a dessert to go with your meal!

Everybody knows that Germany is famous for sauerkraut, but not as many seem to have heard about rotkohl (pronounced rote-coal). I like eating vegetables, but I LOVE eating rotkohl. It's seriously so, so good that I always want second helpings.

If you have ever been to Germany or eaten at a German restaurant, chances are you have seen this favorite traditional dish.

Rotkohl is a cooked German red cabbage recipe that is easy to make, although it does take a little time for the cabbage to braise slowly on the stovetop. It’s a very popular German side dish that varies somewhat by region, but frequently combines thinly shredded red cabbage, tart green apples, and vinegar, with a little sugar or apple cider to balance things out.

I find that compared to sauerkraut, rotkohl it is not as intensely mouth puckering and has a milder, subtly sweet taste thanks to the addition of apples, cider, and a little bit of sugar.

I don't know if it is the vibrant purple hue or the sweet, the sweet and sour flavor, or the texture which is tender but not mushy that really speaks to me. Regardless, this simple red cabbage dish is easily one of my favorite German recipes and I really hope you love it as much as I do.

What to serve with German red cabbage

The tangy flavor of German red cabbage goes well with many dishes, but especially hearty and meaty ones. Although it's just as good with simple pasta, in my opinion. Any of these German recipes would be excellent with rotkohl.

But it's also fantastic with grilled pork chops, roasted chicken, and other non-German main dishes as well. It's a pretty versatile side!

Do you serve rotkohl hot or cold?

While I personally prefer to eat this dish warm, you can serve it hot or cold. It’s totally up to your preferences!

Consider eating it hot when fresh and enjoying the leftovers cold, since one batch makes quite a lot of rotkohl. But the leftovers heat up really well too, and I actually think the flavor is even better the next day!

Can you freeze rotkohl?

Yes, German red cabbage freezes well. For best results, freeze the rotkohl in an airtight container for up to one month. Thaw in the fridge overnight and serve either warm or cold. 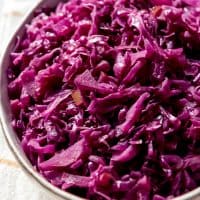 Many traditional recipes also called for 2 tablespoons of cherry preserves or red currant jam, but that's not as easy to find and I never have it on hand, so I leave it out and don't really notice a difference. A mandoline makes slicing an entire head of cabbage quick and easy. Just be careful of your fingers!