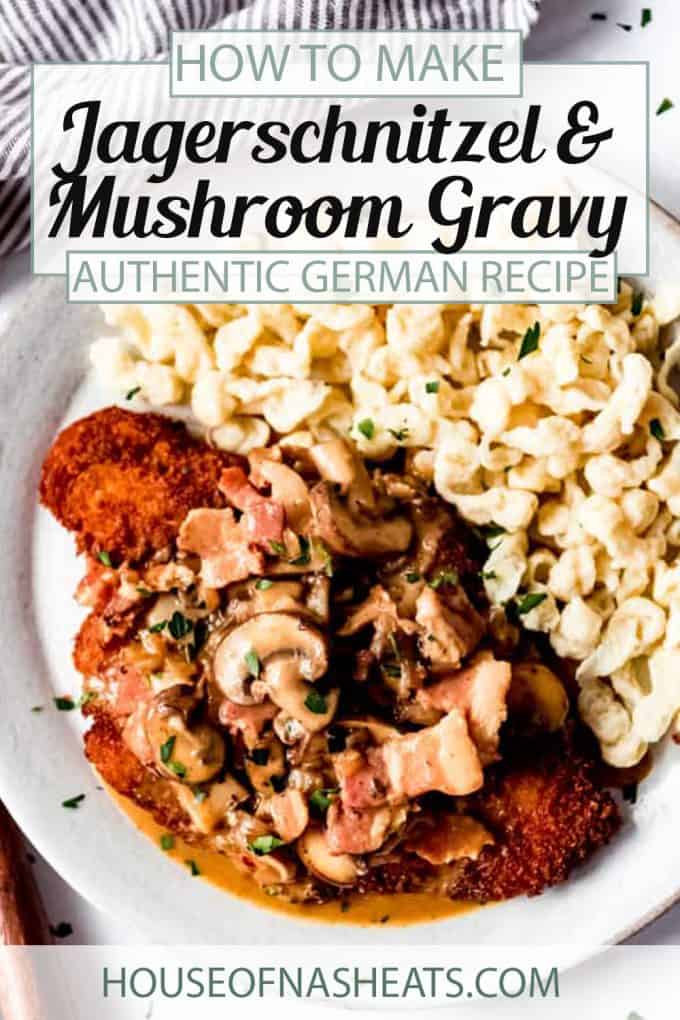 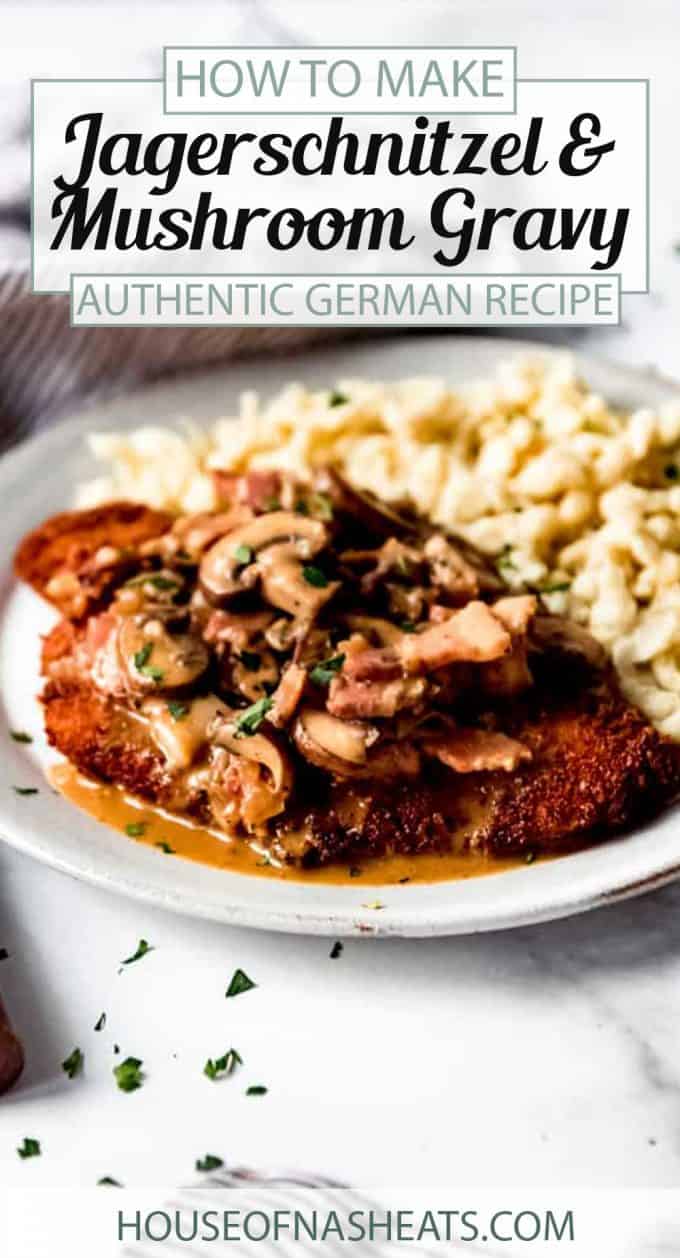 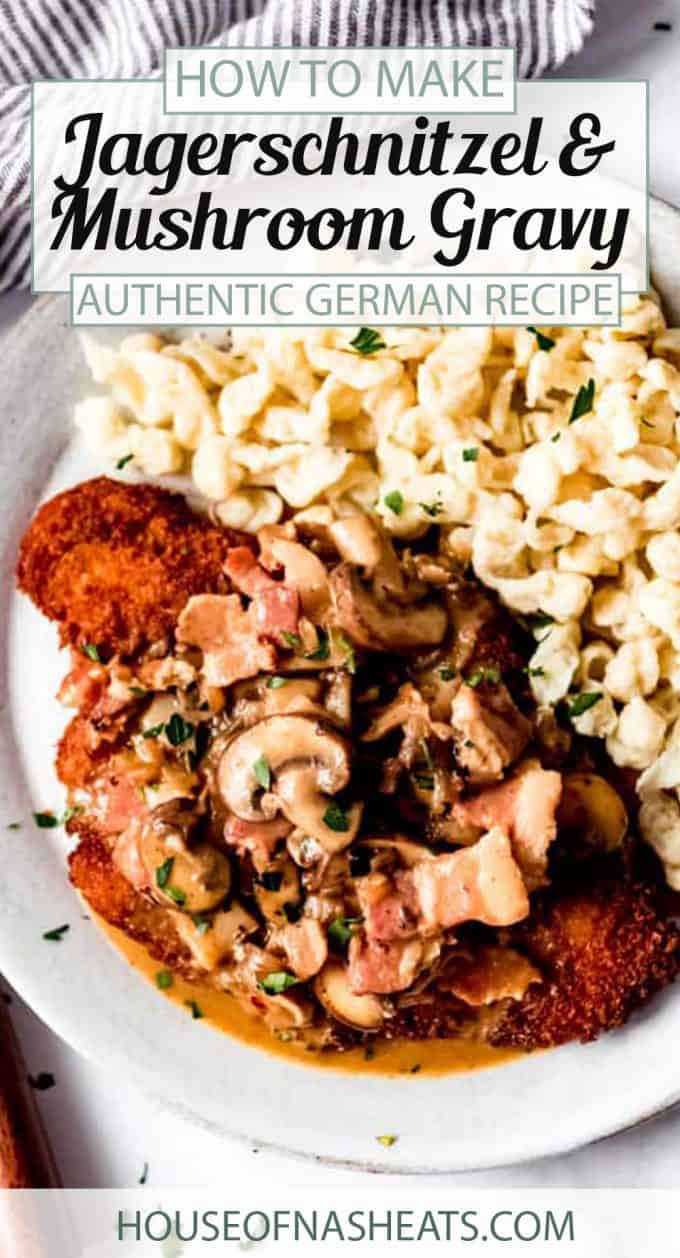 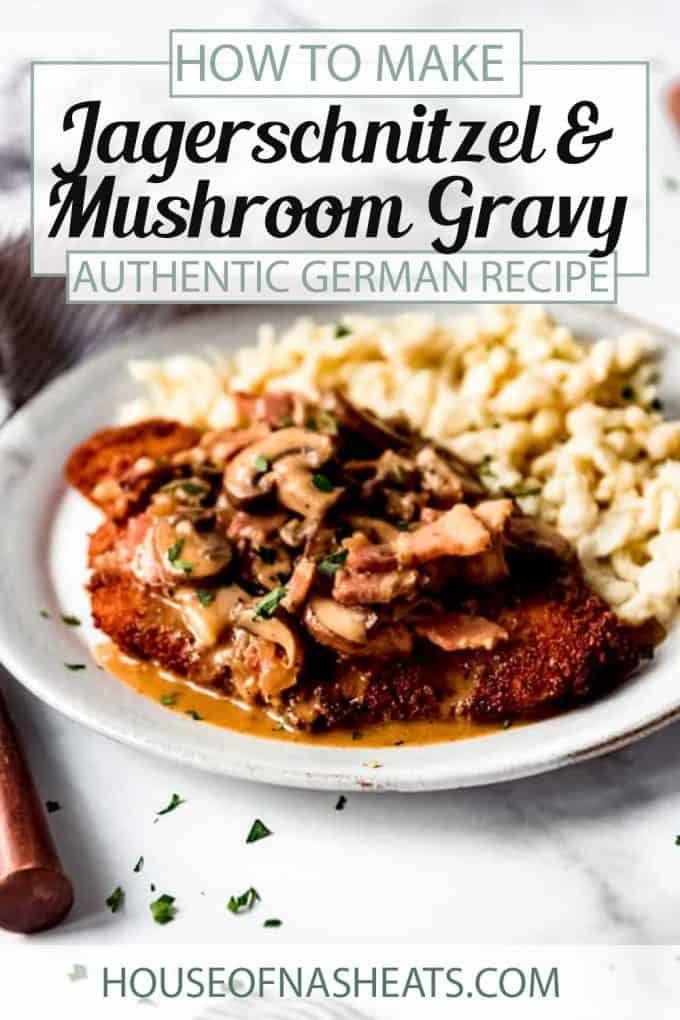 Jagerschnitzel with bacon mushroom gravy will become a family favorite in no time! This easy German dinner recipe is quick to make and perfect with spaetzel, egg noodles, or even mashed potatoes. This easy Jagerschnitzel recipe looks and tastes like you've been in the kitchen all day, but is ready in less than an hour!

We love Germany and classic German food! Some of our favorite traditional German recipes include Sauerbraten, Rotkohl, and for something a little more sweet, this German Apple Cake will blow your tastebuds away!

When I was in high school choosing a language to study, I chose German, largely because my dad had lived in Austria for two years in his early 20's and I thought it would be fun if only he and I could speak German together. I went on to study it in college and briefly considered minoring in German for a while. So when I had the opportunity in law school to work for a big international law firm out of their Frankfurt office, I jumped on it!

Paul was able to land a legal internship in Germany as well through some fortunate connections, and we spent a lovely summer enjoying the country I had dreamed about for so many years. It's one of our favorite countries and every year one of our favorite Christmas traditions is to do a full German dinner one night, often at our favorite authentic German restaurant, Speisekammer, where they serve jagerschnitzel made this way. I had to recreate it at home!

This jagerschnitzel is one of our all-time favorite German foods. It's a classic German-Austrian recipe made by pounding, breading, and frying pork chops to crispy perfection, and then smothering them with a rich and creamy bacon mushroom sauce. The recipe varies depending on what region of Germany or Austria you are in, but it is always extremely decadent and absolutely delicious!

This German-inspired Jagerschnitzel dinner might look and taste complex, but it's actually fairly quick and easy to make, and even better, it's ready in less than an hour. Jagerschnitzel with spaetzel (a type of homemade German pasta) is a great family dinner idea for weekends when you want something special, and you have a little more time to make some classic Jagerschnitzel side dishes like homemade spaetzel or rotkohl (it's German red cabbage and it is DELICIOUS. Don't knock it till you try it!).

Jagerschnitzel is pork or sometimes veal that is pounded very thinly, and then breaded and fried. It gets topped with a creamy mushroom sauce, sometimes with bacon (like this recipe!). Jagerschnitzel itself is found originally in both Austria and Germany, and in German means "hunter's schnitzel". In east Germany the have a version made with Jagdwurst sausage and no sauce.

An even more traditional way to prepare Jagerschnitzel is with veal escalopes and no breading, although the version we're making is commonly more popular today. I think I'll stick with my breaded pork chops, which are easy to come by here in the States and super delicious. Nothings beats that crunch and flavor!

How to Make Jagerschnitzel

What do I serve with this recipe?

Here are a few traditional side dishes to go along with your Jagerschnitzel:

What is the different between Jagerschnitzel and Weiner Schnitzel?

Weiner Schnitzel is flat-pounded meat just like Jagerschnitzel, however, it's usually made with veal instead of pork. Jagerschnitzel also has a mushroom sauce whereas weiner schnitzel doesn't.

I don't have a meat mallet. How do you flatten meat without a mallet?

You'd want to find something heavy but small enough to get a good grip on it for this job. Here are a few ideas: 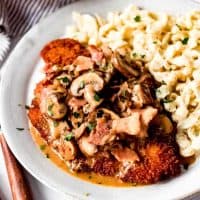 Jagerschnitzel with bacon mushroom gravy will become a family favorite in no time! This easy German dinner recipe is quick to make and perfect with spaetzel, egg noodles, or even mashed potatoes. This easy Jagerschnitzel recipe looks and tastes like you've been in the kitchen all day, but is ready in less than an hour!
5 from 1 vote
Print Pin Rate
Course: Main Course
Cuisine: German
Prep Time: 30 minutes
Cook Time: 15 minutes
Total Time: 45 minutes
Servings: 4 -6 servings
Calories: 801kcal
Author: Amy Nash