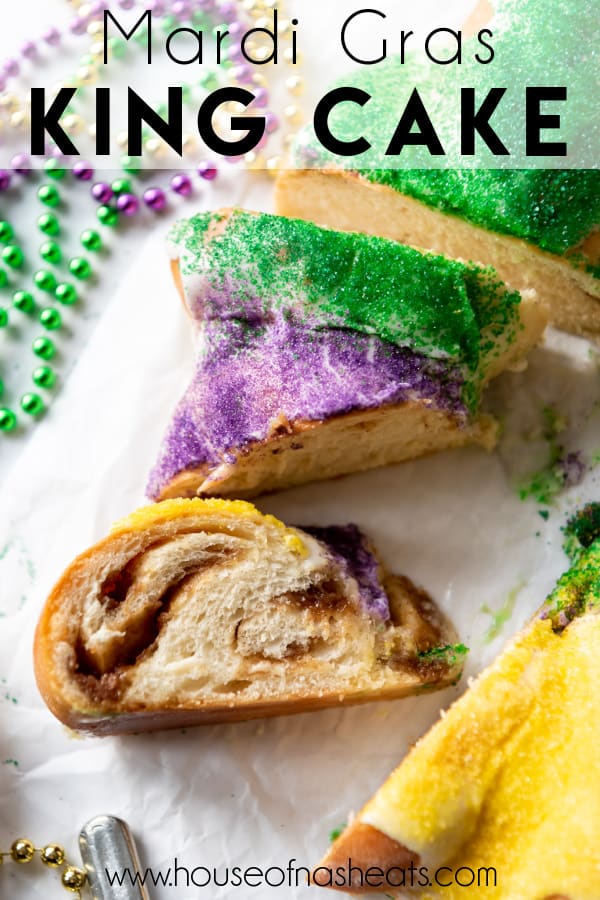 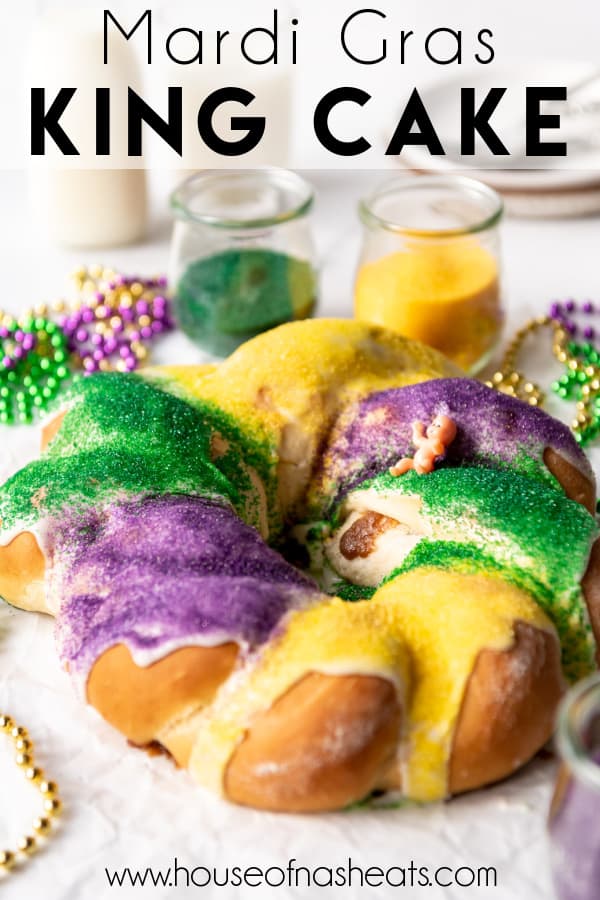 Enjoy this delicious homemade Mardi Gras King Cake this year and let the good times roll! Made with a sweet brioche dough and a cinnamon or cream cheese filling, this is the best king cake recipe and 1,000x better than anything you'll find in a grocery store or bakery!

Celebrating Mardi Gras and wanting a taste of the Big Easy that you can make at home? Try our Instant Pot Red Beans & Rice, Cajun Pasta with Sausage and Peppers, or Beignets next!

I have been wanting to make a King Cake for ages but didn't get to it when I was sharing Louisiana-inspired recipes for my American Eats series, where I visit some of the most iconic foods from each state, one state at a time. You don't have to be in New Orleans to enjoy a colorful classic King Cake when you can make it at home from scratch as easily as making a batch of cinnamon rolls!

We loved this delicious treat and will be making many more King Cakes in the future. The cinnamon sugar-filled version is traditional, but the cream cheese-filled option is our personal favorite. Luckily, the recipe is big enough that it actually makes TWO King Cakes, so you can have one of each!

It might seem like a lot, but it's the same amount as a batch of cinnamon rolls, which I used as the basis for my version of a Mardi Gras King Cake. The dough gets twisted or braided into a crown-shaped circle, then frosted with a delicious icing and topped with green, purple, and gold sugar.

What is King Cake?

If you have never had King Cake before, you can think of it as a cross between a Danish pastry and a giant cinnamon roll shaped like a wreath and covered with colored sugar sprinkles. Except that it can actually be unfilled, or filled with any number of other filling options, like cream cheese filling, fruit filling, almond paste, or chopped nuts.

The cake is shaped like a crown to symbolize the three kings or wise men who visited Christ after his birth. The colors are symbolic too and represent faith (green), justice (purple), and power or prosperity (yellow or gold).

One fun and quirky thing about king cake is the tradition of the tiny baby figurine hidden inside, which symbolizes prosperity and luck. Whoever ends up with the slice with the baby is said to be King or Queen for the day! Our kids were way into this idea and agonized over which slice of King Cake they were going to take in hopes of being the winner.

The lucky one who finds the baby is also supposed to provide the King Cake the following year. Just be careful if you are the one slicing the king cake, because if you slice the baby it's considered bad luck!

I love making symbolic holiday breads not only because they are delicious and fun, but it's a great way to talk to my kids about traditions and symbolism. Hot Cross Buns, Resurrection Rolls, and Christmas Star Bread are some of our other favorites!

You can enjoy a King Cake anytime during Carnival season from January 6th up until Fat Tuesday, but really you can make it any time during the year and just switch up the colors for whatever event you are celebrating!

This recipe takes about 4 hours, start to finish, but most of that is rising time.

Start out by heating milk and butter in the microwave and setting it aside to cool slightly so it doesn't kill the yeast when you add it later.

In a large mixing bowl, proof the yeast for the sweet brioche dough by combining it with warm water and a little sugar. Let it sit for 5-10 minutes until foamy. If you yeast doesn't foam or get frothy and bubbly looking, it probably means the yeast is old and you should throw it out and start over with fresh yeast.

Once the yeast is bubbly, add the warm milk and butter mixture along with the sugar, beaten eggs, vanilla, and salt. Add 2 cups of the flour and mix well.

Continue adding flour, 1 cup at a time, until you have added 5 full cups total and a sticky soft dough has formed. I like to use the dough hook attachment and my KitchenAid mixer to do most of the work, but this can also be done by hand.

Knead on medium speed for about 5 minutes until the dough is smooth and starting to clean the sides of the bowl, or by hand for 8-10 minutes. If the dough is too sticky, add the remaining flour, but keep in mind that the dough should be very soft.

I always like to scrape out the dough onto a lightly floured surface right at the end and do a few final kneads by hand to shape the dough into a smooth ball and get a feel for the dough and whether it needs more flour.

Add a drizzle of oil to the bowl and return the ball of dough to the bowl, turning to coat with the oil. Cover with plastic wrap and let rise in a warm place until doubled in size, about 1-2 hours. Because this is an enriched dough, it takes longer to rise than some other yeast doughs you might be familiar with. I gave mine a full 2 hours since my house was chilly.

Punch dough the dough and turn it out onto a clean, lightly floured surface. Divide in half and set one half of the dough to the side for your second King Cake.

Make the cinnamon sugar filling by combining sugar, cinnamon, and flour in a bowl with the melted butter. Stir until combined into a crumbly filling.

If you are using the cream cheese filling, beat the softened cream cheese, powdered sugar, butter, and vanilla in a bowl until smooth.

Both filling recipes are easy to cut in half so you can fill each of your King Cakes with a different filling flavor.

Roll out into a large rectangle that is roughly 10"x16" and cut in half lengthwise with a pizza cutter or sharp knife. Another popular approach is to cut the dough into thirds for a 3-strand braid, but after trying both approaches I liked the look and easy of the 2-strand twist best myself.

Crumble and sprinkle the cinnamon-sugar filling evenly over each section of dough.

Roll up each section of dough from the long edges, pinching the dough together to secure the filling inside as best you can.

With the two lengths of dough side by side, twist one over the other, repeating the motion to form a rope. Transfer the twisted dough onto a baking sheet lined with parchment paper and shape it into an oval, pinching the ends together.

Repeat with the other half of the dough and filling. Cover both trays loosely with plastic wrap and let rise for 30-45 minutes until puffy.

Bake for 25-28 minutes until golden brown on top. I like using a digital thermometer to probe the center of my loaf in a few places to make sure the internal temperature is between 190° and 195°F to know if the cake (bread?) is done.

I also found that the cake made with the cream cheese filling took a minute or two longer to bake than the cinnamon one.

Remove from the oven and let the cake cool completely before frosting. This is a good time to stick your plastic baby figurine into one of the folds of the cake to hide it.

Once the cake has cooled, make the frosting by beating powdered sugar, milk, butter, lemon juice, and vanilla extract in a bowl until smooth and pourable, but still thick.

Drizzle the frosting over the cooled cake, spreading it out with a spatula for even coverage, then immediately sprinkle with the colored sugars before the frosting has a chance to set.

That's it! Now slice the cakes and see who gets the baby!

While we think of this as primarily a dessert, some people enjoy it as a sweet breakfast bread or coffee cake. The choice is yours!

What is Mardi Gras?

The Carnival season begins on January 6th every year, which is Twelfth Night or the Feast of the Epiphany, marking the end of the 12 days of Christmas. Mardi Gras is the culminating event on Fat Tuesday, and it marks the end of the season of Carnival. It's always 47 days before Easter and the day before Ash Wednesday, which is the start of Lent, a 6-week period of fasting leading up to the Easter holiday. During Mardi Gras in New Orleans, there are parades, masked balls, parties, and just general merry-making by pretty much the entire city.

How did King Cake become part of the Mardi Gras celebration?

This tradition was part of the Catholic celebration of the Epiphany and was brought over from France in the 1800's to Louisiana, where it became part of their Mardi Gras festivities.

Can I bake the plastic toy baby into the cake?

Theoretically yes, most of these toy babies are made to be baked into the King Cake, but I worry about that and find it's not hard to just push it down into the folds of one of the braids before covering the cake with the icing. And to be honest, I forgot on my second one and decorated the whole cake before remembering so I stuck it down in through the frosting, then covered it up with more sprinkles and nobody could tell.

Can I make my own colored sugar?

If you have a hard time finding the colored sugar, you can always order it online or make your own! All it takes is a few drops of food coloring and ½ cup of granulated sugar in a jar with a tight fitting lid. Just combine them in the jar and shake well until the sugar is evenly dyed. But I usually have no trouble finding my colored sugar at craft stores though like Joann's, Michael's, or Hobby Lobby. 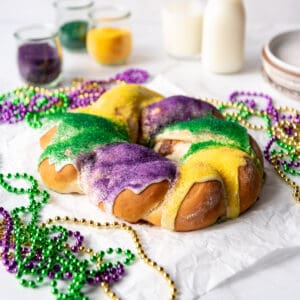