How about a little taste of classic New Orleans and Mardi Gras with this recipe for Shrimp Etouffee? This wonderful shrimp dish starts with a dark, rich roux loaded with the "holy trinity" of Cajun cooking, which turns into a sauce that smothers each delicious shrimp. Serve it with white rice for Sunday supper or to celebrate Fat Tuesday!

I'm getting a little bit of a head start on Louisiana for my American Eats series with this delicious Shrimp Etouffee since Mardi Gras is coming up next week! For the most part I'm going in order, but every now and then a dish like this just won't wait for me to get around to the state it belongs to!

What is Shrimp Etouffee and How Do You Pronounce It?

If you have never heard of it before, shrimp étouffée (pronounced AY-too-FAY), is shrimp smothered in a rich gravy. Literally, the word étouffée is French for "smothered".

While I'm sharing a shrimp etouffee recipe here, it could be made with other shellfish instead, like crawfish or crab. Like many cajun recipes, the ingredient list is long and may look intimidating, but it's actually quite a simple dish to make with a well-stocked spice cabinet.

Unlike gumbo, which is more like a soup, shrimp etouffee is closer to a stew that is really delicious served over rice, which is traditional.

What is Cajun food?

I love Cajun food and it's big, bold flavors. I think it commonly gets misunderstand for just being "spicy" but that's not really an accurate depiction of what Cajun food is, even though yes, some Cajun cuisine is spicy, like the Cajun grilled chicken salad with creamy Cajun dressing that uses Cajun spices without being authentically Cajun.

Instead, think of authentic Cajun food as more highly seasoned rather than just spicy hot. This shrimp etouffee, for example, is hardly spicy at all.

Think of Cajun food as primarily comfort food created by French immigrants by way of Canada who lived out in the swamplands of Louisiana. They used primarily local ingredients to cook simple but delicious, majorly flavorful meals.

Another staple of Cajun cooking is a "roux". But while a French roux is made from butter and flour that are cooked together, Cajun roux is a bit different. It can be made with different fat sources, like vegetable oil, that allow the roux too be cooked longer and darker, obtaining a deep, totally unique flavor base for a dish.

For my shrimp etouffee recipe, I make a dark brown roux with vegetable oil and flour that cooks slowly over anywhere from 22-27 minutes to develop a deep, amazing flavor for the sauce.

You don't have to make the dark brown roux if you are short on time. Many shrimp etouffee recipes call for a light or blond roux made by cooking the flour and oil for just 5 minutes, and it's still an authentic etouffee. However, I think that might be more of a Creole version of etouffee rather than a Cajun one.

I think that there might be some additional distinctions between Creole and Cajun versions of etouffee like the inclusion or exclusion of tomatoes and some slight seasoning differences. To be honest, I just don't have enough background to distinguish between the two any more than I have already done.

But I'm fairly certain that my version of shrimp etouffee with a dark brown roux is closer to Cajun than Creole, for what it's worth.

For a really great article about Cajun cuisine and some of the differences between Cajun and Creole cooking, this article is super interesting.

How to Make Dark Brown Roux for Shrimp Etouffee

Since my knowledge of authentic Cajun cooking is limited, I relied on one of my favorite food blogs, Little Spice Jar, in creating my shrimp etouffee recipe. She gives a fantastic breakdown of the stages of making a roux for shrimp etouffee that I found super helpful.

Essentially, to make a dark brown roux, you start by whisking flour into hot oil in a heavy bottom pot. Then it's just a matter of stirring over medium to medium-high heat until you achieve the state of color and flavor you want for your shrimp etouffee.

I'm obviously not from Louisiana, so take this with a huge grain of salt. But all my obsessive researching has led me to this conclusion.

The thing to remember when making a dark brown roux is that it takes time and patience. You don't want to stop stirring the roux or you run the risk of burning it. You can lower the heat from medium-high to medium if you feel like the roux is going through the stages too quickly.

I know the effort it takes to make a dark brown roux isn't for everyone, but I have to say that this dish, like bolognese sauce or risotto, two other classic dishes with some time requirements, is totally worth it. I actually find it fairly therapeutic to stir the roux and watch it go through it's stages of flavor development.

How to Make Shrimp Etouffee

Before you ever start making your shrimp etouffee, be sure to have all your ingredients ready to go. There is another French term (so much French in this post!) known as "mise en place" which basically means preparing everything you need for the recipe before you start cooking.

Don't start your roux thinking you can stop and chop the onion, celery, and bell pepper midway through making the roux. Have everything set before you start to cook.

It's a good practice that professional chefs are taught in culinary school, and one I am trying to implement more often in my own cooking because it makes the process so much more enjoyable.

Aside from that, once you've made the roux, the hard part is done! All that is left is to saute the vegetables in the roux for about 5 minutes until they start to soften, adding the garlic right at the end.

Then it's' just a matter of stirring in the stock (I cheat by not making homemade shrimp stock and instead using a combination of chicken stock and clam juice) and seasonings, bringing everything to a boil, then decreasing the heat to let the etouffee simmer for about 15 minutes.

Add the shrimp right at the end since they only take 3-5 minutes to cook, then throw in a bit of butter for that extra bit of richness that really finishes off this wonderful dish and serve the shrimp etouffee over white rice.

If you are interested in celebrating Mardi Gras this year, keep scrolling past the recipe for even more recipes perfect for Fat Tuesday from some of my food blogging friends who I joined up with today to celebrate Carnival even though we aren't in New Orleans!

Even more recipe from Louisiana 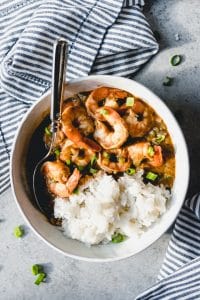 4.55 from 11 votes
Amy Nash
Prep Time 15 mins
Cook Time 45 mins
Total Time 1 hr
Course Dinner
Cuisine American
Servings 6 people
How about a little taste of classic New Orleans and Mardi Gras with this recipe for Shrimp Etouffee?  This wonderful shrimp dish starts with a dark, rich roux loaded with the "holy trinity" of Cajun cooking, which turns into a sauce that smothers each delicious shrimp.  Serve it with white rice for Sunday supper or to celebrate Fat Tuesday! 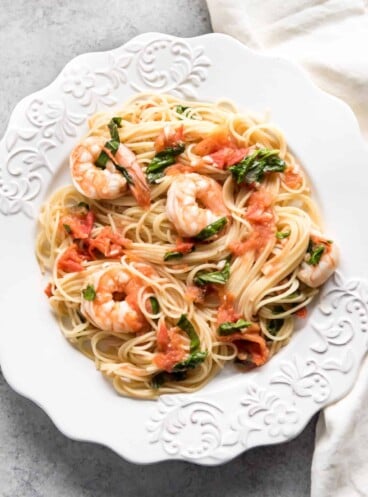 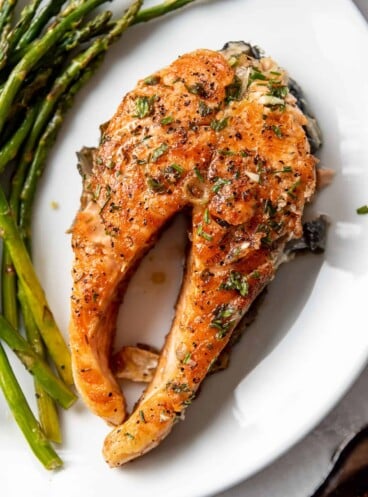 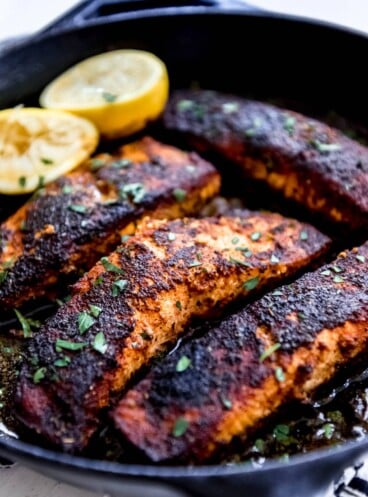 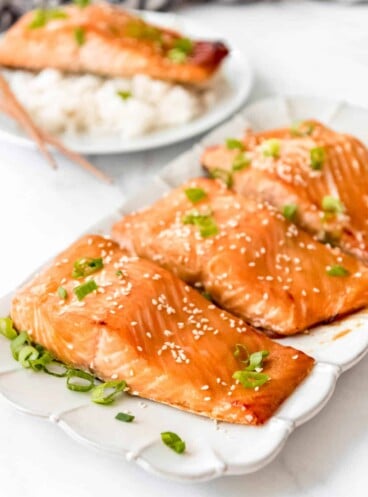