Super creamy, cheesy, and delicious, this Copycat Costco Mac and Cheese is the ultimate comfort food made with five different kinds of cheese.

When it comes to macaroni & cheese, nobody does it as well as Costco, in my opinion. It's my favorite! The flavor is just amazing and it's so creamy and comforting and gooooooooood.

I have tried lots of mac & cheese recipes over the years but hands down this one is the best. So naturally I had to recreate it at home. The only other copycat Costco mac and cheese recipes I saw called for alfredo sauce, which didn't seem right to me, so I looked up the ingredients listed on the Costco mac & cheese package and went from there. And I'm pretty confident that I nailed it.

This tastes just like my favorite cheesy comfort food from Costco! It's perfect as a main dish for a meatless Monday, but it's also awesome served as a side dish with my favorite BBQ Beef Brisket.

There are a couple of key components to making this mac and cheese just like the Costco kind.

The heavy hitters are really just a good white cheddar and a gruyere (which melts down amazingly well), but there is also Romano, Parmesan, and a little bit of medium cheddar sprinkled over the top (mostly for color, if I'm being totally honest).

While you could totally make this mac & cheese using other cheese varieties like Emmental or Gouda or American (and I'm sure it would taste wonderful), I stuck with the ones listed on the Costco package since that was the exact flavor I was trying to recreate.

I also used cavatappi pasta instead of elbow macaroni noodles. You can use whatever you have on hand, but Costco uses cavatappi and they are such cute, squiggly little corkscrews (cavatappi literally means "corkscrew" in Italian apparently) so......

While your pasta is cooking to a barely, barely (and possibly even slightly underdone al dente), prepare your béchamel sauce, which is just a roux of butter and flour cooked together with milk whisked in until a nice, moderately thick white sauce has formed.

Then you stir in half of the cheese and some seasonings like paprika and garlic powder before combining the sauce with the cooked and drained pasta.

Because the sauce is hot and you are going to bake the macaroni & cheese in the cheese sauce in the oven for just a bit, you definitely don't want to overcook your noodles when boiling them.

I find that if I follow the pasta manufacturer's instructions for cooking the pasta al dente and stop just 1 minute to 30 seconds shy of their recommended time that it turns out just right.

Dump half your pasta & sauce into your baking dish and sprinkle half of the remaining cheese over top, then dump the remaining pasta and sauce over the cheese layer and repeat with a final layer of cheese sprinkled over top. The layering of the grated cheese over the cheese sauce is what makes this copycat Costco mac and cheese extra super gooey and cheesy and wonderful - just how I like it.

Then you bake it just long enough to melt all the cheese and scoop it out.

Seriously, this stuff is ah-maze-ing and I love, love, love it. I hope you will too! 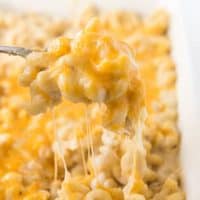