This homemade Chicken Spaghetti Casserole is adapted from the Pioneer Woman's recipe and uses a shredded Costco rotisserie chicken to make it easy to throw together on a weeknight. Perfectly al dente pasta combine with a made-from-scratch cream of mushroom soup sauce with chopped green pepper, pimentos, diced onion, and a generous amount of shredded cheddar cheese. This is a family favorite!

We love a good pasta dinner! Some of our other favorites are Chicken Fettuccine Alfredo, 30 Minute Cajun Pasta with Sausage and Peppers, and Homemade Hamburger Helper Cheeseburger Pasta Skillet (with Video!)

The biggest change I made to the Pioneer Woman's original chicken spaghetti recipe was to swap out the cream of mushroom soup in favor of a homemade version. It takes very little additional time, tastes WAY better, and is better for you anyway.

Chicken Spaghetti is one of the best make ahead meals

I love chicken spaghetti casserole because it's such an easy recipe to make ahead and stick in the fridge or freezer until you need it.

All it takes is about 15 minutes of chopping veggies, making the mushroom sauce, and mixing the casserole components together, and then it bakes in the oven until hot and bubbly. The beauty of it is that you can make the casserole a day or two in advance and it tastes just as good when you finally decide to bake it as when it was first made.

Chicken spaghetti also makes a great freezer meal! You can freeze this chicken spaghetti recipe for 2 months, then thaw in the fridge overnight. It's one of those recipes that I keep in my back pocket for taking to friends who have had babies or are dealing with family health issues because it can be ready and on hand whenever they need it.

It's honestly not a bad idea to double the recipe and make two casseroles as long as you are making one. Especially since you only need half of a green pepper and half of an onion to make one casserole. Keep one in the freezer to have on hand for a busy weeknight or give one away to a friend in need!

How to Make Chicken Spaghetti 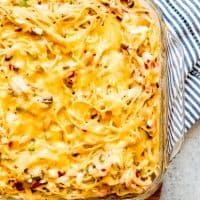 I use a rotisserie chicken from Costco that I pull the meat off of and shred, but the Pioneer Woman's original recipe calls for 1 cut-up fryer chicken to be placed in a large pot of water, brought to a boil, then simmered at medium heat until cooked through, about 25 minutes. Really, any cooked chicken would work, included oven roasted chicken breasts, leftover BBQ chicken, etc. To Freeze: Assemble the casserole, then cover tightly with foil and freeze. Thaw in the fridge overnight when ready to use, then pull out and set on the counter while the oven preheats for about 15 minutes. Bake as directed above until hot all the way through. Adapted from "The Pioneer Woman Cooks".

Also, be sure to check out these amazing weeknight pasta bakes shared by some of my food blogging friends today! These are perfect for back-to-school!