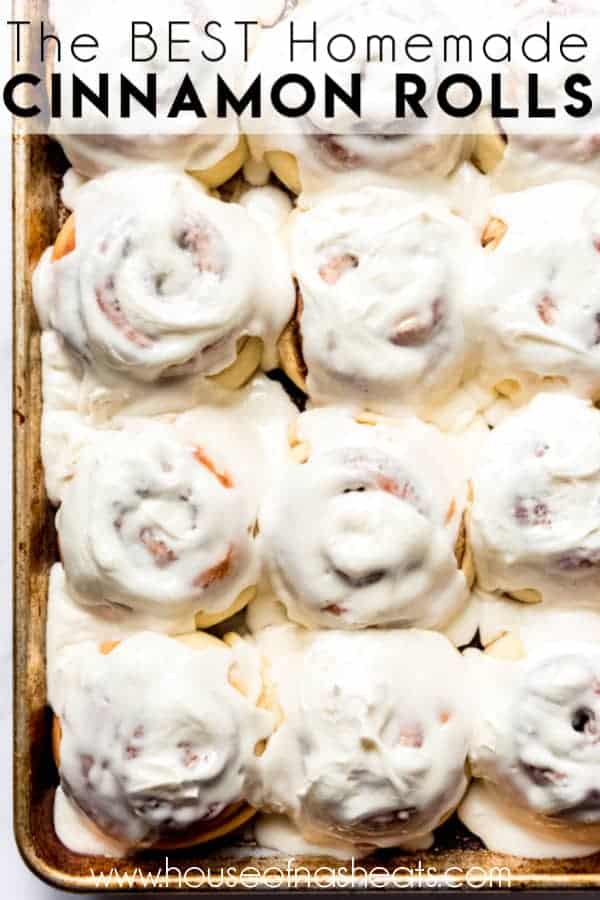 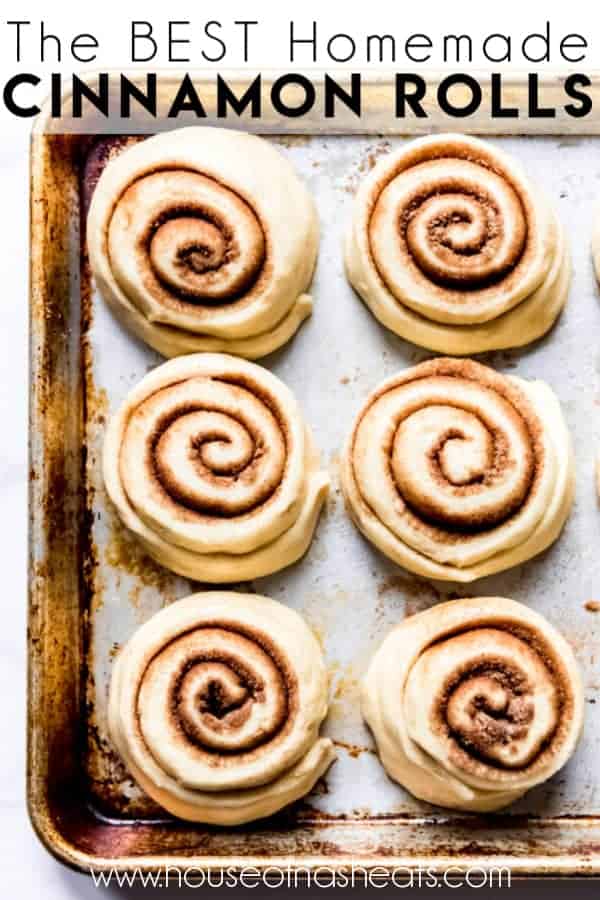 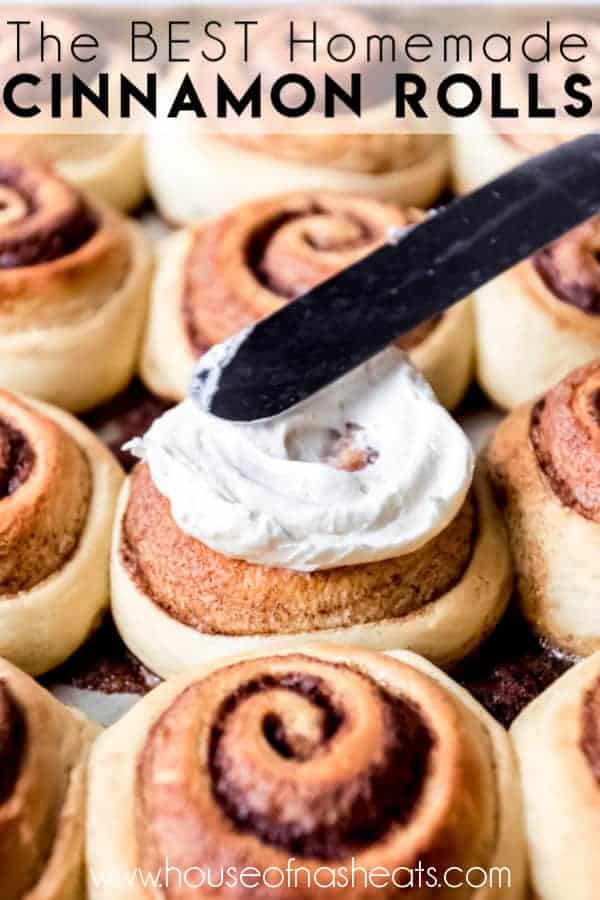 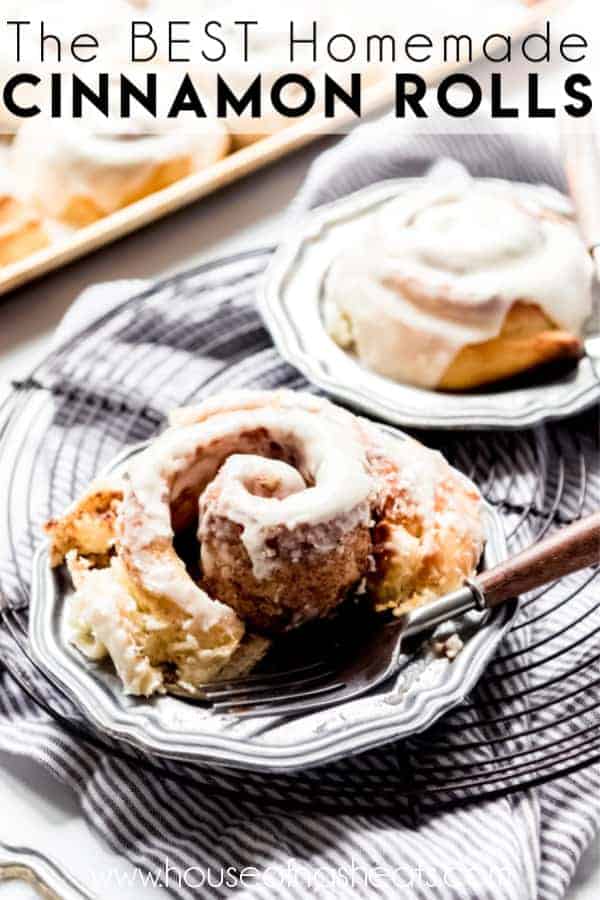 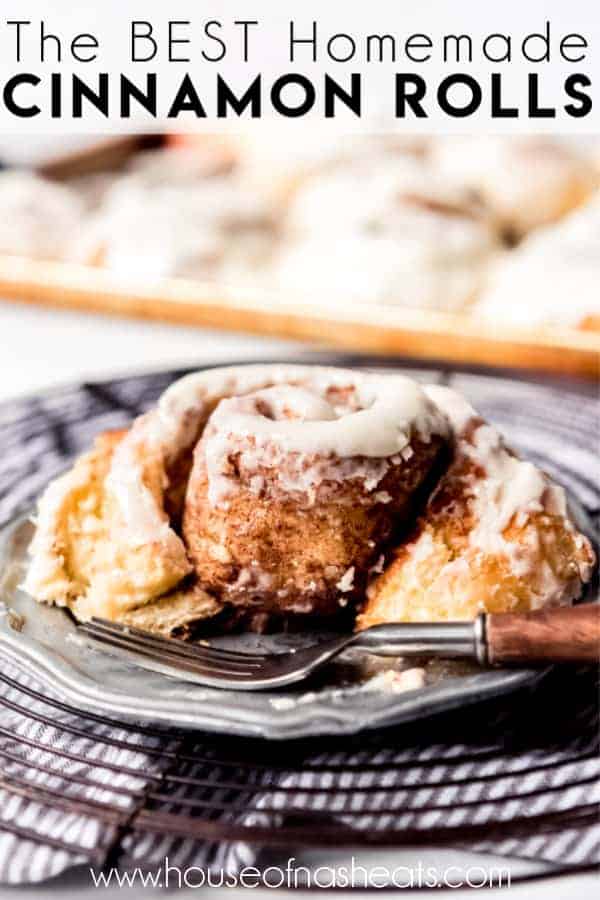 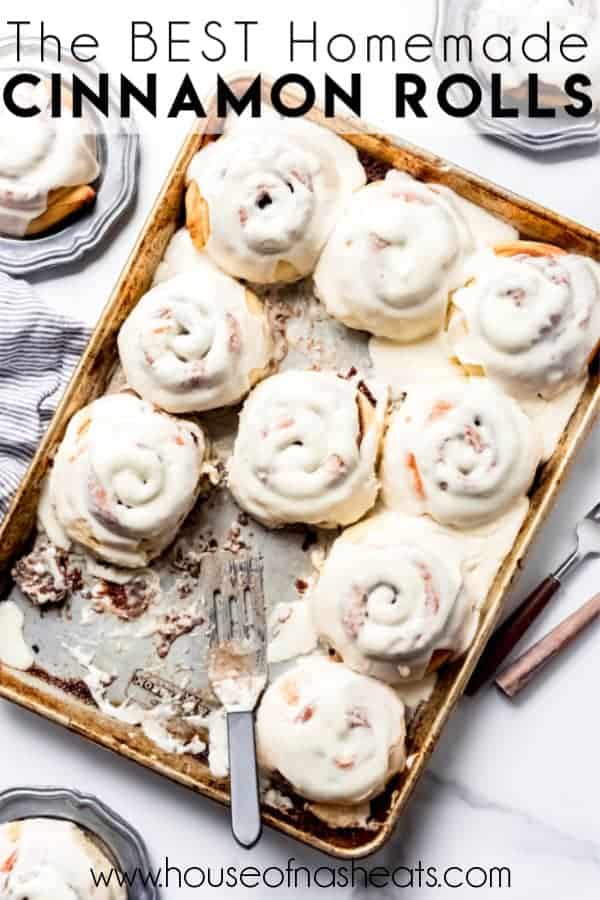 These big, soft Homemade Cinnamon Rolls are made with a rich, easy yeast dough and generous amount of cinnamon, sugar, and butter swirled in the middle. Then they are topped in a simple vanilla icing for the most amazing breakfast treat of your life!

Nothing says "I love you" like a special breakfast. Some of our other favorites are Pecan Sticky Buns, homemade Crepes, Cowboy Quiche, and Sour Cream Coffee Cake (another must make if you love cinnamon-forward treats!).

When it comes to cinnamon rolls, my checklist looks something like this:

These cinnamon rolls check all the boxes and then some. The dough is sweet and so soft. And the filling is cinnamon-sugar perfection with a couple of extra additions that will make these the best cinnamon rolls you have ever had. Using a mix of brown sugar AND granulated sugar in the filling gives a more interesting flavor and the cornstarch lends a silky texture that helps keep the filling soft and smooth.

I have made dozens and dozens of batches of cinnamon rolls and held off posting thiss recipe for YEARS in my quest to find the BEST cinnamon roll recipe. It feels like I have tried every version under the sun, from Cinnabon copycat recipes to shortcut no-yeast cinnamon roll recipes. But this version is the one I keep coming back to time and time again because of it's ease, simplicity, and because they are just so darn incredible!

I decided to share my cinnamon roll recipe to represent Kansas in my American Eats series where I'm sharing the foods that each state is known for, one state at a time. It's not because cinnamon rolls are from Kansas (I don't actually know where they originated), but because the first thing anybody from Kansas has mentioned to me when I've asked them what food best represents their state is the combination of cinnamon rolls and chili, served together.

Apparently this trend started in the 1960's, when many schools in the midwest would serve chili and cinnamon rolls for hot lunch and it was the highlight of the week for the kids.

This wasn't too surprising for me since I grew up in neighboring Nebraska, where chili and cinnamon rolls is also a thing. It's the sweet & spicy combination that makes these two foods the perfect cold weather comfort food pairing and popular in many midwestern states, including South Dakota as well.

Now whether you actually eat them together - scooping up chili with pieces of cinnamon roll to pop in your mouth - or just have the cinnamon roll as dessert right after finishing a bowl of chili (my personal preference) - it's totally up to you.

Making cinnamon rolls is easier than you think

I say this is an easy cinnamon roll recipe because even though it involves yeast and a rise time, the actual amount of work and know-how that goes into making these cinnamon rolls is minimal. The dough takes all of 10 minutes to whip up in a stand mixer that does the kneading for you. Even if you have never worked with a yeast dough before, these cinnamon rolls aren't that hard to make and have them turn out incredible.

Then after letting the dough sit on the counter to rise for an hour or so, it takes another 10 minutes of work to roll it out, spread it with melted butter and cinnamon sugar, then roll them up and slice them.

When it comes to topping your cinnamon rolls, there are a few different ways to go. A lot of people love cream cheese icing, which makes extra decadent cinnamon rolls and can be a good way to go.

But after multiple rounds of recipe testing, I came to the realization that most of the cream cheese icing I tried had an overpowering flavor of cream cheese that took away from the actual cinnamon roll itself. I found that I prefer a simple vanilla icing with only a tiny amount (just 2 ounces) of cream cheese instead of a full brick like in most cream cheese frosting.

How to make cinnamon rolls

You can easily make these cinnamon rolls in advance by kneading, rising, and rolling out the dough the night before. After shaping the cinnamon rolls and placing them on the baking sheet, instead of letting them rise right away, cover them with plastic wrap and place them in the refrigerator overnight.

The night morning, let them rise for 1 to 1 ½ hours until puffy, then bake like normal and frost.

How long are cinnamon rolls good for?

If you keep them properly stored in an airtight container, you can expect them to last about 3 days and still taste great. After that, they tend to dry out and become stale.

I will purposely reserve 4 of the cinnamon rolls without frosting sometimes knowing that I'm going to make cinnamon roll french toast a few days later, just to save myself the bother of scraping off the frosting. It's SO good! 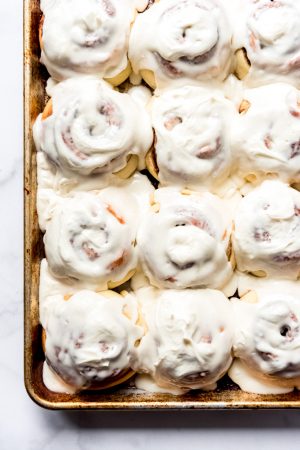 5 from 1 vote
Amy Nash
Prep Time 45 mins
Cook Time 16 mins
Additional Time 1 hr 30 mins
Total Time 2 hrs 31 mins
Course Breakfast
Cuisine American
Servings 12 large cinnamon rolls
These big, soft Homemade Cinnamon Rolls are made with a rich, easy yeast dough and generous amount of cinnamon, sugar, and butter swirled in the middle. Then they are topped in a simple vanilla icing for the most amazing breakfast treat of your life! 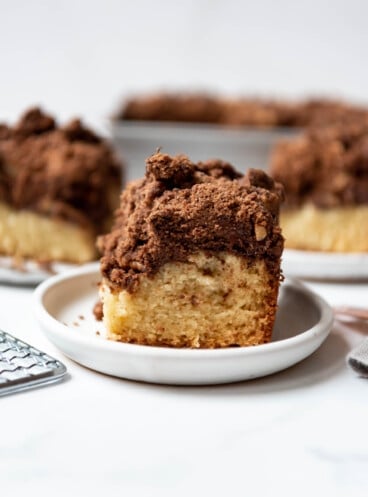 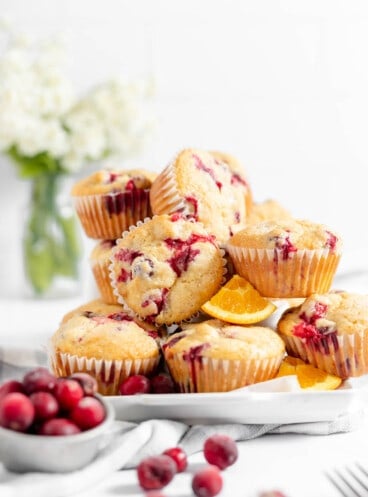 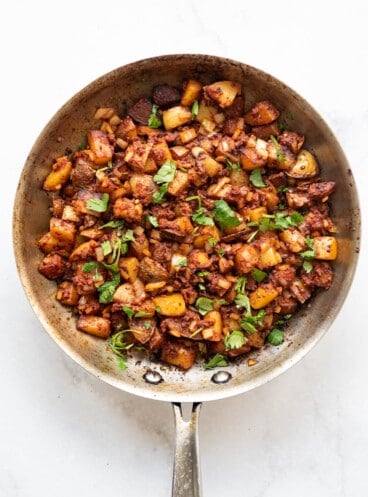