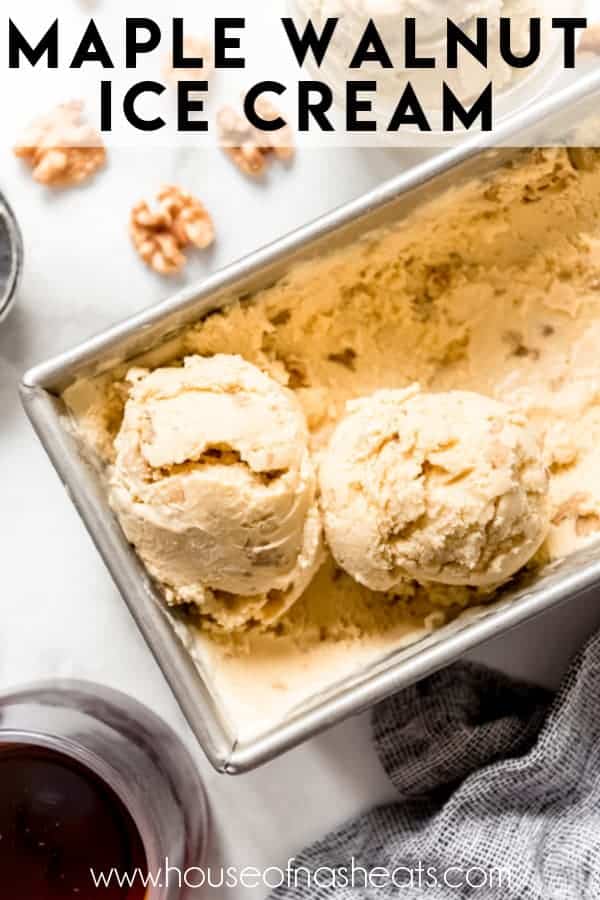 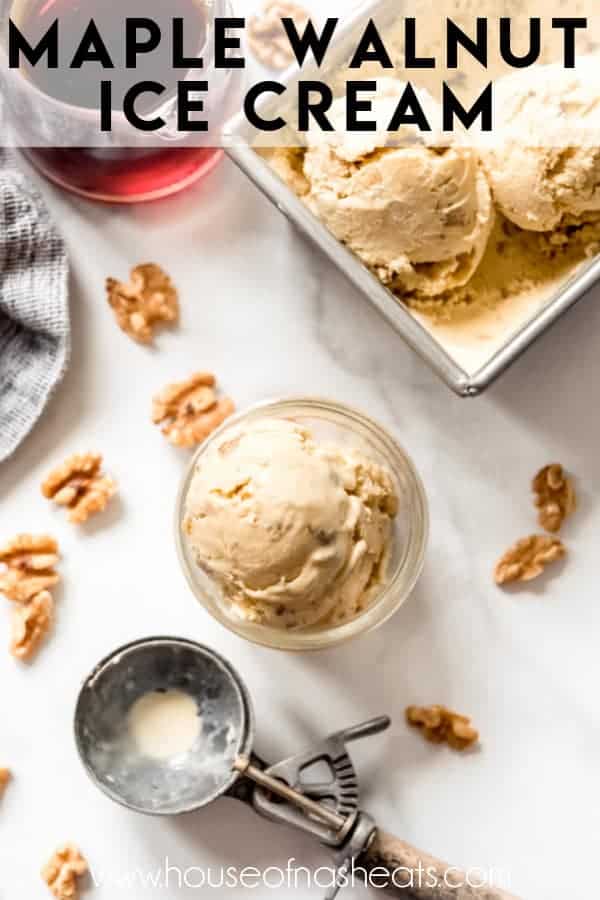 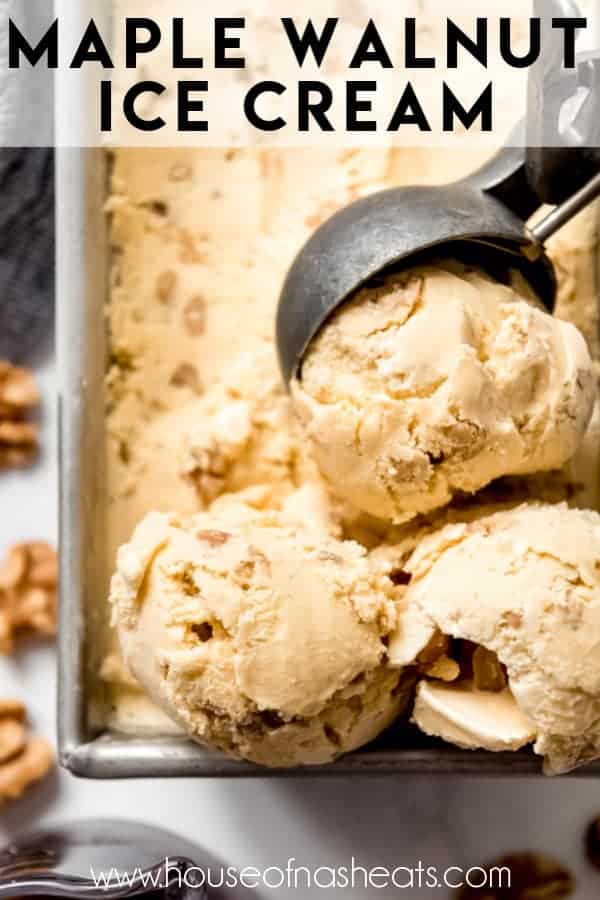 This Maple Walnut Ice Cream recipe has a custard base made with real maple syrup and there are pieces of toasted walnut in every bite! It's an old-fashioned classic flavor that is mostly only seen on boardwalks and ice cream shops these days, but deserves to be made popular again!

Homemade ice cream is one of our favorite things to make! If you have an ice cream churn and are looking to try new ice cream recipes, be sure not to miss our Toasted Almond Ice Cream, Rainbow Sherbet, Homemade Strawberry Ice Cream, Coconut Macadamia Nut Ice Cream, and Cherry Vanilla Ice Cream!

It seems like there are two kinds of people in the world: those who prefer things with nuts and those who don't. I have always been the type to prefer nuts ever since I was a kid. I love them in brownies, in fudge, in salads and jellos, in my banana bread, and even in main dishes like my macadamia nut crusted mahi-mahi.

So it's unsurprising that maple walnut ice cream was always one of my favorite flavors of ice cream when I was growing up. When we would go to old-fashioned ice cream counters and maple walnut was on the menu, I would always get a double scoop and one of them was usually maple walnut.

It's such a rich, unusual flavor with the maple coming through sweet and strong, but not overpowering when done right using real maple syrup that we simmer down to help concentrate the flavor a bit.

And the chunks of toasted walnuts are my favorite! Pecans would do just as well in this ice cream and go great with maple, but walnuts have always been my favorite nut. Toasting them brings out their natural oils and brings out that wonderful flavor that holds its own against the maple.

This is a custard based ice cream, which means we are heating some milk and cream with sugar, then pouring the hot liquid over egg yolks to "temper" the eggs. Which is just fancy chef-speak for gently bringing up the temperature of the eggs so they don't scramble when added to the hot ice cream base.

The egg yolks not only add richness to the ice cream, but they make it creamy and scoopable instead of icy.

Toast the walnuts: This ice cream recipe starts a little different from most. First the walnuts need to be toasted, either in the oven on in a dry pan on the stovetop. I prefer the oven because I can just set a timer instead of standing by the stove stirring nuts.

Let the nuts cool, then roughly chop them and stick them in the freezer until it's time to add them to the ice cream.

You could skip the step of boiling the maple syrup, choosing instead to stir in the maple syrup after cooking the milk and cream and adding the eggs. It would still have a good flavor, but the maple won't be quite as powerful.

Add the cream and milk. When the maple syrup has reduced from ¾ cup to ½ cup, whisk in the heavy cream, milk, and salt. At first the maple syrup may seize up. Continue to heat and gently stir, and it will melt into the milk and cream as they warm up. Meanwhile, whisk the egg yolks in a medium bowl and set aside.

When you notice small bubbles around the edges of the saucepan, remove about 1 cup of the hot milk mixture. Gradually pour it into the whisked egg yolks, whisking the entire time to gently raise their temperature. This process is known as "tempering" the yolks.

Add the egg yolk mixture back to the saucepan. Continue to cook and stir over medium-low heat until the mixture reaches 170-175 degrees F on a thermometer. It doesn't take more than a minute or two. If you don't have a thermometer, the mixture should be thick enough to coat the back of a spoon.

Most ice cream recipes recommend pouring the base through a fine mesh sieve to remove any bits of scrambled egg. But of the hundreds of batches of ice cream I have made I have never bothered with that step. And I have never personally experienced "eggy" ice cream.

Chill the base completely before churning. The ice cream base should be as cold as possible before adding churning to get the best quality result. I'm always impatient for ice cream, so I like to use an ice bath to cool the custard base faster.

Just fill a very large bowl with ice and cold water for an ice bath. Transfer your ice cream base to a heavy-duty gallon-size ziploc bag and place it in the ice bath. The base will chill pretty quickly actually and is usually ready to churn within about 30 minutes to an hour using this method.

Or transfer the mixture to a bowl, cover with plastic wrap, and stick it in the fridge overnight.

How to churn ice cream

Churn the ice cream according to your ice cream maker instructions. Growing up we used a hand-cranked mixer at my grandparent's house in Idaho, where I learned to make ice cream. Eventually my parent got an electric ice cream mixer that still had to be packed with ice and rock salt.

These days, I have a KitchenAid ice cream bowl attachment and a Cuisinart ice cream maker. The Cuisinart is my favorite, but both work well. They make it SO much easier to churn ice cream at home. All you have to do is pour the base into the bowl, start the mixer, and let it work for 10-20 minutes. The only downside is that they only do small amounts of ice cream at a time. You can make about 1.5 quarts in those bowls, which is how this recipe was written. You can double or triple this recipe if using a larger ice cream churn.

You will know the ice cream is done when it starts looking like soft-serve. That's when you add the chopped walnuts and let them mix into the ice cream for 30 seconds or so. 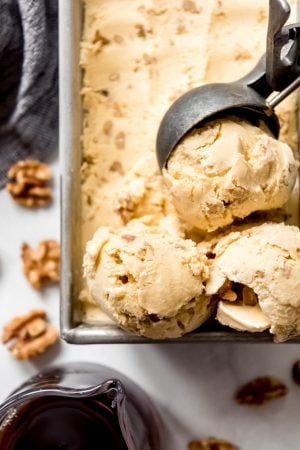 4.59 from 12 votes
Amy Nash
Prep Time 10 mins
Cook Time 10 mins
Additional Time 6 hrs
Total Time 6 hrs 20 mins
Course Ice Cream
Cuisine American
Servings 1.5 Quarts
This Maple Walnut Ice Cream recipe has a custard base made with real maple syrup and there are pieces of toasted walnut in every bite! It's an old-fashioned classic flavor that is mostly only seen on boardwalks and ice cream shops these days, but deserves to be made popular again! 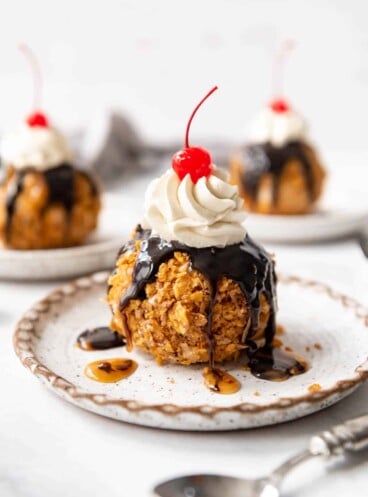 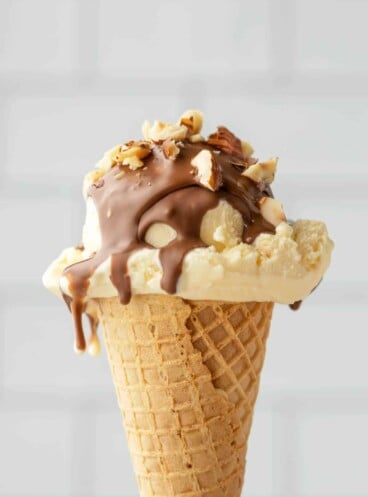 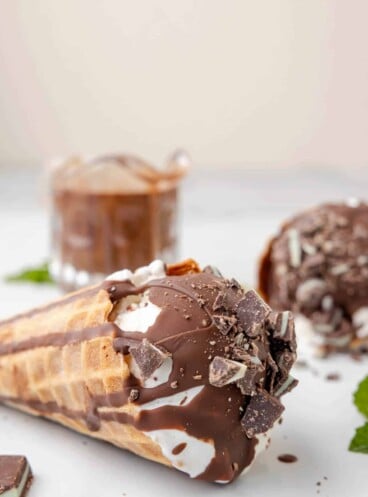