Tart and tangy, with just a little bit of sweet and smoky complexity, this Rhubarb BBQ Sauce is a unique and unexpected twist that is perfect for grilling season! Delicious on grilled chicken, pork, ribs, and burgers, this barbecue sauce is a savory switch-up on an ingredient that is most often found baked into pies!

We love a good barbecue! Some of our other favorite barbecue sauces are Carolina Mustard BBQ Sauce and Alabama White BBQ Sauce.

Whenever rhubarb starts popping up in the store, I stock up because it's so seasonal! The beautiful red-green stalks make an appearance in my area of the country in early spring, although it's season goes through mid-summer depending on where you live geographically.

And if you are lucky enough, you might even have access to a rhubarb plant, which tend to be super hardy and come back year after year so all you have to do is cut off the crown of toxic leaves (yes, rhubarb leaves are poisonous, but the stalks are totally safe and delicious to eat).

Rhubarb freezes well so I always buy lots, then chop it up at home and freeze it in large freezer size bags for use during the off season. You can sometimes find this work done for you in the freezer aisle, too, if your grocery store doesn't have fresh rhubarb in stock.

Then there is rhubarb jam, rhubarb muffins, and more. But I don't see it used in savory dishes as often.

The reason for this is that rhubarb is so tart on its own that it basically requires some sugar to make it edible unless you seriously love pucker-inducing levels of tartness.

But if you think about it's tart and sour tendencies and compare it to lemons, rhubarb can actually go well with fish and meat dishes also.

For my first foray into the world of savory rhubarb recipes, I decided to attempt a homemade barbecue sauce.

Now, I'll admit that I usually buy my barbecue sauce, but this homemade version was so easy to make that it left me wondering why I haven't tried making it at home before now!

Aside from softening the onions, all it takes is to simmer the rest of the ingredients in a pot, then puree in a blender until your sauce is a consistency you like.

If you like your sauce a little more sweet side, add a little extra sugar. If you want it spicy, up the amount of hot sauce or chipotle powder. You can blend it super smooth or leave it with just a touch more texture.

I love how this seriously straightforward rhubarb bbq sauce recipe is totally customizable depending on your preferences.

We always look forward to grilling season and bone-in chicken legs and quarters are one of my favorite cuts of meat on the grill, especially when cooked properly.

Not only are they cheaper than boneless, skinless chicken breasts, but they tend to do better on the grill because the bones and skin help keep the meat moist and juicy instead of drying out.

This technique works for bone-in chicken breasts as well as legs, thighs, and quarters, although the cooking times may need to be adjusted depending on the cut or size of the meat. Here is how we grill bone-in chicken leg and thigh quarters on a gas grill: 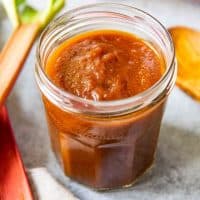 Tart and tangy, with just a little bit of sweet and smoky complexity, this rhubarb BBQ sauce is a unique and unexpected twist that is perfect for grilling season!  Delicious on grilled chicken, but equally tasty on pork, ribs, and burgers, this barbecue sauce is a savory switch-up on an ingredient that is most often found baked into pies!
5 from 3 votes
Print Pin Rate
Course: Dinner
Cuisine: American
Prep Time: 10 minutes
Cook Time: 20 minutes
Total Time: 30 minutes
Servings: 6 servings
Calories: 434kcal
Author: Amy Nash