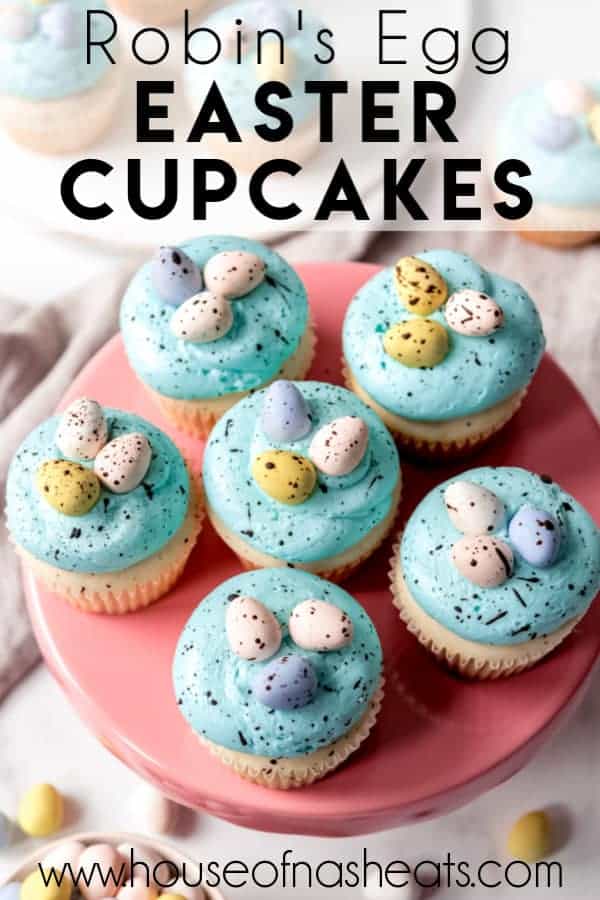 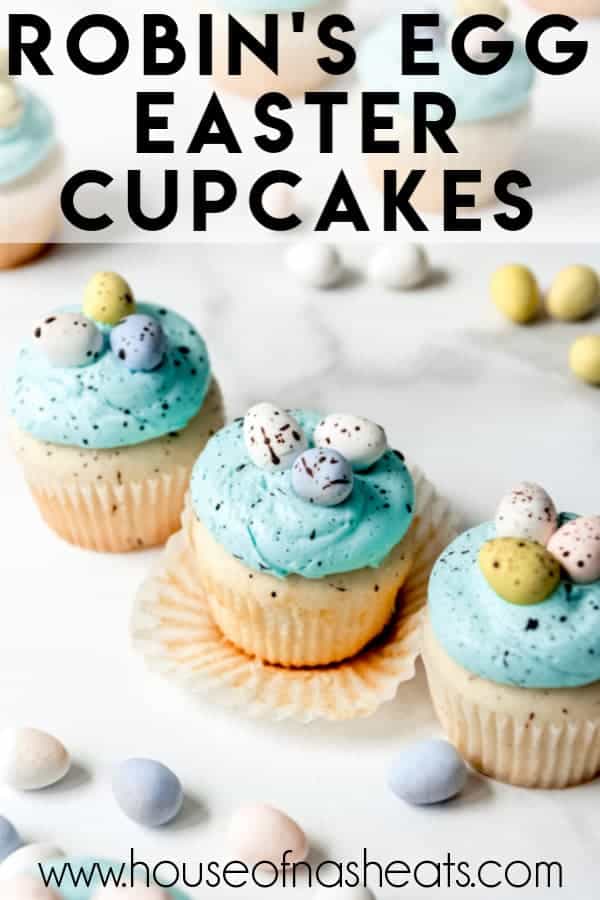 Soft white cupcakes with pale blue buttercream are decorated with Cadbury mini eggs and speckled with spots to make these Robin's Egg Easter Cupcakes that are the perfect festive dessert for a Spring occasion!

Planning your Easter menu? Be sure to include my Brown Sugar Glazed Ham, Scalloped Potatoes, and Italian Peas!

Spring is finally here and all around us there are blossoms blooming and birds chirping!

Which also means it's time to pick up bags of those addictive Cadbury mini eggs again! I don't know what it is about the candy shell surrounding the milk chocolate center, but they are just about the most irresistible candy of them all!

I saw these robin's egg blue speckled cupcakes on Pinterest years ago and haven't stopped thinking about them ever since. So I literally had to buy a bag of Cadbury mini eggs early and hide them just so I could make these before the candies all vanished!

But instead of a chocolate base like the original inspiration cupcake, I wanted a classic white cupcake. And of course I made it from scratch instead of using a cake mix.

It's not that I have anything against cake mixes, but once you try these homemade vanilla cupcakes I doubt you will ever be able to go back to the boxed variety.

Don't say I didn't warn you.

The inspiration also called for canned frosting. For that, I probably will judge you. I won't want to, but it'll likely happen. Make some homemade frosting. It's like just a few ingredients, 4-5 minutes of your time, and it's vastly superior to the canned stuff.

Honestly, my artistic talent is next to zero and I am practically giddy over how pretty and fun these turned out. It's just my kind of decorating - simple, sweet, and effortless. Anybody can do it.

I will warn you that the chocolate splatter kind of goes everywhere. I found the best way to keep it under control was to just prop up a baking sheet behind where I was working, which made for easier cleanup.

How to store cupcakes

Frosted and decorated cupcakes will keep on the counter in an airtight container for 2-3 days, although if you want them to last longer, you can store in the fridge for up to 5 days. Just allow them to come up to room temperature before serving.

If you want to make these cupcakes farther in advance, you can freeze the unfrosted cupcakes for up to 2 months, then pull out, frost, and decorate before serving.

The buttercream frosting can also be made in advance and kept in the fridge for 1 week or in the freezer for up to 2 months. Just allow it to come to thaw completely and come to room temperature, then beat it with a mixer again so it is fluffy and smooth enough to use. 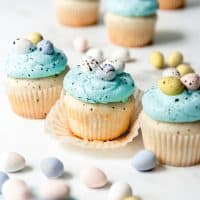