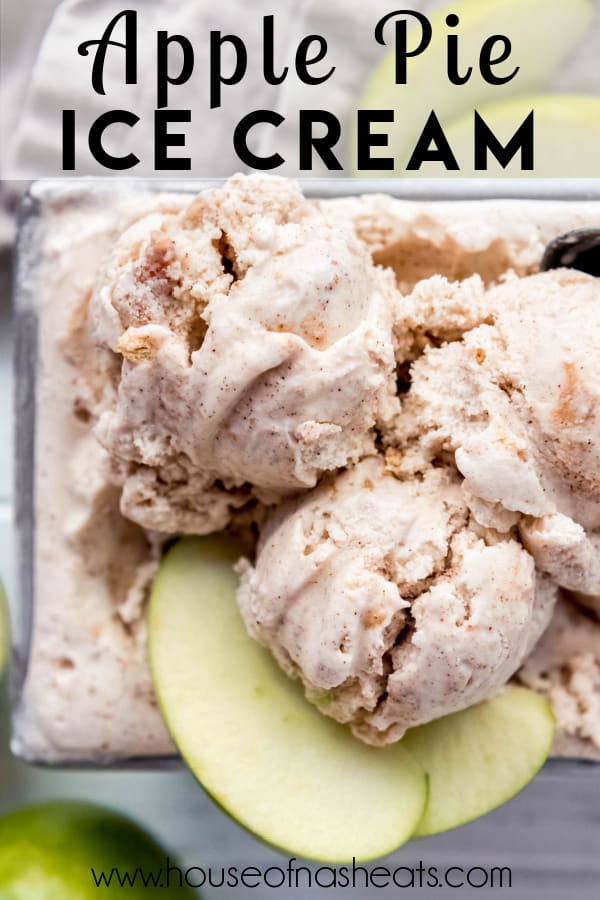 Apple Pie Ice Cream is loaded with cinnamon and apples for a delicious Fall flavored ice cream! Add broken up cinnamon grahams or pie crust pieces to make it like eating a slice of apple pie in ice cream form!

Apple season is one of my favorite times of the year! We make all the apple recipes we can, including reader favorites like Homemade Apple Fritters, Apple Crisp, and German Apple Cake.

We ALWAYS enjoy our apple pie served a la mode, so it just makes sense to make an ice cream version of one of our favorite desserts! And with apples coming into season while it's still plenty hot for the summer, it's a for sure win to enjoy a scoop of apple pie ice cream.

Of course, you can make ice cream year round, and we love seasonal flavors like Pumpkin Ice Cream and Peppermint Ice Cream. What seasonal flavor should I make next? Let me know in the comments below!

Today is Freaky Friday, which is a fun event hosted by my friend Michaela from An Affair from the Heart, where a bunch of bloggers get together and are secretly assigned somebody else's blog. Then you cook or bake from your assigned blog and we all share on the same day.

It's so much fun seeing what somebody else chose to make from my recipe collection and to get to know another blogger better by digging through her treasure trove of favorite recipes to pick just the right one to recreate for House of Nash Eats readers. Go check out all of my past Freaky Friday recipes after you print off this apple pie ice cream recipe!

This round I was assigned LeMoine Family Kitchen which is run by Angela. While we haven't had the chance to meet in person at a blogging conference yet, I already feel a connection to Angela because she is from New Jersey, which is where I lived for almost two years in my early 20's. She has an amazing site with

It made it so hard to choose a recipe from her site because I was sorely tempted by her baked ziti and Italian zeppoli (two of my favorite foods that I had never had before moving to New Jersey!). But then I found her apple cinnamon ice cream and knew it would be perfect for National Ice Cream Month!

This ice cream flavor is seriously fantastic with plenty of real apple pieces and cinnamon flavor. Although Angela didn't call for it in her original version, I added broken up cinnamon graham crackers for a cheater "pie crust" effect. But you could also use the crumble part of my rhubarb crumble ice cream instead.

The ice cream base is no cook (well, except for the apple compote part), so there is no worrying about tempering egg yolks for your ice cream here. That makes it a little less creamy when scooped, but it's still got a pretty wonderful mouthfeel and saves you the extra effort.

It's a truly delicious ice cream, especially for anyone who loves apple pie already. And if you want to take things to the next level, drizzle it with some caramel sauce or pair it with some blondies, oatmeal cookies, or a scoop of toasted almond ice cream. I don't know about you, but I ALWAYS split my scoop when given the chance. 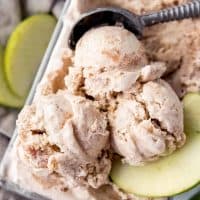 Take a look at all of our 2021 Freaky Friday Summer Edition Recipes: