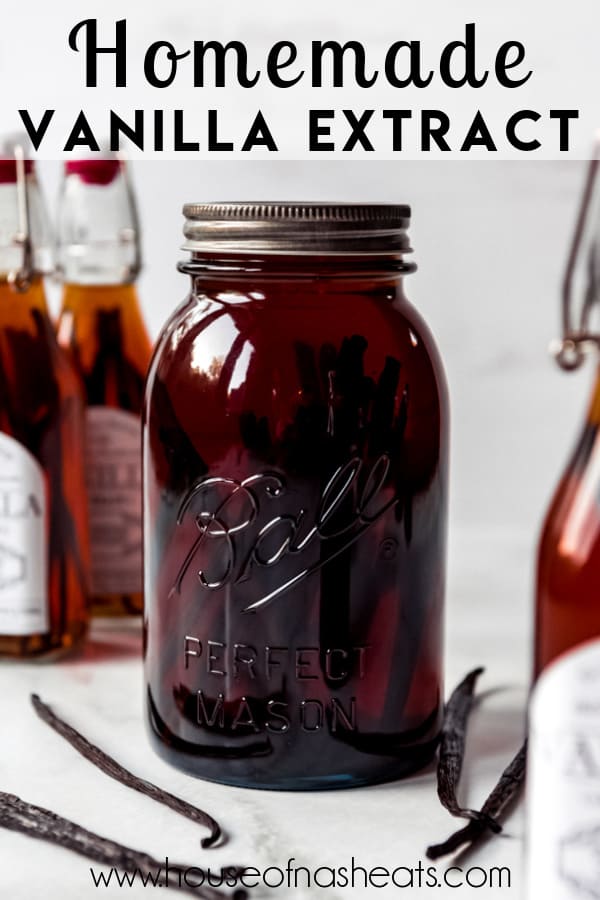 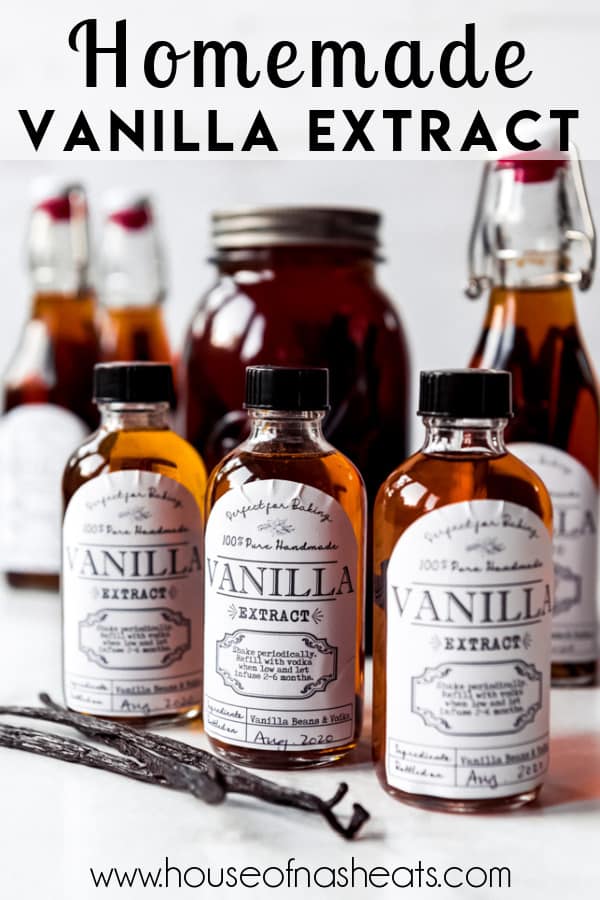 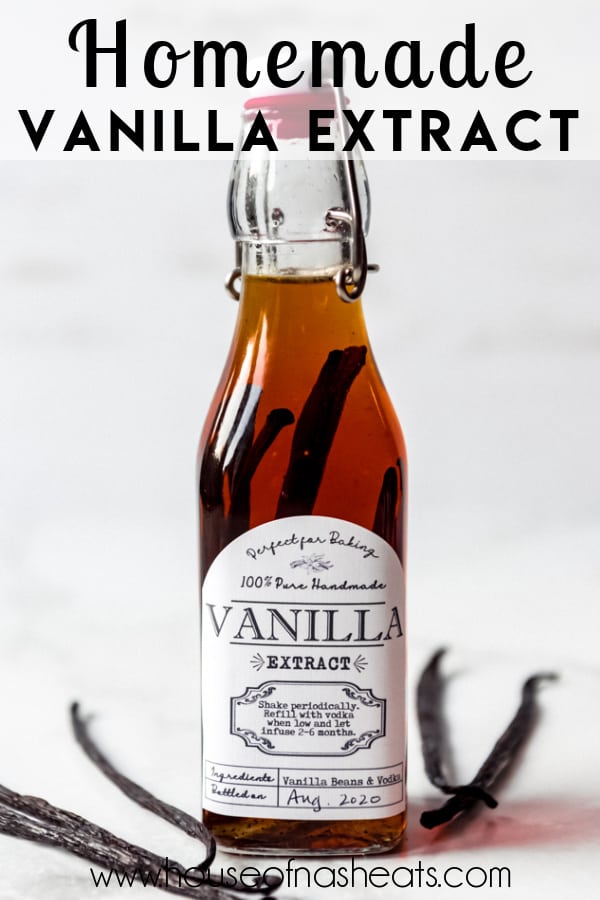 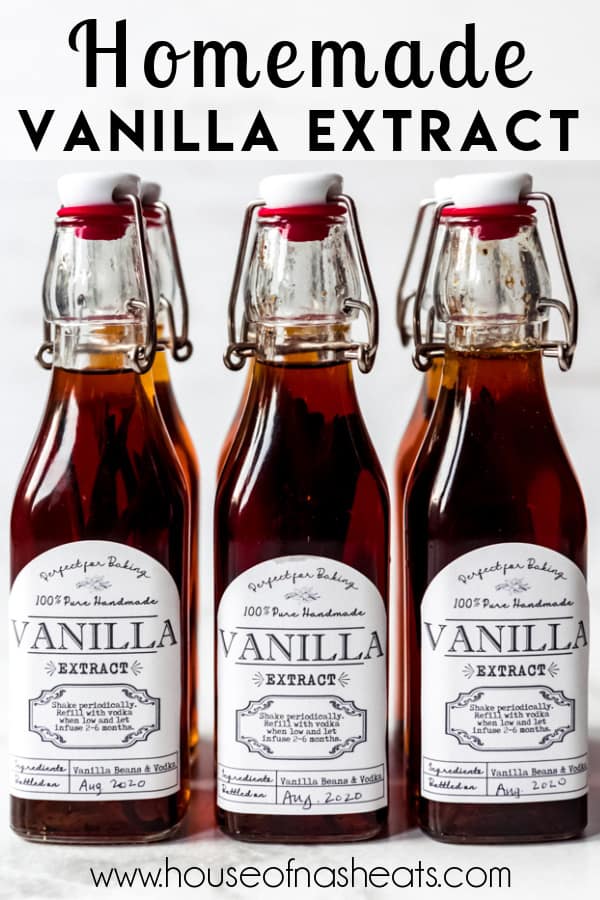 Good vanilla extract is a common ingredient in almost ALL of my favorite baking recipes. Not only is it more cost-effective to make Homemade Vanilla Extract, but it is even better quality than most of what you will find at the store! Made with just TWO ingredients, this makes a fantastic gift to share with friends and neighbors that only gets better with time!

We love to give edible gifts at Christmas time and this vanilla extract is one of my favorite ideas. Some other great homemade Christmas gift ideas are bottles of salad dressing, spice mixes, or a batch of your favorite homemade candy!

You are going to LOVE this homemade vanilla extract! Not only is this a fun, easy project, but the resulting vanilla has a robust flavor and aroma that most store-bought extracts and imitation vanilla just can't achieve.

It might seem unnecessary to make vanilla extract when it's so easy to pick it up at the store, but there are a few good reasons for making your own vanilla extract at home. Cost and quality are at the top of that list!

A few years ago, I noticed a significant price jump in the cost of the bottles of vanilla I had always purchased from Costco. It was like a $20 increase per jar! Being a baker, I go through a bottle of vanilla quite quickly and every teaspoon of the stuff adds up fast at that price point!

Also, really good vanilla is noticeably superior to store-bought both in flavor and aroma. You can tell the difference immediately just by opening a jar of each side-by-side and sniffing each in turn.

There is "single-fold vanilla" (most of what is available from the store) and "double-fold vanilla" (which many professional bakers use) where up to twice the amount of vanilla beans are used to really boost that vanilla flavor.

Is it worth it? Absolutely.

To be honest, I had my doubts about all this until I actually tried making homemade vanilla extract myself. After a couple of months of letting the vanilla beans soak in the vodka, I did the side-by-side test against a bottle of store-bought vanilla that I have always thought was pretty decent quality.

The difference between the two was stark. Even blindfolded I could tell right away which was homemade as it has a sweeter, more powerful fragrance than the weaker, store-bought kind. Homemade just smells more...vanilla-y.

And we all know that better quality ingredients can make a big difference in recipes! Baked goods made with homemade vanilla extract definitely taste superior to recipes made with the weaker store-bought stuff.

Use your homemade vanilla extract in any baking recipe. Although my vanilla buttercream frosting, vanilla cupcakes, and vanilla pastry cream are all excellent options for desserts that really let the pure vanilla taste shine.

To make homemade vanilla extract, you only need a couple of things:

Nielsen-Massey has a thorough explanation of different flavors of vanilla. Although I'll be honest that most of the differences described in terms of fruity, floral, and smokey are way over my head.

The vanilla beans I ordered online came vacuum-sealed and I was pleasantly surprised at how moist & plump the beans were.

Easily the most popular choice for making homemade vanilla extract is vodka for its neutral flavor. But bourbon, brandy, or rum are also good choices.

There is no need to splurge on when it comes to the vodka you are using. Less expensive options will work just great since all the flavor in your vanilla extract comes from the vanilla beans. Our local Costco sells giant bottles of vodka and that's what I used to make a whole lotta vanilla extract that I'm planning to give away as Christmas gifts, in addition to keeping a good supply for myself.

I like to do some of each size and use my larger quart-size jar to refill smaller, easier to use bottles. Then I just top up my quart-size jar with vodka and let it continue to brew until I need to refill my smaller bottle again.

Generally speaking, the beans can be used twice, so by the fourth time I refill my larger quart jar (assuming I replace 1 cup of vanilla extract with vodka each time), it will be time to replace the vanilla beans with new ones.

It takes at least 8 weeks for the vanilla beans to infuse the vodka for full-strength vanilla. If you are planning to make homemade vanilla to give as gifts and have less than 8 weeks, just let your recipient know when it will be ready to go!

But the vanilla extract gets even better if you wait 6 or even 12 months (or longer!). The longer the vanilla sits, the darker it will get and the more powerful the vanilla flavor will become.

Make a bunch of this vanilla extract now and share it with friends and neighbors during the holidays, or hold onto it and let it really develop for a full year and give it out next holiday season!

I asked my super talented and crafty friend, Jana, to design some apothecary-style labels for my jars this year. They turned out so fantastic that we decided to share them with you!

The labels are perfectly sized for these printable stickers. All you have to do is print them off and stick them on the bottles! When printing, be sure to set your printer to 100% and not "fit to page". 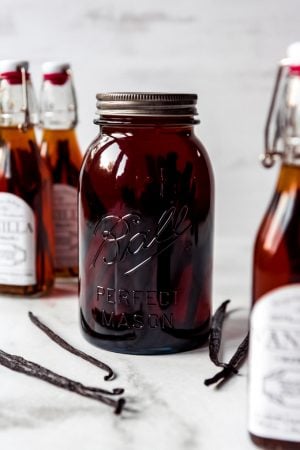 5 from 2 votes
Amy Nash
Prep Time 5 mins
Total Time 5 mins
Course Marinades & Rubs
Cuisine American
Servings 8 ounces
This recipe is written for 1 bottle of vanilla, but we recommend quadrupling or octupling the batch since it lasts forever, you can give it away as gifts, and it only gets better with time. 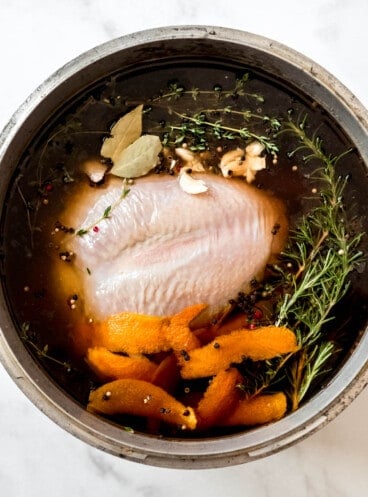 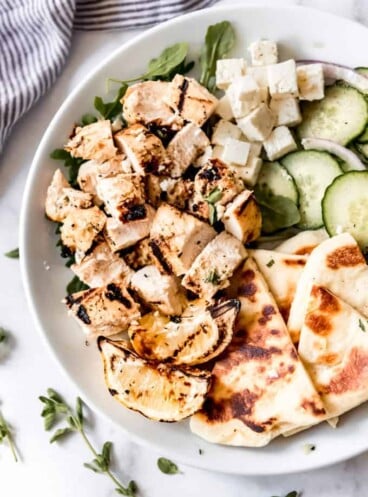 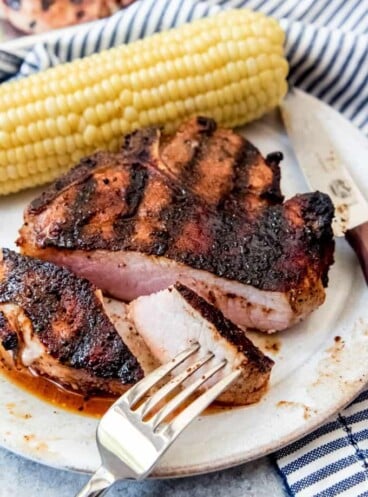 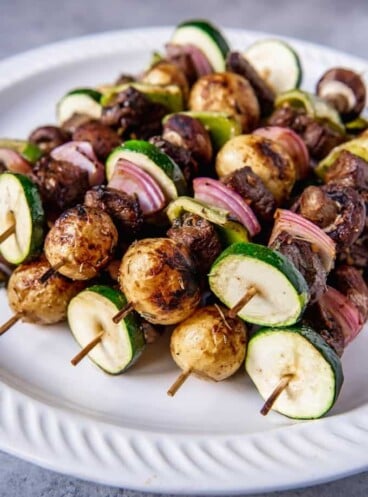