This creamy Irish Leek and Potato Soup is a deliciously savory and satisfying light dinner that is perfect served with lots of crispy, crumbled bacon bits on top and a loaf of Irish soda bread with plenty of butter.

If you're looking for some other delicious Irish dishes (say that three times fast!), be sure to try our Bangers and Mash, Corned Beef and Cabbage, Dublin Coddle, Sticky Toffee Pudding, or Shepherd's Pie!

Leeks and potatoes are both classic ingredients in Irish cooking. They grow well in Irish soil, and were staple crops for many Irish families who could grow both in their gardens. While we may not be as familiar with leeks these days, their mildly-oniony flavor is wonderful, especially once they are sliced and sauteed in a little butter to make them tender and delicious.

Despite their subtle flavor, leeks combine with potatoes to make this wonderful soup that our family enjoys during the cold winter months, which is perfect since leeks are in season from October through May.

Leeks are in the same family as onions, shallots, scallions, and garlic, which you might guess by the shape and color of a leek, since leeks look a lot like a giant green onion. But they tend to be quite a bit milder than the other allium vegetables, and while still tasting similar to onions, they don't have the same pungent aroma and powerful bite that most onions have. The white and light green parts of the leek can be eaten raw and are crunchy and firm. But the dark green leaves are too tough to be eaten raw and I've never cooked with them, although you can throw them into a stockpot to help flavor a homemade broth.

How to Prepare Leeks for Soup

Since leeks grow up through sandy soil and have many layers, the leek leaves can be full of grit and dirt. Which makes cleaning them super important if you don’t relish the idea of eating gritty soup.

To prepare leeks for soup, use a sharp knife to cut off the tougher, dark green leaves and the root end of the leek. I then find it easiest to slice the leek in half lengthwise and proceed to chop it much like I would chop an onion.

Transfer the chopped leeks to a bowl of cold water and swirl them around to remove the dirt and grit. Scoop the rinsed leeks out with a slotted spoon and drain completely before using in the soup.

Don't just pour the rinsed leeks into a colander with the water, since the dirt settles at the bottom of the bowl and you don't want to pour that over the now clean leeks.

How to Make Leek and Potato Soup

To make Irish leek and potato soup, I like to first start by browning chopped bacon in the bottom of a dutch oven. You could skip this step and make a vegetarian version of this soup by using vegetable stock in place of chicken broth, but I love the richness and flavor that the bacon gives and it makes a great garnish that turns this soup into more of a meal for me.

Once the bacon is browned, remove it with a slotted spoon and drain the bacon grease. I like to add butter to the pan to saute the onion and leeks in, although you could use some of the bacon grease instead, if you prefer.

Once the onions and leeks start to soften, add the garlic for just a minute, then in go the potatoes, broth, and all other remaining ingredients except for the cream, which you will reserve for the end.

It only takes 15-20 minutes of the soup to simmer enough for the potatoes to soften, then I like to blend about ⅔ of the soup until creamy and add it back to the remaining ⅓ of the soup so that there are still some bite-size chunks of potato and bits of leek in the soup.

Just be careful about not overblending the potatoes because they can develop a thick, unpleasant gluey texture if processed too much.

At this point, a little heavy cream adds just the right amount of extra richness and creaminess to this wonderful soup, which you can garnish with the crispy bacon and maybe some extra thyme.

Every time I make this leek and potato soup, my whole family raves about it and asks for second and third helpings. And in the spirit of the Irish and my Irish heritage, here are the lyrics to an Irish blessing song that I learned in high school show choir (yes, I did show choir and was even in the Nebraska All-State Choir my senior year) that we performed a cappella at the close of every concert.

To this day, I still have the alto part memorized and sing it to my girls as a bedtime song from time to time. It has always spoken to me.

May the road rise up to meet you, May the wind be always at your back, May the sun shine warm upon your face; The rains fall soft upon your fields. And until we meet again, May the God that loves us all, Hold you in the palm of his hand. 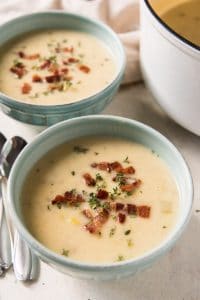 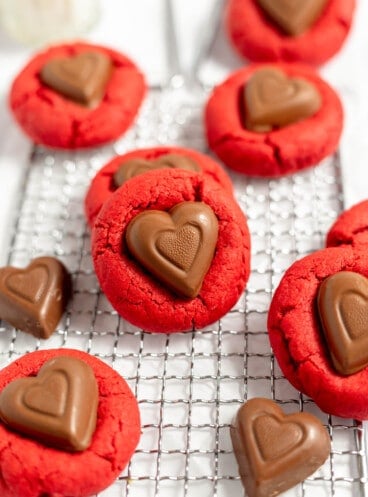 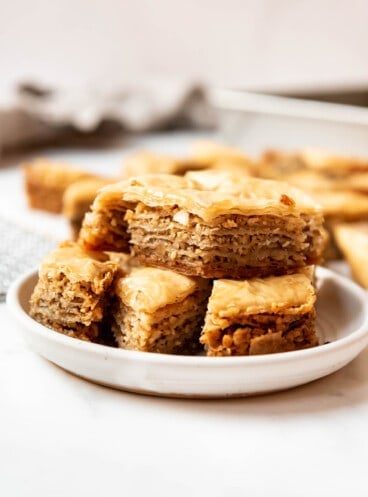 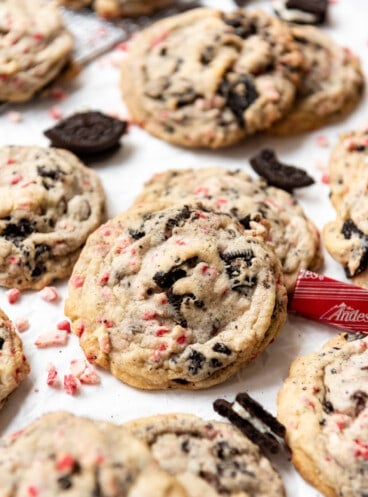