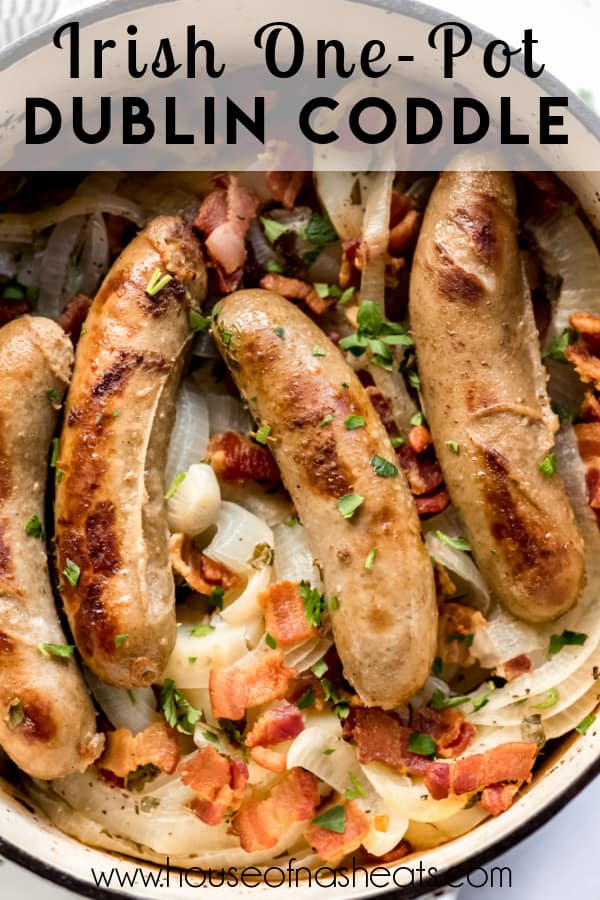 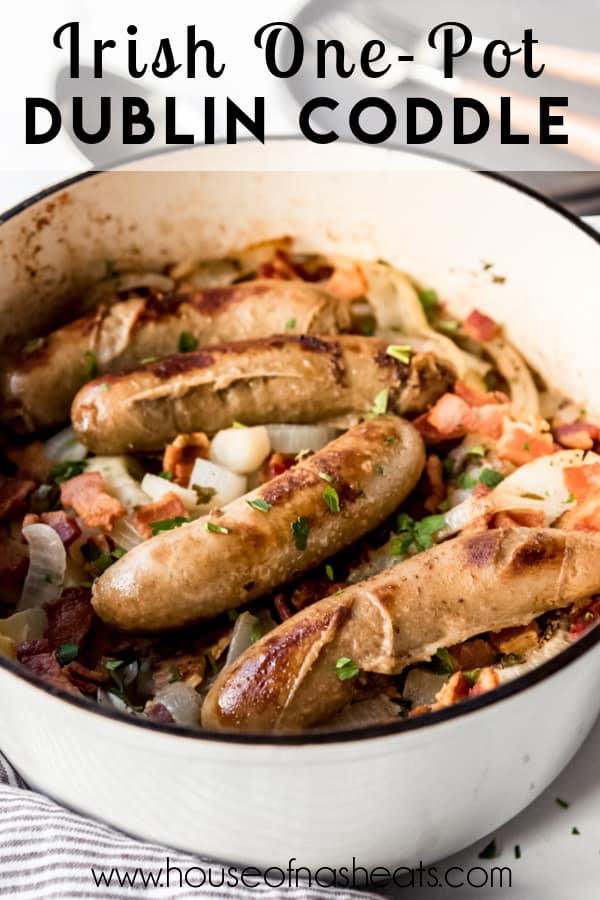 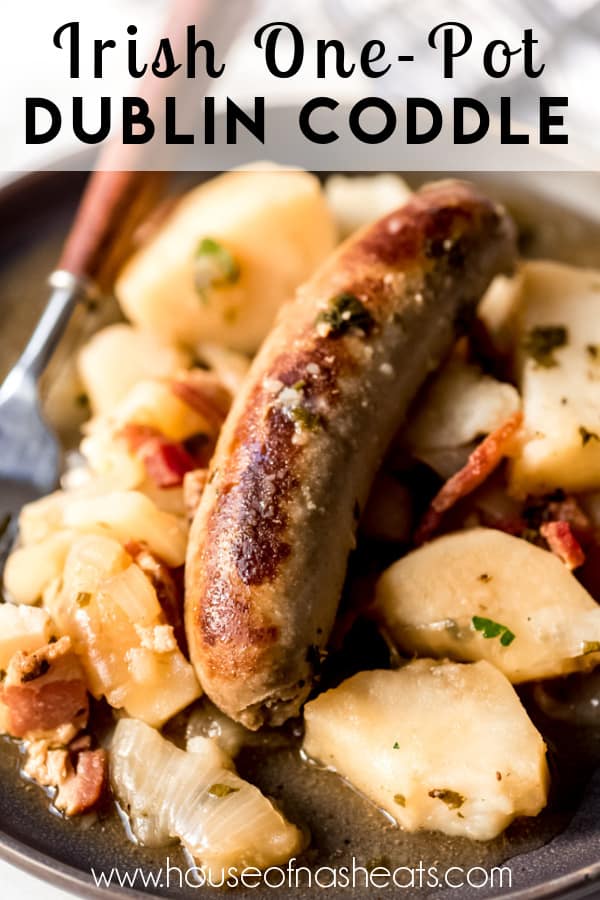 Dublin Coddle is a classic savory Irish one-pot meal of tender potatoes, sausage and onions. Everything is cooked slowly in beef broth to create a rich, filling stew that makes great weeknight fare and is perfect for St. Patrick's Day!

We really enjoy authentic Irish meals, which typically use simple ingredients to create something flavorful and delicious! If you are also a fan of Irish food, you may like our Bangers and Mash or Shepherd's Pie next!

I didn't realize that I had so much Irish ancestry until I took a DNA test a few years back and learned that it's one of my top results. All four of us took DNA tests at the same time and it was eye-opening to learn each of our backgrounds. We wanted to have a better idea of our daughters' genetic makeup since both were adopted at birth, but it was just as fascinating discovering more about my own heritage.

Saint Patrick's Day has become a bigger holiday for us since moving to Dublin (California, not Ireland) where there is a St. Patrick's Day festival and parade and everybody gets school and work off and goes to the big city festival. Our town is way into its Irish heritage and there are shamrocks on all our town signs and everything.

In our first year of marriage, I thought it would be fun to have corned beef and cabbage for St. Patrick's Day dinner, which I now know is more Irish-American than actual Irish anyway.

But I screwed it up so badly that we ended up scrapping the whole thing and walking to our favorite Indian restaurant and having chicken tikka masala instead. Thankfully, I have since learned how to make fantastic corned beef and cabbage, which I highly recommend! At least I've learned from my failures.

The good thing is that I discovered this Dublin Coddle recipe and found it much easier to not mess up and even more traditional that corned beef and cabbage anyway.

I haven't yet had the opportunity to visit the Emerald Isle, but it's high on my list of places to go when we get the chance! For now, I love traveling vicariously by exploring some more traditional Irish foods and sharing them here!

If you are looking for a delicious dessert to serve with your Dublin coddle, I recommend Sticky Toffee Pudding which, while known for being British, is also served for dessert in Ireland.

The list of ingredients is short and simple! This dish is made from humble ingredients that many poor Irish would have had access to like potatoes, onions, and sausages.

How to Make Dublin Coddle

What to serve with Dublin Coddle

This is really a one-pot dish that has everything you need for a balanced meal. But you can't go amiss serving it with a loaf of fresh Irish soda bread! A green salad would also be delicious.

While researching Dublin Coddle I found a number of interesting stories or legends about it that I found fascinating. Whether these are true or not, I really can't say.

One idea is that it was made by Irish women on nights when their husbands would visit the pubs. Since dublin coddle can be left simmering on the stove, the men would have something decent to eat when they got home and the women could go to bed.

Another theory is that this is a dish you only find in Dublin, Ireland and not throughout the rest of the country. This is because unlike it's counterpart, Irish Stew, which uses mutton, Dublin Coddle uses sausages (bangers) which were more readily available and more affordable in the city than mutton, which was found more in the rural parts of the country.

Ladle portions of the coddle into bowls and serve with crusty bread for sopping up the rich sauce! Don't wait for St. Patrick's Day to roll around to try out this wonderful Irish dish! 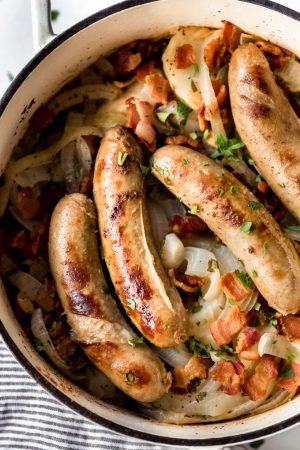 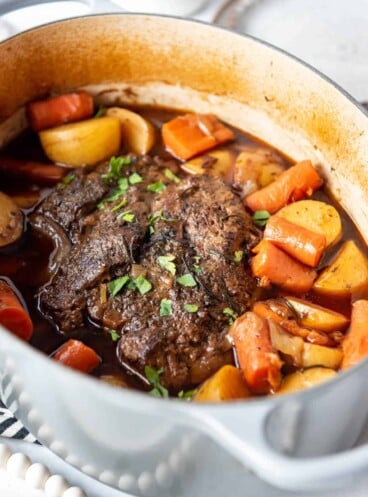 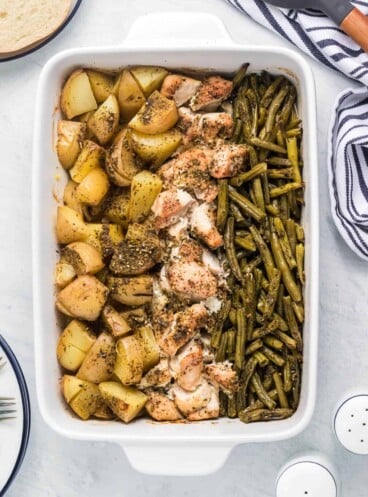