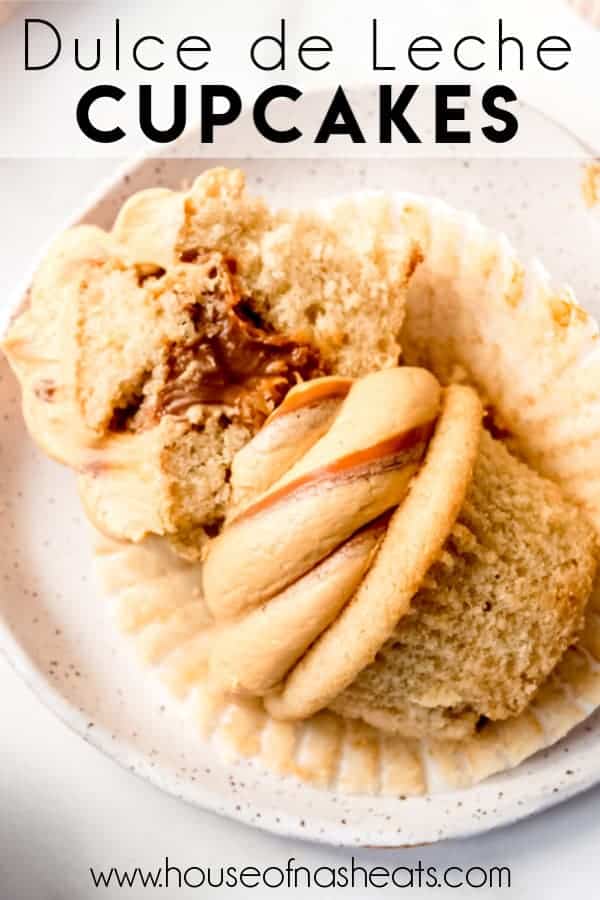 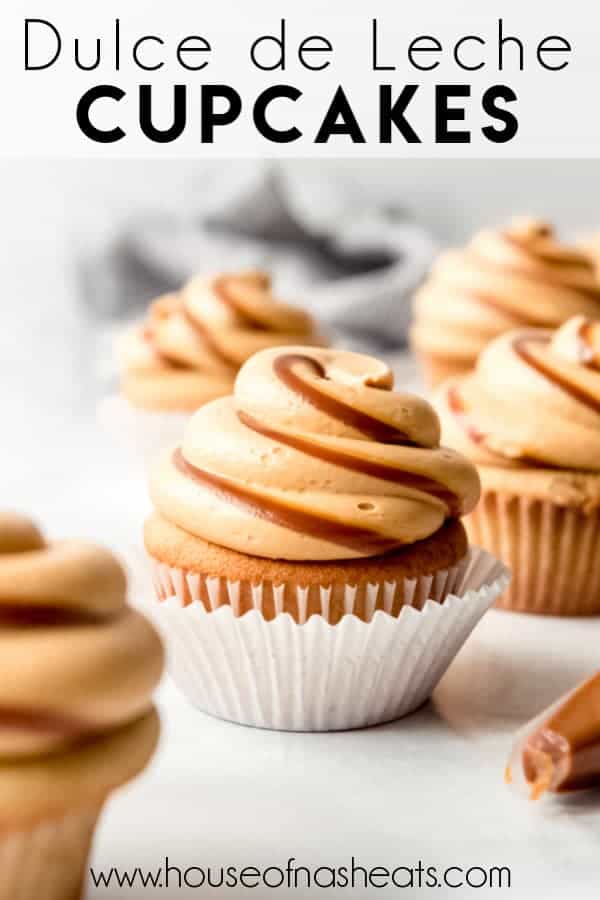 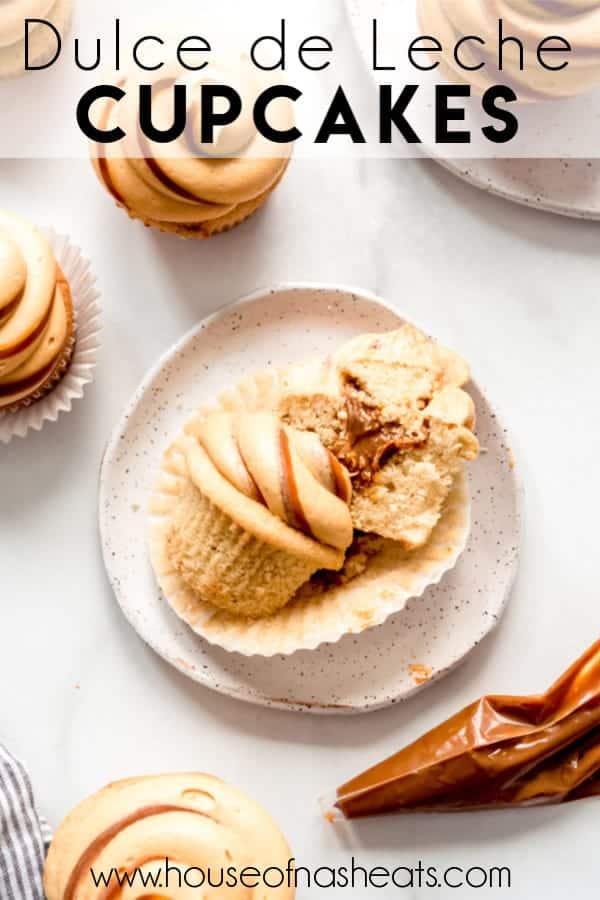 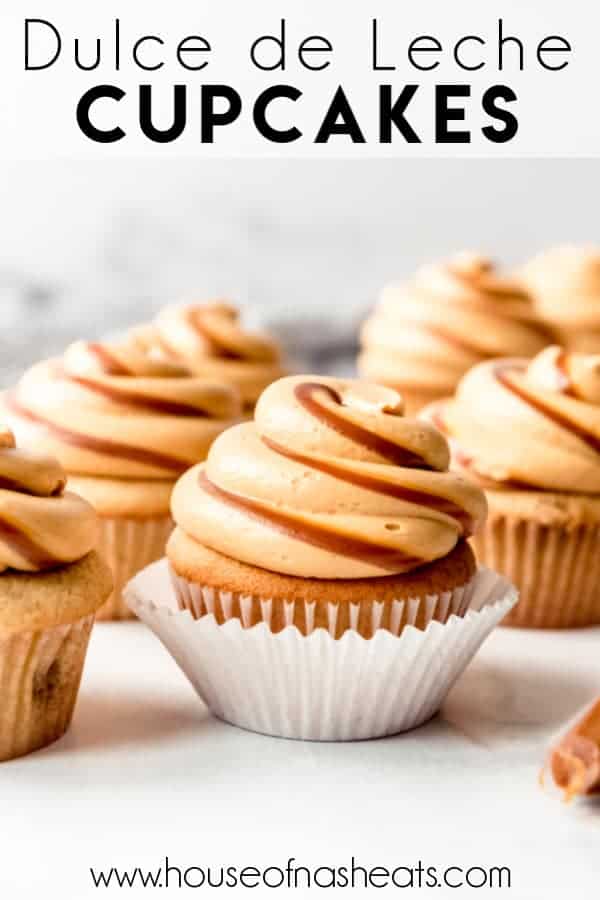 These Dulce de Leche Cupcakes have a sweet milk caramel filling and dulce de leche frosting piped on top of a rich brown sugar cupcake. They are incredibly moist and tender, with loads of dulce de leche flavor in every bite!

We are all fans of any kind of caramel dessert at our house, so it's no surprise that dulce de leche treats are always winners over here. I've made it before by boiling cans of sweetened condensed milk until it turns into caramel, but you can actually just buy cans of dulce de leche at the store and save yourself the trouble.

I'm absolutely in love with how the swirled dulce de leche frosting came out on these cupcakes! It's such an easy trick to get a swirl in frosting like this, but it gives them a mesmerizing appearance that is difficult to resist.

Is there a difference between caramel and dulce de leche?

Dulce de leche is very similar to caramel, but it has a distinct taste from, say, cream caramels. That's because dulce de leche is made with cow milk and sugar that is cooked long and slow until it caramelizes, where typical caramel gets it's flavor from the sugar melting and caramelizing. Dulce de leche is more mellow and creamier than caramel, with a wonderful richness and smooth mouthfeel to it.

Because of it's wonderful thick texture, it makes a great filling for the center of these cupcakes. You could skip filling them and just do the brown sugar cupcake base with the dulce de leche frosting, but then the caramel flavor will be less pronounced.

To make these dulce de leche cupcakes, start out with the cupcake base itself. It's a simple process of creaming butter and sugars together in a large bowl, then adding the eggs and vanilla and mixing again. Creaming just means beating the ingredients together at medium-high speed for a few minutes until the mixture is combined really well and lightens up a bit as air is added to it.

After that, add the dry ingredients, followed by some sour cream and milk, which helps keep the cupcake base extra tender and moist. Then divide the batter between cupcake liners and bake at 350 degrees F for 20-22 minutes until done.

When the cupcakes are cool, cut out a plug from the center of each cupcake. You can just use a small, sharp knife, like a paring knife, to do this, or actually buy a little coring tool to help if you like.

How to pipe frosting with a swirl of dulce de leche

This technique is so fun and makes for a really dramatic finish to the cupcakes. Start by laying out a piece of plastic wrap on your counter, then spoon or pipe a line of dulce de leche on one side. It doesn't need to be perfect. Pile the dulce de leche frosting next to it, then fold the plastic wrap over the frosting to create a tube of frosting, twisting the ends to hold in the frosting.

Slide this tube of frosting down into a piping bag fitted with a large, round tip. Pull the end of the plastic wrap through the tip and snip it off so the frosting can pipe out. Then pipe thick swirls of frosting onto each cupcake.

It sometimes takes a bit for the line of dulce de leche to appear, so you might want to just pipe frosting onto a plate until it does, or just know that the first cupcake or two might not have the same dramatic swirl as the rest of them.

The FULL RECIPE is on my partner Imperial Sugar’s site, so click through to make these scrumptious cupcakes! Each month we collaborate to bring a great recipe to you using their wonderful products, and you can see all of them over on their site!

How to store cupcakes

The finished cupcakes can be stored on the counter at room temperature inside an airtight container for up to 3 days, or in the fridge for up to 5 days.

If you need to make these in advance, the cupcakes freeze well before filling and frosting. Just keep them in an airtight, freezer-safe bag in the freezer and thaw before using.

The dulce de leche buttercream frosting can also be made in advance and kept in the fridge for up to 1 week or frozen for up to 3 months. Just thaw completely and let the frosting sit out at room temperature for a couple hours before using. I like to beat it again in my stand mixer so it's nice and smooth and pipeable.