Korean Beef Tacos made with tender bulgogi beef is a fantastic mash-up of Korean, American, and Mexican cuisine all in one delicious, flavor-packed fusion dish that is sure to change up your Taco Tuesday tradition!

In these Korean beef tacos, Korean-style bulgogi beef and kimchi lend some cultural legitimacy, while soft flour tortillas, avocado, cilantro and lime are practically shouting Mexican street tacos. And the whole thing is tied together by their connection to the American food truck scene where Korean beef tacos are hugely popular! I'll admit that of all the Korean-inspired recipes I've shared this week in the lead-up to the winter games, this one is probably the biggest stretch for being "Korean".

While I'm not claiming any authenticity with this recipe, I did research traditional flavors for making the bulgogi beef (including using an Asian pear in the marinade to help tenderize the meat) and did my best to accurately represent the flavors that should be present in the meat component of this Asian-fusion meal.

I think adding some kimchi as a topping along with shredded purple cabbage lands even more of a traditional Korean flavor punch, but if kimchi isn't your thing, just leave it off. Though if you haven't tried it yet, I think it is actually quite delicious!

How to Make Korean Beef Tacos

Making these tacos is actually super easy and straight forward. A quick marinade is made by blending some onion, garlic, pear, brown sugar, soy sauce and sesame oil together, then tossing in some thinly sliced ribeye or sirloin steak.

After it has marinated for 30 minutes, it all goes into a large pan and gets cooked through so that the sweet and savory sauce coats each bite of the meat.

Once the bulgogi taco meat (that sounds weird, but it is what it is) is done, you just load up tortillas with meat, kimchi, shredded purple cabbage, avocado slices, cilantro and drizzle it with a super easy taco sauce. Yum! 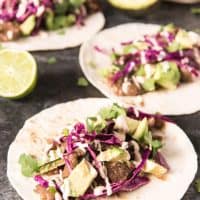