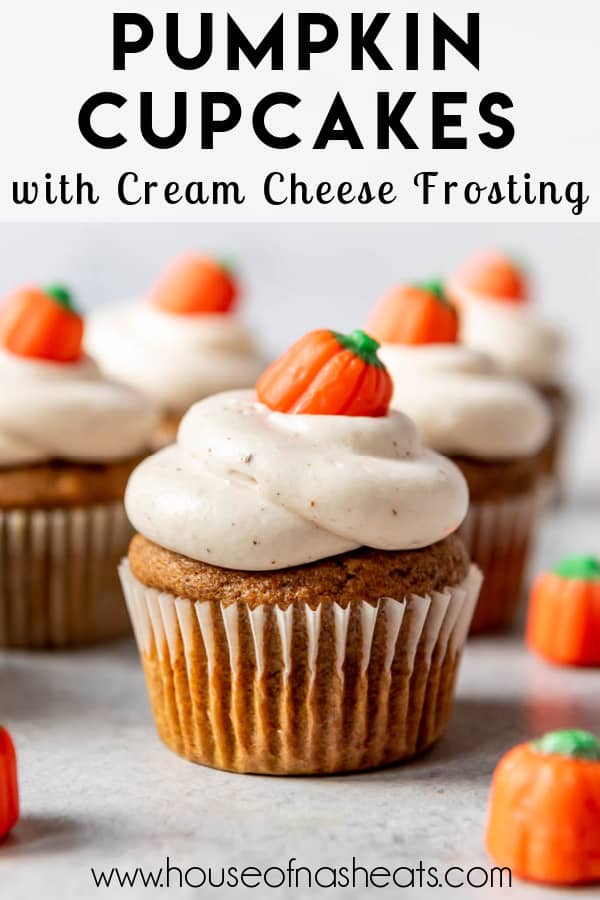 Lovely & moist Pumpkin Cupcakes with a cinnamon cream cheese frosting are the perfect Fall treat! They are quick and easy dessert to share with friends and family for any of the Fall holidays or just because it's pumpkin season!

When you start feeling that nip in the air and the leaves begin changing color, it's time for all things pumpkin! Some of our other favorite pumpkin recipes are a classic Pumpkin Roll, Pumpkin Ice Cream, and a yummy Pumpkin Pie Smoothie that's great for when you have a partial can of pumpkin puree leftover!

How can you resist a cute little handheld treat topped with one of those adorable candy pumpkins? You don't need any fancy decorating skills if you just make smart choices about how to accessorize a cupcake.

How to Make Moist Pumpkin Cupcakes

Do these cupcakes need to be refrigerated?

Because they are made with a cream cheese frosting, yes, you should store these cupcakes in the refrigerator. They will last for about 4-5 days in the fridge.

Can I make this into a layer cake?

The recipe will need to be doubled to make a 2 layer cake, but could then be baked in two 8-inch or 9-inch pans to make a layer cake.

Can these cupcakes be frozen?

You can freeze the bottom cake part of the cupcakes, but I don't recommend freezing cream cheese frosting. The cake part will last for at least 2-3 months in the frozen though.

Can I make mini cupcakes with this recipe?

Sure! Just fill them about ¾ full and bake for 11-14 minutes until they are done. Everybody loves little bite-size cupcakes!

If you want to change things up, these pumpkin cupcakes would be delicious with chocolate frosting, the graham cracker frosting from my s'mores cupcakes, or eggnog frosting. Or make it Halloween themed with a black and orange version of this homemade rainbow chip frosting.

Another idea would be to add mini chocolate chips or chopped walnuts or pecans to the batter or the frosting. Or drizzle the cupcakes with caramel! 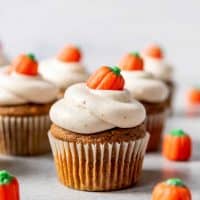 Unfrosted cupcaked can be frozen for up to 2 months. Thaw before frosting and serving.