This Slow Cooker Creamed Corn recipe is an easy, classic side dish for your holiday table, made even more special with a savory sprinkle of crispy bacon and chopped chives to complement the natural sweetness of the creamy corn.

Looking for more holiday side dishes? Be sure to also try our super popular Fresh Green Bean Casserole, Sweet Potato Casserole with Marshmallows and Pecans, and Easy Southern Cornbread Dressing!

My family loves corn, especially in the summer when we can get it fresh from the farmer's market.

The girls enjoy helping to shuck it for grilled Mexican street corn, or sometimes we just keep it classic and slather the grilled or boiled corn on the cob with butter, salt and pepper.

But once the summer corn season is over, we can still enjoy one of our favorite starchy sides with this delicious slow cooker cream style corn recipe. There is a whole debate about whether corn is a vegetable or a grain, but really for nutrition purposes, corn should be considered a grain on your plate.

Creamed corn makes an appearance on many Thanksgiving tables around the country, even though it's nothing like what the original pilgrims would have eaten since they didn't have access to cream or sugar. And maize was no longer in season so the corn present at the first Thanksgiving was most likely served in bread (cornbread anyone?) or porridge form.

I think that making slow cooker creamed corn from scratch is worth the extra five minutes of effort than just opening a can of creamed corn because it is so much better and you can control how creamy you like it.

You actually get more of both the cream and corn flavors, rather than an unbalanced sweetness that comes from the stuff in a can. And it's a set-it and forget-it crock pot creamed corn recipe it doesn't take up precious oven space while you are preparing the rest of the meal.

This recipe makes a big batch already, but if you want extra for leftovers or to have creamed corn to add to cornbread, you can easily double the recipe.

I like the extra texture and salty addition of crumbled bacon bits on top of the creamed corn. I usually just make extra bacon using my oven baked bacon for a crowd recipe a couple days in advance and then chop it up rather than taking the time to dirty another pan and cook bacon up special for this. Anything to save time and effort on Thanksgiving Day!

How to Make Creamed Corn

This recipe could hardly be simpler. Just dump frozen corn kernels (no need to thaw!) into your slow cooker, then pour in some milk, sugar, salt and pepper and give it a stir. Then top with cubed cream cheese and butter and let it cook for 2-3 hours on HIGH or 4-5 hours on LOW.

At that point, you just stir the corn vigorously to get it to come together to create a silky, creamy sauce.

Some of the corn will break down, but if you want an even creamier creamed corn, use an immersion blender or transfer part of the cooked corn mixture to a food processor (affiliate link) and pulse a few times before adding it back to the slow cooker and stirring everything together.

More Side Dishes to Complete Your Thanksgiving Meal 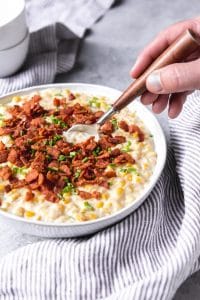 4.8 from 5 votes
Amy Nash
Prep Time 10 mins
Cook Time 3 hrs
Total Time 3 hrs 10 mins
Course Side Dish
Cuisine American
Servings 8 servings
This Slow Cooker Creamed Corn recipe is an easy, classic side dish for your holiday table, made even more special with a savory sprinkle of crispy bacon and chopped chives to complement the natural sweetness of the creamy corn. 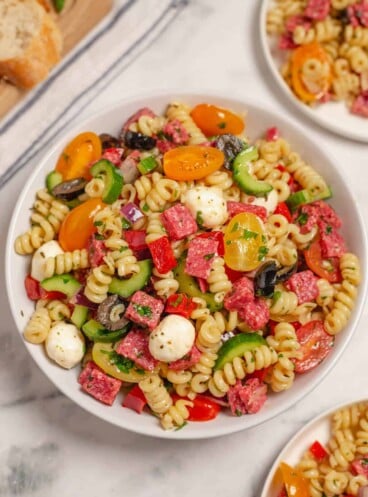 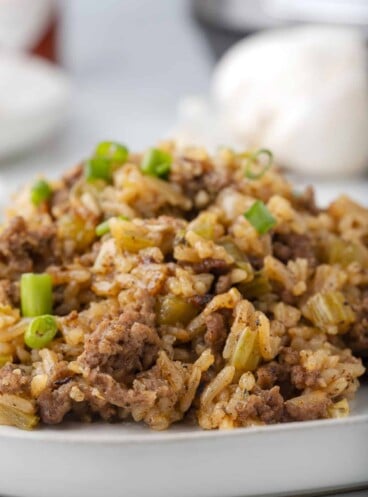