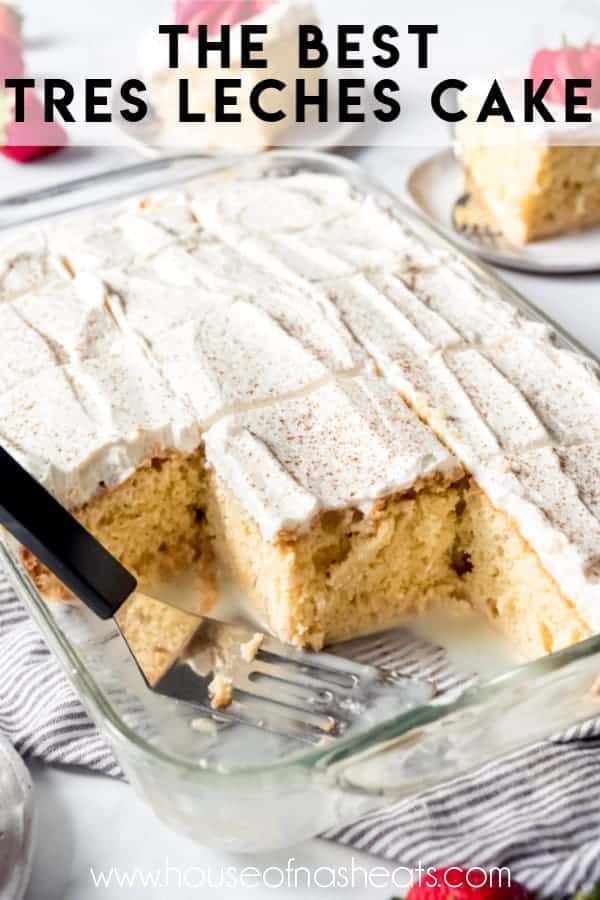 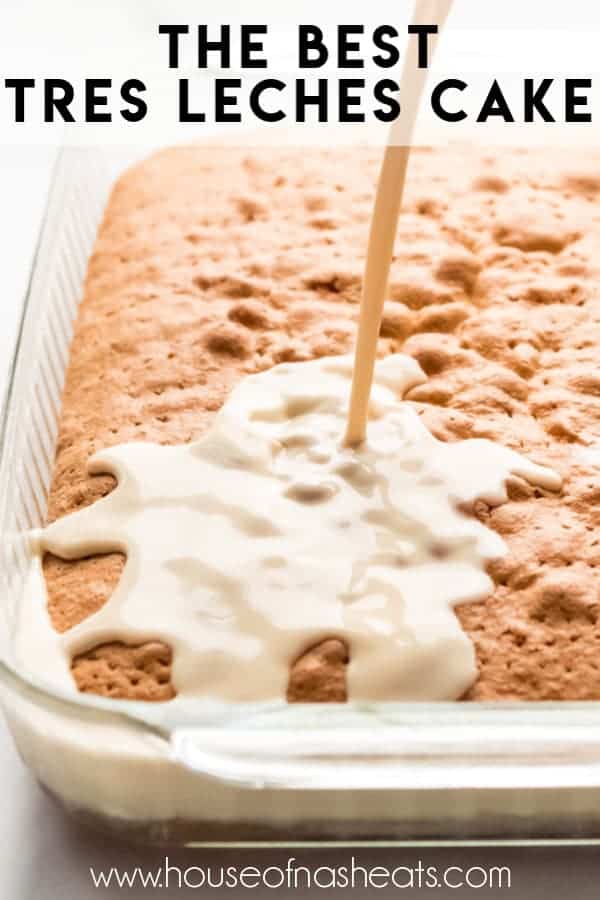 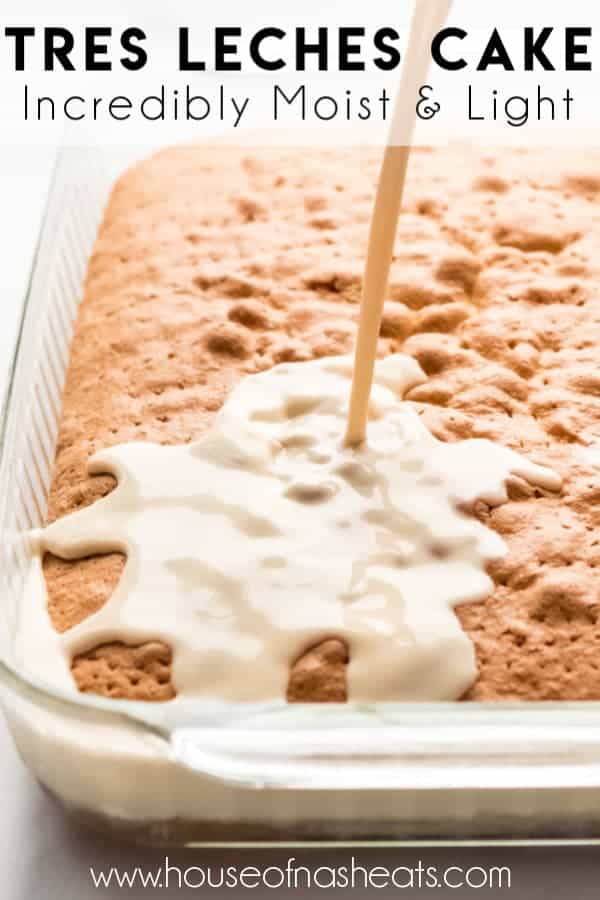 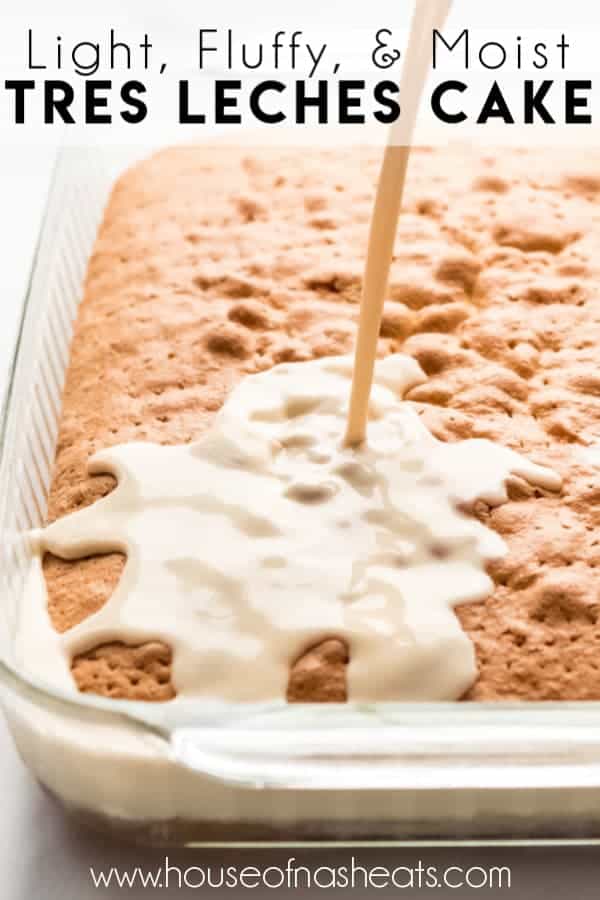 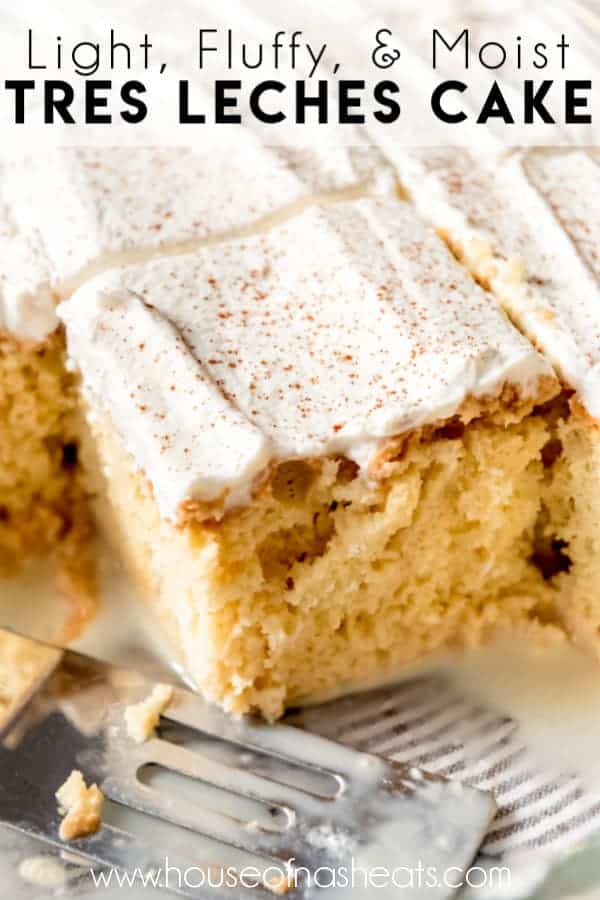 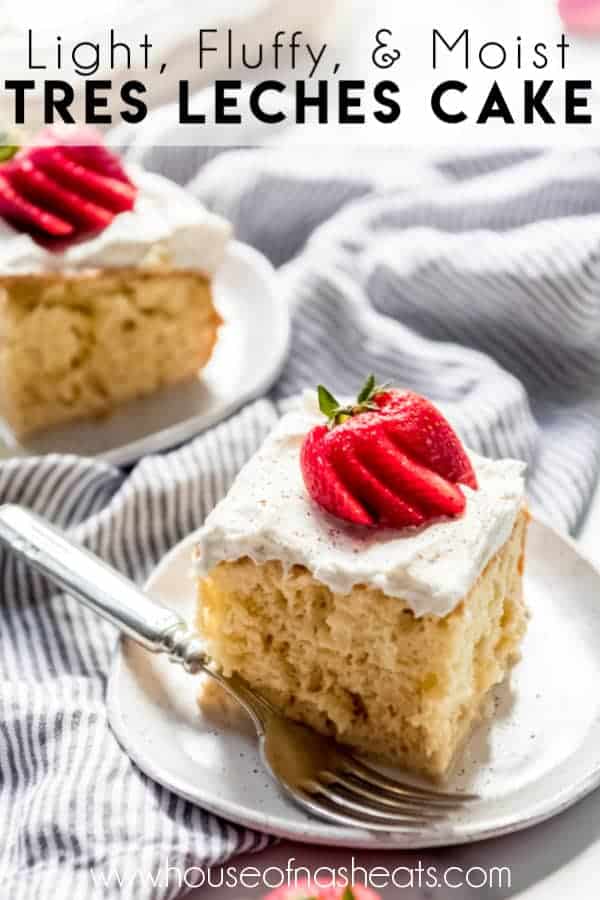 Soft and moist, with a trio of sweet milks poured over the top to soak into the light and fluffy sponge cake below, this Tres Leches Cake recipe is an authentic Mexican dessert that is the perfect finish to any meal! Finished with sweetened whipped cream, a sprinkle of cinnamon, and strawberries, everybody loves this fun, easy cake!

Planning a Mexican feast? We've got you covered for dessert, but try our Authentic Carne Asada, Easy Homemade Flour Tortillas, the BEST Guacamole Recipe Ever, and finish things off with some Horchata (a Mexican cinnamon rice drink that is just delicious!

If you have ever been to a Mexican restaurant and looked at their dessert menu, you have probably seen tres leches cake on there. But I'm always too stuffed to order it! And it's better made at home anyway. It's popular not only in Mexico, but other parts of Latin America as well.

If you have tried it, then you know how amazing this simple, unassuming dessert is. If you haven't tried it yet, well let me tell you, you are in for a treat! It's like the original poke cake, which are always popular in the summer because they can be served cold.

This really is the best tres leches cake recipe that is an authentic version of the classic Mexican dessert. It's made from scratch instead of using a box cake mix and it's absolutely delicious!

Tres leches means "three milks", and it gets its name from the combination of three types of milk: evaporated milk, sweetened condensed milk, and whole milk (or even heavy cream). They are combined and poured over the cake after it is baked, and the spongy cake soaks up every drop of delicious liquid making it the moistest, yummiest cake you can imagine.

Picture a light, fluffy, airy white cake, baked in a 9x13-inch pan and made super extra moist by piercing the cake all over to create holes into which you pour a mix of three different types of sweet, creamy milk. The sponge cake is aptly named because it soaks up all that milky goodness but somehow manages not to taste squishy or soggy because of it.

Then the cake is chilled and topped with a layer of sweetened whipped cream, lightly dusted with cinnamon, and adorned with a sliced strawberry or a maraschino cherry. It's so good and such a great way to end a meal on a hot day!

You might notice that there is no butter in this cake. That's an intentional omission as this cake really doesn't need it, and it actually helps the cake soak up the milk mixture better without it.

How to make tres leches cake

This is a great recipe that you can make a day or two in advance and just leave in the fridge to chill. I recommend waiting to top with the whipped cream until just before serving though, because it tends to lose it's volume over time.

Many people say this cake is best the next day anyway, but we can never wait and always dig into it within a couple of hours of making it! You can serve tres leches cake at room temperature or chilled straight from the fridge. Personally, I like it closer to room temperature, but it's delicious both ways!

Be sure to keep leftover tres leches cake in the fridge where it will be good for 3-4 days. 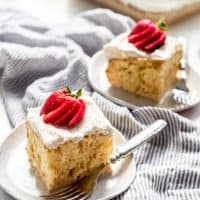 For the tres leches mixture

Recipe adapted from The Pioneer Woman.