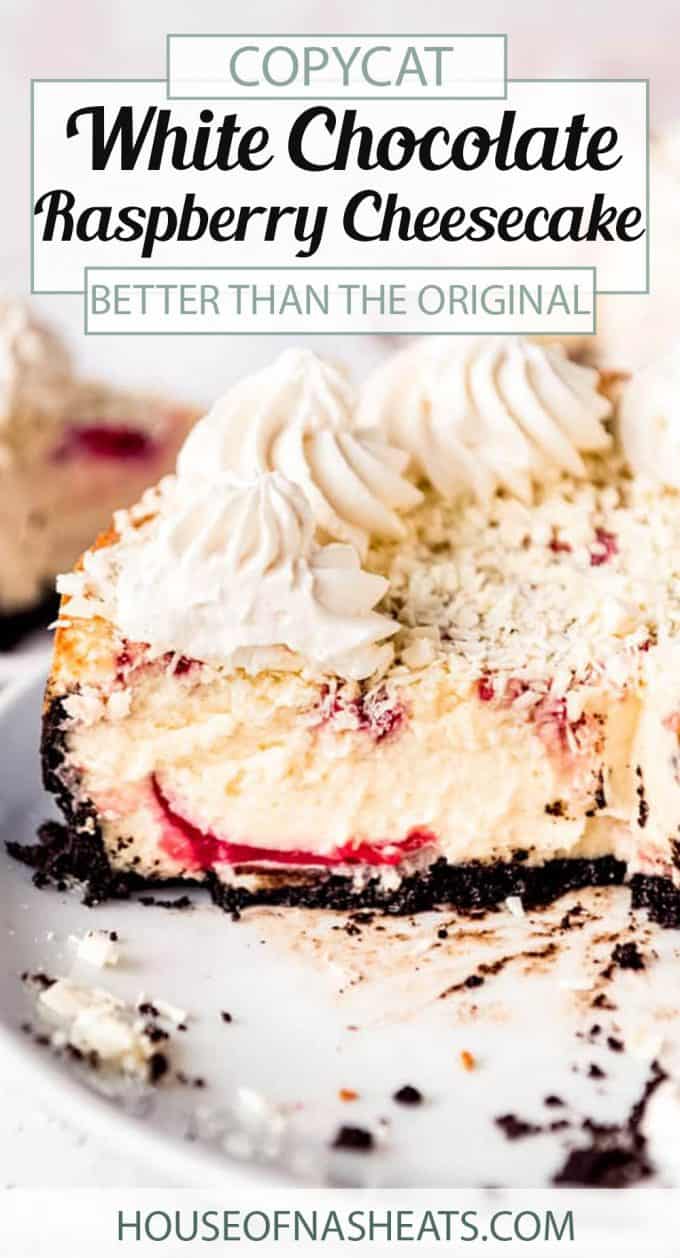 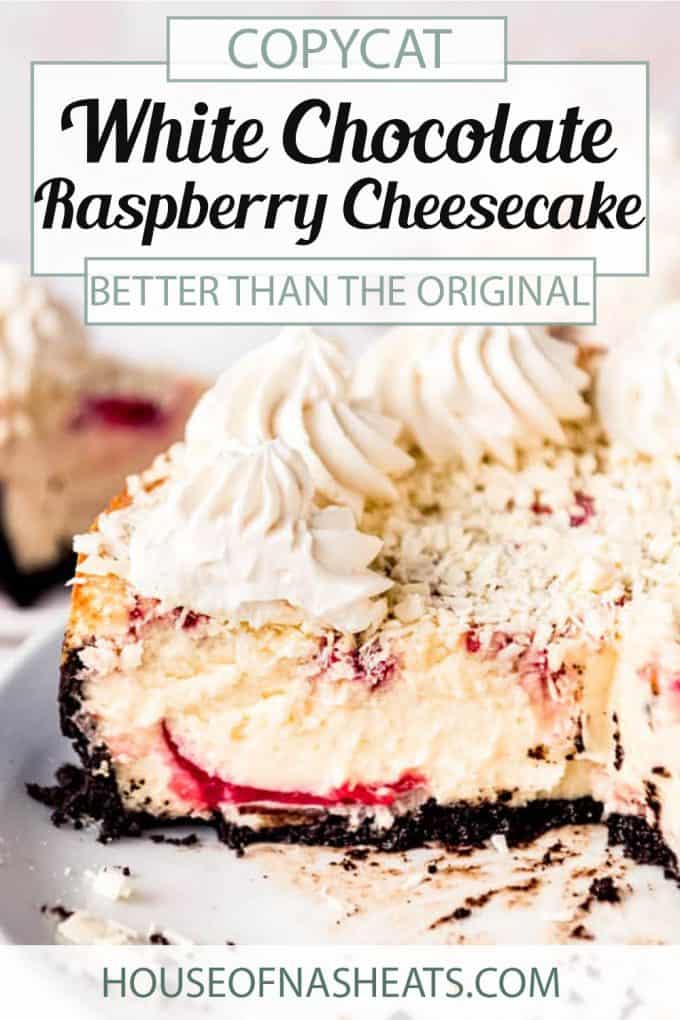 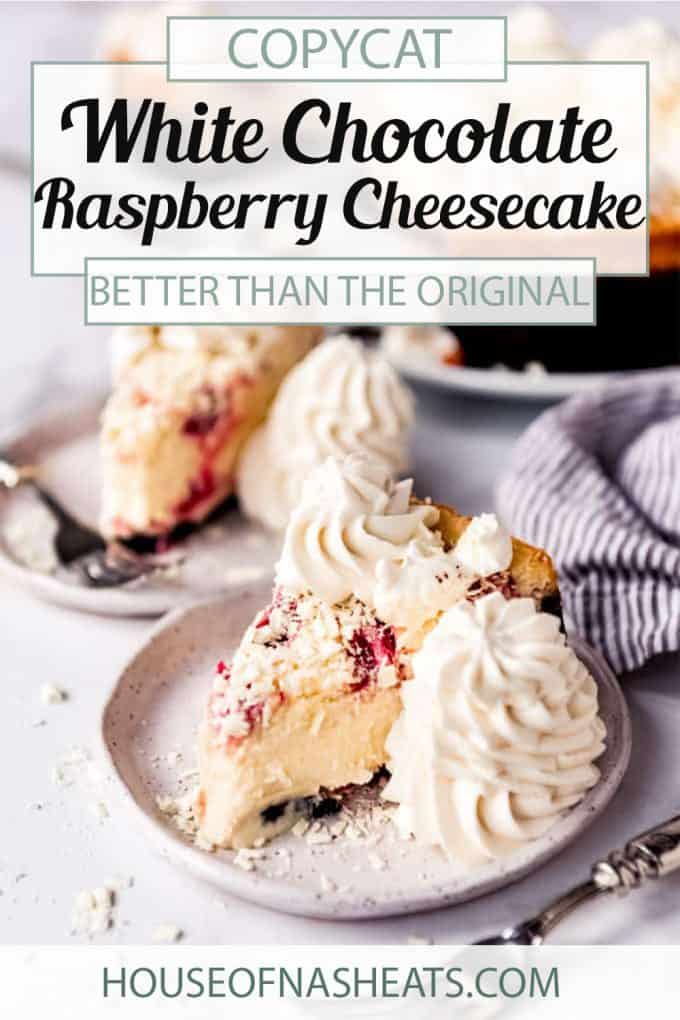 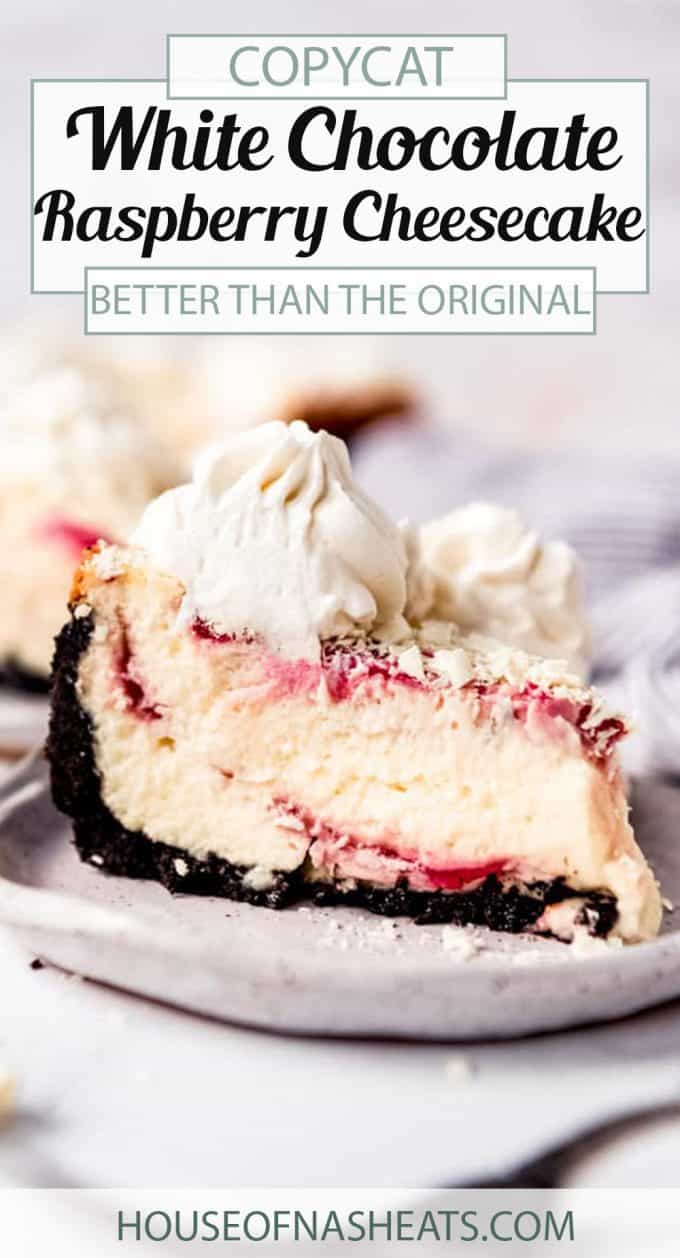 This Copycat Cheesecake Factory White Chocolate Raspberry Cheesecake is better than the original! This step-by-step cheesecake recipe is easy to make, giving you a fail-proof slice made fresh right at home for a fraction of the cost! Perfect for holidays and special occasions, or just because!

To me, cheesecake is the best way to finish off a meal! For a quick and easy cheesecake, try our Instant Pot Classic Cheesecake. Or if you love chocolate, maybe our Black Forest Cheesecake is for you. And for something a little extra crunchy, try our Pecan Pie Cheesecake Bars!

I confess that I have long been a fan of going to the Cheesecake Factory when we are eating out. We haven't done it nearly as much over the past few years, but for quite a while it was our celebratory place that we went.

I was so disappointed when I learned that all the cheesecakes at the Cheesecake Factory are manufactured elsewhere and then shipped frozen the restaurant and thawed before serving. I mean, I totally get it, but it still kind of ruined the magic for me just a bit.

But still I love the Cheesecake Factory so much that I've actually recreated a few other favorites from their menu on here like the Chicken Madeira and their Sweet Molasses Brown Bread. One of these days I'll get around to sharing a recipe for banana cream pie cheesecake, which is Paul's favorite dessert to order there.

Of course, when I love a recipe enough, I just have to make it at home and make it even better. That's precisely where this White Chocolate Raspberry Cheesecake recipe comes in. It is AMAZING!

The best part about being able to make my favorite cheesecake recipe at home is...I can have it whenever I want! It's great for holidays, special occasions, even birthdays. Really, you don't need a reason to make this White Chocolate Raspberry Cheesecake Factory cheesecake. It is the perfect after-dinner sweet treat anytime.

2. Make the raspberry swirl sauce. Combine raspberries, water, sugar, and cornstarch in a medium saucepan over medium heat. Cook and stir until thickened and boiling, about 5 minutes, and then strain through a wire mesh strainer.

3. Mix the cheesecake batter. Next, melt white chocolate chips and heavy cream (or half-and-half would also work) in the microwave in short bursts, stirring frequently until smooth. Beat the softened cream cheese in a large bowl until smooth, and then add the sugar and sour cream. Add eggs, beating on low speed just until combined. Next, beat in melted white chocolate, vanilla, and cream.

4. Put it together. Pour HALF of the batter into the crust. Dollop half of the raspberry sauce (about 3 tablespoons) over the batter and swirl with a skewer or knife. Add remaining batter and then dollop the remaining sauce. Swirl again.

5. Bake, cool & chill. Bake 60 to 70 minutes with a pan of water on the rack below the cheesecake just until set. Turn off the oven and crack the oven door open. Let the cheesecake cool for 1 hour in the oven before removing. Next, take it out to cool completely and chill it in the fridge.

6. Whip up the topping. Beat heavy cream, powdered sugar, and vanilla using a hand mixer or in the bowl of a stand mixer fitted with a whisk attachment. Finally, sprinkle the cheesecake with the white chocolate shavings, then pipe the whipped cream in decorative swirls around the edges to finish.

How do I store this White Chocolate Raspberry Cheesecake?

In the refrigerator, this cheesecake will last for up to 5 days. Store it in a container if possible, or carefully covered with aluminum foil.

Can you make cheesecake in advance?

Yes! You can freeze the entire cheesecake whole if you need to make a bunch of cheesecakes in advance. Or slice and freeze individual slices, then wrap in plastic wrap and store in a freezer-safe bag for up to 3 months. Thaw completely in the fridge overnight before serving.

Is a water bath necessary for cheesecake?

Well, I'm going with a yes and no answer. Does a water bath help the cheesecake cook more evenly so it is less likely to crack on top and to not sink in the middle as much? Absolutely!

Do I make cheesecakes without water baths all the time? Yup. And they are still delicious. The approach I took with this cheesecake is sort of a middle of the road approach where I put a pan of water on the rack below the cheesecake, rather than actually baking the cheesecake in a water bath. It sill creates a more moist oven environment, but doesn't run the risk of water seepage.

Why did my cheesecake crack?

There are three major culprits behind a cheesecake that cracks. First on the list of causes for cracked cheesecakes is overbaking! The cheesecake should just barely be set in the middle. You can also tell by appearance. When it's a golden color on top, it's ready! Just turn the oven off and let it cool for about an hour.

Second is overbeating the filling mixture after adding the eggs. This adds too much air into the batter, which can cause it to crack. Go ahead and beat the cream cheese and sugar until creamy, but once you add the eggs, try not to mix the batter to fast or too long. 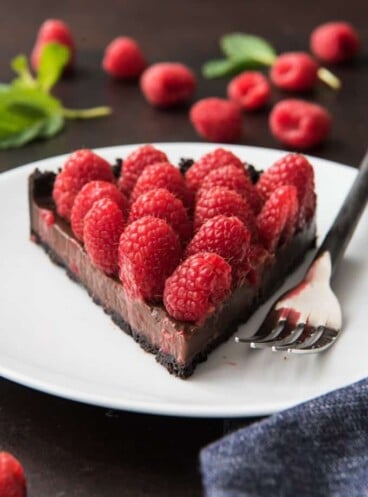 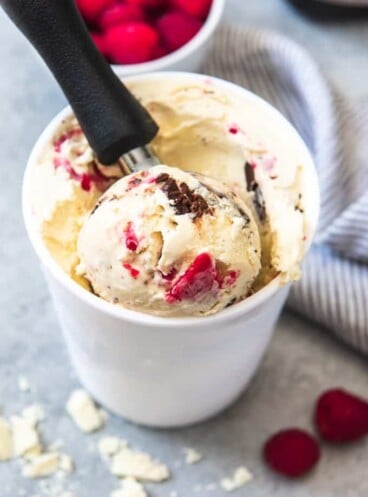 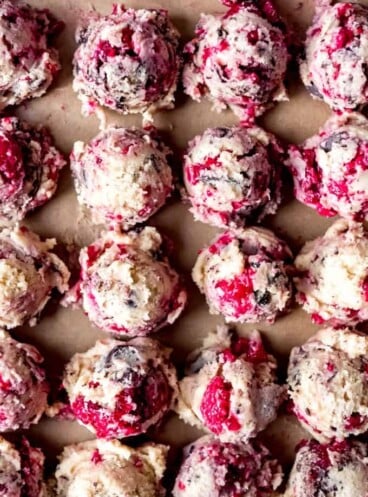 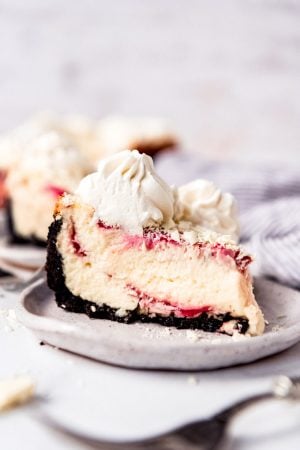