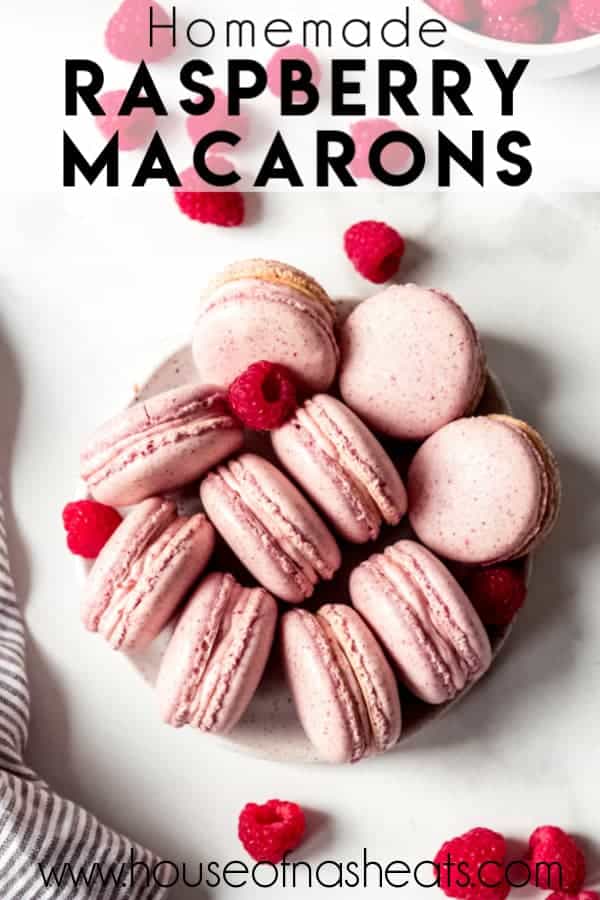 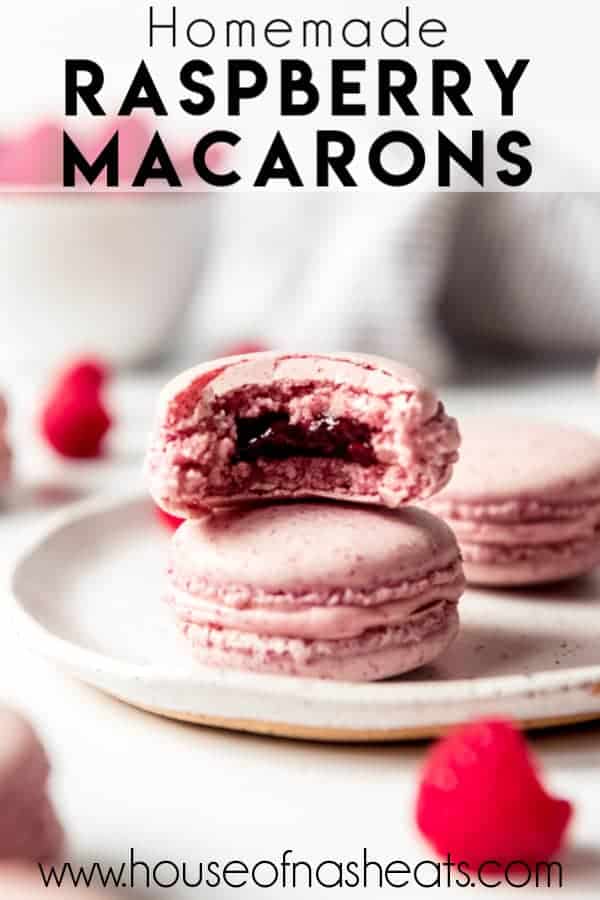 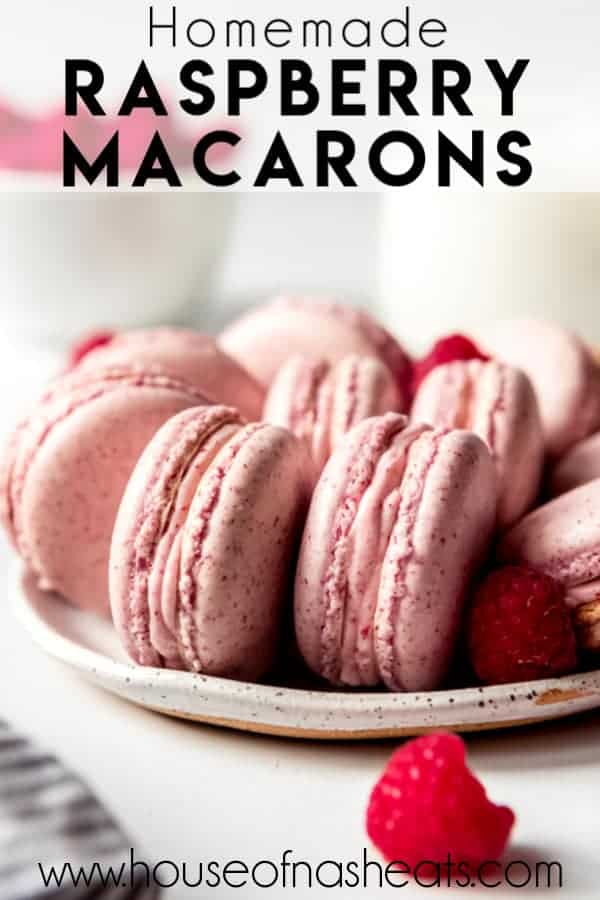 These pretty-in-pink Raspberry Macarons are filled with raspberry jam and raspberry buttercream and are the perfect way to end any meal!

If you love macarons, be sure to try my Pistachio Macarons, Chocolate Macarons, and Lemon Macarons as well!

I have a serious obsession with raspberry macarons. So much so that I have another similar-but-different-enough recipe for Jolly Holiday Raspberry Rose Macarons that are a copycat version of the ones at Disneyland. They are shaped like giant Mickey heads with fresh raspberries and a creamy raspberry-rose filling in the middle.

But I wanted to share a more classic version of a raspberry macaron that is made using freeze dried raspberries, which gives the natural pink color and sweet-tart flavor to the macaron shells, rather than relying on food coloring. Plus, these ones are filled raspberry jam, which makes them exceptionally delicious.

Of course you can make them any time of the year, but I think these are especially perfect for spring & summer! 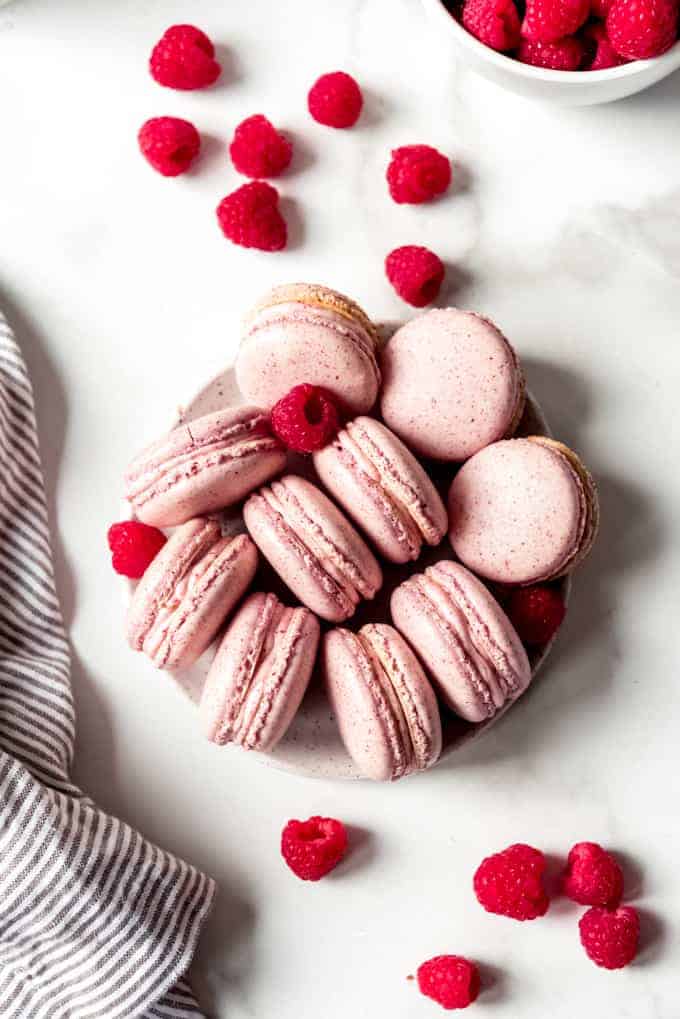 Macarons are a creamy filled cookie sandwich that is made mostly of almond flour, egg whites, and sugar. It’s a French pastry shell that is both smooth, crisp, light and somewhat chewy in texture.

With practically unlimited flavors, colors, and fillings available, there are unlimited options for finding the perfect macaron recipe to try!

Are macarons really that hard to make?

In my opinion, definitely not! For the longest time I felt intimidated at the prospect of making macarons at home. Every recipe I read for macarons uses words like "finicky" or "temperamental" and I always felt so discouraged that I would talk myself out of making them. It's not that it's entirely untrue that macarons require a bit more attention than most recipes, but I don't actually think they are hard to make at all.

I've been on a macaron kick lately and made a whole bunch of flavors for a church fundraiser the same week that I taught a group of teenage girls how to make macarons. It was definitely macaron overload, but the thing I have found with macarons (and baking in general) is that the more you practice making them, the better you get at it and the more consistent your results will be.

When I finally did go for it, I was frankly surprised at how delicious my very first batch turned out, even if they weren't perfect. Most of them even had "feet", which is the ruffly looking border at the bottom of proper macarons and a hallmark sign that they were well made. And even the hollow or feet-less (foot-less?) ones still tasted great once they were filled!

So maybe macarons aren't as easy to make as chocolate chip cookies. But they definitely aren't as impossible to achieve as most people seem to think! The ingredient list is short and the techniques used are easier than you might imagine, and probably familiar to most people.

My one exception is if the weather is very rainy or very humid. That's the only time when I've had difficulty with my macarons and it's because the shells didn't dry very well before baking.

How to Make Raspberry Macarons

Process freeze-dried raspberries into a fine powder with a food processor (affiliate link) or blender. You can usually find freeze-dried raspberries near the dried fruit section of your regular grocery store, and they are always at Trader Joe's or you can order them online. Just pulse away until they are finely processed since you will be sifting them through a fine mesh sieve and the larger chunks will need to be discarded.

Sifting. It really is important to sift the almond flour, raspberry powder, and powdered sugar together TWICE through a fine mesh sieve. Not only does this help lighten the mixture and evenly combine the ingredients, but it also gets rid of larger bits of almond flour and raspberry seeds, which can just be tossed.

Personally, I find this to be the most tedious part of making macarons. It can take a while to sift everything, but it's one of my keys to success for excellent macarons.

Beat the egg whites. In a large, clean bowl, beat aged egg whites on medium speed until they are frothy, about 1 minute. I always use my KitchenAid with a whisk attachment for this part of things, but you could do it with a hand mixer instead.

To age egg whites, separate the whites and yolks, then put the whites in the fridge overnight. The next day, let them sit out on the counter for 1-2 hours before making the macarons.

Honestly, I don't always have time for this and will sometimes skip the overnight period in the fridge, but I always let the egg whites sit out for 1-2 hours so they really are room temperature at the very least.

While the mixer is running, gradually add in the granulated sugar, about 1 tablespoon at a time, whisking for 20 seconds or so after each addition, until all of the sugar has been added. Continue to whisk on medium to medium-high speed until stiff peaks form.

Don't overbeat the egg whites (which is why I don't recommend upping your speed any higher than medium-high) but definitely whisk until the egg whites hold their shape when you lift the beaters out.

Fold in the almond flour mixture. Add all of the almond flour mixture and start folding with a sturdy spatula. There are some hilarious memes about people's confusion with the baking term of "folding" things in, but it just means using the spatula to scrape the stuff at the bottom of the bowl and lift it up on top, as opposed to stir in a circular motion. You repeat this folding action (sort of a "j-shape" motion that is technically referred to as "macronage") until you get a good "lava" consistency.

You will know you have mixed it enough when a thick ribbon of batter flows off your spatula when you hold it up over the bowl. The batter should melt in on itself after about 10 seconds and you should be able to make a figure-eight shape with the batter a couple of times before the batter has all run off the spatula.

This is where I think most people get hung up making macarons for the first time, but don't let that stop you! I taught a group of 9 teenagers how to make macarons with this technique and every one of them had perfect macaron shells with feet (the ruffly looking edges at the bottom of each macaron shell that are the hallmark of excellent macarons) on their very first try.

Hopefully these images will help you see how the batter changes as you mix it.

Pipe the macaron shells. Line two baking sheets with parchment paper or silicone baking mats. Some people like to trace 1 ½" circles on the backside of the parchment paper as a guide for piping, and you can even buy special macaron silpat mats for this purpose, but I always just freeform it because that's how I roll. It's also why my macarons aren't perfectly 100% uniform in size. But either way it's important not to pipe these directly onto your baking sheets or they will stick.

Transfer the macaron batter to a piping bag fitted with a large round tip. Or just put it in a large heavy-duty ziploc bag and cut off one corner. Pipe 1 ½" circles a couple inches apart on the paper or mat. Then rap the baking sheet on the counter a few times to help remove any air bubbles in the shells. You can poke air bubbles that form on top with a toothpick if you need to.

Let the macarons dry for 30-60 minutes at room temperature. This part is key to getting those "feet" I mentioned earlier. Leaving the macarons out lets the top dry out a bit. I find I often need to open the windows in my house a bit so that a helpful cross-draft can move this part along.

You should be able to touch the tops of the macarons without any of it coming off on your finger before they go into the oven. They will feel tacky, but not sticky. If they are still sticky, they haven't dried enough and you need to wait a little bit longer and maybe place them somewhere where air can circulate around them a bit.

Preheat oven and bake. Let the oven preheat for a good 20 minutes at 300 degrees F, then bake one tray of macaron shells at a time for 16-18 minutes. Let the macaron shells cool completely on the baking sheet before attempting to remove them from the baking mats or parchment paper.

Make a raspberry buttercream filling. This is optional since technically you could just fill the shells with jam and nothing else. But I find that piping a border of buttercream around the edge both helps to hold the jam in so it doesn't all squish out, and it balances the flavors a bit better since too much jam can overpower the sweet-tart raspberry flavor of the shells themselves.

While the macaron shells are baking, beat the butter until creamy and smooth in a large bowl using an electric or stand mixer. Add powdered sugar, raspberry jam, and heavy cream, then beat again until light and fluffy.

Spoon the raspberry buttercream into a piping bag fitted with a small-ish round tip (or again just cut off one corner or a ziploc bag), then pipe a border around the bottom side of half of the shells. Fill with ½ teaspoon of jam, then sandwich another shell on top to complete the macaron. Ideally, macarons are best the day after they are made, but it's awfully hard to wait that long!

How Do I Fix Overcooked Macarons?

Overcooked macarons are actually really easy to fix unless you go all the way and burn them, in which case, there's probably no salvaging that. But if they are a little brown around the edges and too crispy, still fill and assemble the macarons as usual and let them mature for 2 or 3 days.

The older they get, the softer that they will be thanks to the shell absorbing some of the moisture of the filling! Not only will the cookies soften up, but the flavors will develop better as well making them even more delicious!

How Long Do Macarons Last After Baking?

When you keep them stored at room temperature (in an airtight container) you can get them to last up to 24 hours and still taste great. If stored in the same manner but in the fridge, they’ll last for about 5 days. If you just fill these shells with buttercream, they will last even longer in the freezer, although I feel like they don't do as well frozen with jam in the middle.

More raspberry desserts you will love 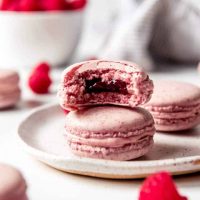