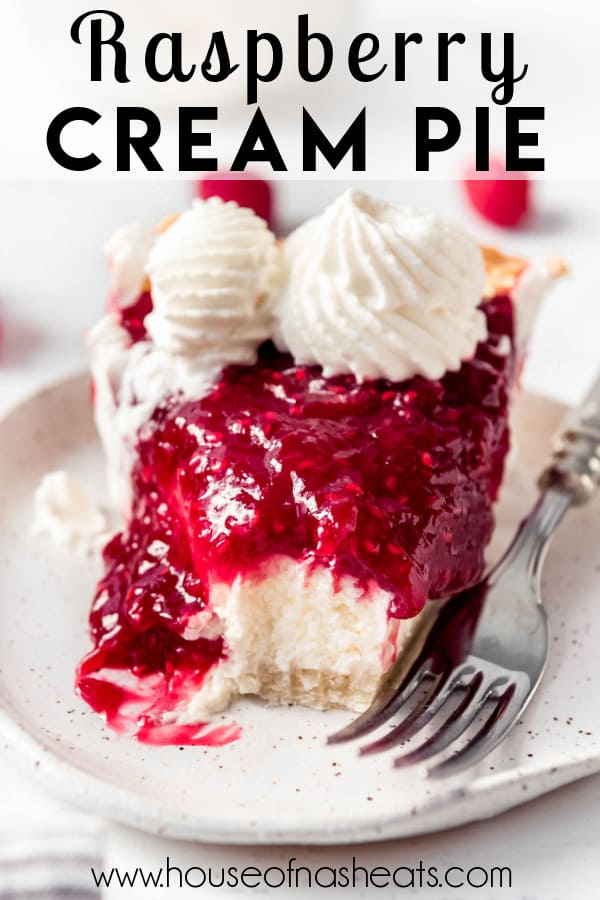 Raspberry Cream Pie has layers of sweet cream cheese filling underneath a sweet-tart raspberry jam topping, tucked into a flaky, buttery pie crust with whipped cream on top! It's perfect all year round and can be made with fresh or frozen raspberries!

We love fresh raspberry desserts and have shared a bunch of them on here. Some of the most popular recipes with readers are our Raspberry Macarons, Raspberry Pretzel Salad, and Raspberry Chocolate Tart.

My friend Jana brought this divine raspberry cream pie to our annual Pi Day celebration this year. It, along with my No-Bake Oreo Pie, were the standouts from over a dozen options that were available to choose from, which is definitely a testament to how popular this pie was among our friends.

One of my favorite bakery cafes in Utah, Kneaders, actually makes a raspberry cream pie just like this that sells out all the time, so it's no surprise that it was a hit. If you love Kneaders like we do, you might also want to try my cream cheese brownies, which are another recreation of one of my favorite desserts there. Or my Turkey Bacon Avocado Sandwich which has a copycat Kneaders sauce. I'm kind of obsessed with that place and it's always at the top of my list whenever I go visit family who live in Utah.

The cream cheese filling is the perfect compliment to the punchy, in-your-faceness of the raspberry jam-like layer on top. It's kind of no-bake cheesecake meets raspberry pie kind of hybrid situation that's pretty much irresistible.

I can definitely see how people would love this dessert just as much with a graham cracker crust as a traditional pie crust, so feel free to go with whichever you prefer most.

The recipe itself is pretty simple, although it takes a bit of prep work to blind-bake the pie crust, then let the filling set while making and cooling the raspberry layer. The good news is that the pie keeps well in the fridge and most of the work can be done in advance. Then when you are ready to serve, you can pipe on whipped cream swirls and pile some fresh raspberries in the center of the pie for visual impact.

This pie would be perfect in your Thanksgiving pie line-up this year for something new and different that will have everybody talking! But it is also a great summer pie since it is delicious served chilled.

How to Make Raspberry Cream Pie

Does this pie have to be refrigerated?

Yes, you will want to refrigerate your raspberry cream pie because of the cream cheese in the filling layer. It shouldn't sit out of the fridge for longer than 2 hours.

Can I use a storebought pie crust?

You sure can! Although if you haven't tried my homemade pie crust recipe yet, you should really give it a shot! It just might change the way you feel about making pie crust from scratch!

Can this recipe be made gluten free?

Yes, you can use a 1-to-1 gluten-free flour substitute to make your pie crust, which works great. Everything else about the recipe is already gluten-free!

Can this pie be made in advance?

You can make the pie up to 3 days in advance, although you should wait to decorate with whipped cream until just before serving. It can even be frozen and thawed in the fridge overnight before serving. 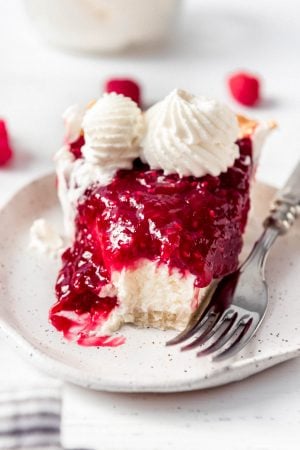 5 from 5 votes
Amy Nash
Course Dessert
Cuisine American
Servings 10 servings
Raspberry Cream Pie has layers of sweet cream cheese filling underneath a sweet-tart raspberry jam topping, tucked into a flaky, buttery pie crust with whipped cream on top! It's perfect all year round and can be made with fresh or frozen raspberries!