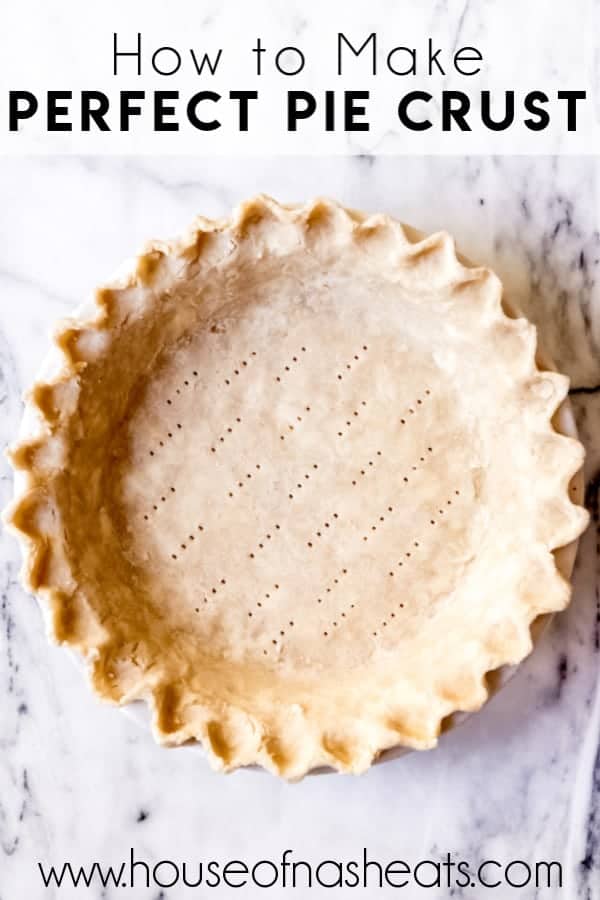 Don't be intimidated by a Homemade Pie Crust! This easy buttery, flaky pie crust recipe turns out great every time and is the perfect starting place for all your favorite pies.

If a classic pastry pie crust isn't what you want, be sure to also check out my post on How to Make a Graham Cracker Crust.

Every year we hold a Pi Day pie party and every Thanksgiving I'm always in charge of making pies. Pie is my favorite, really it is. I just love a good, flaky, buttery pie crust filled with wonderful seasonal fruit. I am one of those people who would take pie over cake, any day of the week.

My husband Paul is the opposite. He has started to come around to pie, but when we were first married he was just not a fan of anything other than banana cream pie, and even then he almost never ate any of the pie crust. So basically, he was a fan of banana pudding.

My handsome fella has come far in the years we have been married and now will fairly enthusiastically devour a slice of apple pie, or peach pie, or strawberry rhubarb pie, although he still usually leaves part of his crust on his plate like a 4-year old (love you anyway sweetie!). But an old-fashioned banana cream pie is still his favorite.

Lots of people tell me that they are afraid to make pie though because they don't know how to make a pie crust. But the perfect pie crust is easier to make than you think! I've included measurements below for both double-crust and single-crust pies so you don't have to do the calculations on your own!

These are all pretty basic tools, but you will want them on hand to make making a pie crust easy as, well, pie.

How to Make Pie Crust

If you have ever felt intimidated not knowing how to make pie crust from scratch, this perfect pie crust recipe will solve your pie crust woes. You can make it easier with a food processor by just pulsing flour, salt, a little sugar, and fat, then adding a little ice water. Or do it the old-fashioned way and make this easy pie crust recipe by hand using a pastry cutter.

This perfect pie crust recipe originally comes from the America's Test Kitchen cookbook where they call it their "Basic Crust". They experimented with a variety of combinations of the butter and shortening, and decided that 3 parts butter to 2 parts shortening is "optimal for both flavor and texture" and that a ratio of 2 parts flour to 1 part fat produces a pie dough that is easier to work with and results in a tender and flavorful baked crust. I'm not going to argue with that.

It really is important to use chilled butter in your pie crust. And if you are using those Crisco shortening sticks, go ahead and keep those in the fridge as well.

Cold fats makes for a flakier, better pie crust because when the pie bakes in the oven, the fats melt creating flaky, tender layers. If the fats get too warm before baking, you won't have the same flaky result. When you aren't working with the pie pastry dough, I recommend sticking it in the fridge to keep things nice and cold.

Cutting in the fat

To make the pie crust, first combine flour, salt, and sugar in a large bowl or food processor and give it a quick whisk to evenly distribute the ingredients. Then, take your butter and shortening out of the fridge and cut the butter into small cubes.

Now you are going to cut in the fat, which is a term that means chopping up the butter and shortening into small pieces so they are evenly distributed throughout the flour and other ingredients. The idea is to cut up the fats until they are no bigger than the size of small peas. You can either do this with a pastry cutter, which I've shown in the photo below, or using a large food processor.

Using a pastry cutter: If you have a pastry cutter, you're going to cut the fat in by hand. It takes a little more work, especially since the butter is very cold, but really it's not too bad. And honestly, it's my preferred method after years of making pie crusts.

Using a food processor: A good food processor makes the job easier, but you run the risk of overworking the dough. Just add the flour, salt, and sugar to the food processor, then pulse in the butter and shortening, watching until you see that the fats are reaching the "small pea" size.

You really do want to be able to see dots of butter in the crust later when you are rolling it out and over-processing the pie dough now will result in a tougher crust.

Once the fats are cut into the flour, it's time to ice water 1-2 tablespoons at a time just until the crust starts to come together. Using ice water helps keep the crust ingredients nice and cold while you are working with them.

I find that I like using a fork to mix the ice water into the crust. As each tablespoon of water is added, I lift and stir to make sure that the dry flour on the bottom of the bowl gets evenly moistened so there aren't wet areas of the dough and dry sandy areas, but it all comes together. You may not need all of the water!

The dough should not be sticky and doesn't actually have to form a ball, but if you were to grab a handful of it and squeeze, it would all stick together in a clump without falling apart.

Once the pie crust dough starts coming together with the water, you can divide it into two (if making the double-crust recipe) and shape it into flat discs. Go ahead and press the pie crust dough to help it come together, but try not to knead it over overwork the dough. Wrap each disc in plastic wrap and stick the pie crusts in the fridge.

The pie crust dough really needs to chill for an hour, which really does make it easier to work with when you go to roll it out. Chilling also gives the fats a chance to get really cold again after some time spent out at room temperature as you combined everything to make the dough.

You can ever freeze the pie crusts as this point to have on hand, which is a great make-ahead step going into holidays like Thanksgiving where there are so many other things you might be preparing. Just store the wrapped discs in a freezer-safe ziploc bag for up to 3 months and thaw in the fridge overnight before you plan to use them.

How to Roll Out Pie Crust

When it comes to rolling out the dough, make sure to flour your surfaces. Rub a little flour on the rolling pin (affiliate link) and sprinkle on top of the crust, as well as generously dusting the surface you will be rolling the crust out on.

Start by pressing the rolling pin into the center of the disc one direction, then the other, then use long strokes with your rolling pin to roll it out into a circle. I usually pause after a few strokes and use a thin metal spatula or bench scraper to lift the crust up and add a little extra flour underneath to keep it from sticking.

Roll from the center of the crust outwards, working in different directions, rather than just rolling from the bottom up. The crust should be thin and slightly larger than your pie plate, but not so thin that it tears when you try to transfer it.

I know pie crust connoisseurs will recoil in horror when I say this, but if you are new to making pie crust from scratch and your crust is falling to pieces, go ahead and squash it back into a ball and re-roll it. I know it won't be as tender, but it's still going to turn out fine and you will be proud of what you accomplished! And the next time it will be even easier, I promise. Build a little confidence and with practice, you will learn to roll your pastry dough out so that it doesn't fall apart on you. Truthfully, this easy pie crust recipe is such a good one that I doubt you will need to go that far, even on your first attempt.

If you look closely, you even see how the crust below is marbled with butter. That's the mark of an excellent pie crust!

Transferring the pie crust to a pie plate

This is where I find a bench scraper really comes in handy. Set the rolling pin aside and use a bench scraper or thin metal spatula to scrape underneath all around the edges of the pie crust to loosen it from the rolling surface. You don't have to go all the way under the whole thing - just the edges for now.

Once the crust is on the rolling pin, slide the pie plate right next to it and unroll the crust onto the pie dish, adjusting it to fit. There should be some overhang around the edges which you can trim off later.

Now you are ready to fill the bottom crust with your favorite pie filling, or trim and crimp the edges so you can blind-bake the crust for a cream filled pie!

If you are making a double-crust pie crust, go ahead and fill the bottom crust, then roll out the top crust and lay it on top with slits cut in the top crust for venting. Or cut out strips to make a fancy lattice pie crust!

Trim and crimp the edges using your fingers to create a scallop design (traditional and my favorite) or a fork (fun and easy!). And always be sure to brush the top crust with an egg wash so it bakes up a beautiful golden brown!

How to Blind Bake a Pie Crust

If you need to blind bake a pie crust, say for a Coconut Cream Pie, no-bake pie, custard or other cream pie, I have an entire post where I share all my best tips & tricks for how to blind bake pie crust while avoiding too much shrinkage or having it puff up.

But in short, you should preheat the oven to 400 degrees F. Line your pie crust with a crumpled piece of parchment paper, then fill with pie weights, dried beans, or some other heavy filling that can be easily removed.

Bake for 15-18 minutes, just until the crust is starting to brown a bit around the edges. Then remove the crust from the oven and carefully lift out the parchment paper to pour the pie weights into a heat safe bowl to cool down.

Return the crust to the oven without the weights now and bake another 7-8 minutes for a partially baked crust or 14-16 minutes until golden brown for a fully baked crust.

Love Pie? Here are some of my favorite Homemade Pie Recipes for pie inspiration! 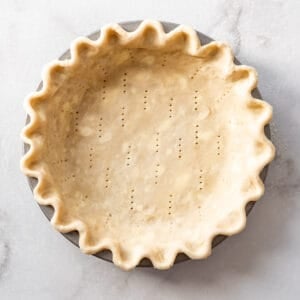