We sure love graham crackers around here! Some other recipes featuring them include Graham Canyon Ice Cream, S’mores Bars, and S’mores Cupcakes with Graham Cracker Frosting.

The most frequently told story of my childhood by my parents is one involving graham crackers.

As a kid (and now as an adult), I always loved graham crackers. Except I had this weird thing where I would only accept WHOLE graham crackers. If it had a corner broken off, I wasn't having it. Even if my mom broke one in half in front of me to show that it really was the whole thing, I would throw a fit about it and refuse to eat the broken graham cracker. I only wanted the full sheets.

It's slightly embarrassing to admit that I still prefer the whole graham crackers and always pull them out of the sleeve for myself first before deigning to eat the broken ones now that I am an adult.

So when I was 2 and the woman in front of my family at church was giving graham crackers to her young children to keep them content, my parents were worried when I started pleading to have one. The woman kindly turned around and offered one to me, only it wasn't the full sheet. So I grabbed it and chucked it across the chapel. My parents were mortified.

And that story is now legend in my family. Needless to say, I take all things graham cracker related, including graham cracker pie crusts, pretty darn seriously.

That said, I'm not going to judge if you just find using the store-bought crusts more convenient. I've been there and done that myself.

And it's only 3 ingredients - graham crackers, sugar, and butter - and takes all of 5 minutes to throw together, so.....

I made this particular graham cracker crust for key lime pie specifically. But it can be used with almost any pie recipe you want, especially if you aren't a fan of traditional pie crust made with flour, fat, salt, and water that gets rolled out and baked.

Or bake up a crust, then break it into chunks and sprinkle it over ice cream or mix it into brownie batter!

How to Make a Graham Cracker Crust

How do you make a graham cracker crust stick together?

Butter is the only binding agent in a graham cracker crust, so if you have had problems with your crust sticking together, it's most likely the result of the butter to graham cracker crumbs ratio being off. If you decide you want a thicker crust, you can't just add more crumbs (say 2 cups) without simultaneously increasing the butter.

At the same time, you don't want to make your crumbs soggy with melted butter.

Another important part of getting the graham cracker crust to stick together is to apply some pressure to it.

I always use a glass to do this, tamping and packing the crumbs together, but a flat-bottomed measuring cup works perfectly well also.

The final step is to set the crust either by baking or chilling. Baking the crust will melt the sugar and help bind the crust together. Chilling with cause the butter to firm up again and help the crust hold together.

Do you have to bake a graham cracker crust?

The short answer is no. You could just make the crust and press it into a pie plate (affiliate link) or springform pan, then chill in the fridge for an hour or two to firm up for an easy no-bake graham cracker crust.

But I think it tastes best when baked. It not only helps the crust set up and be sturdier, which is great for cream pies, but I also love the slightly nutty, toasty flavor it takes on after baking the graham cracker crust. 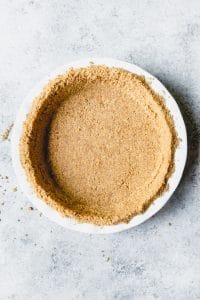 How to Make a Graham Cracker Crust

For a slight flavor change, you can substitute an equal amount of brown sugar for the granulated sugar, or add ½ teaspoon of ground cinnamon to the graham cracker crumbs.