S'mores Bars are everybody's favorite campfire treat except in bar form and without the camping! Gooey marshmallows, buttery graham cracker crust, and melty chocolate, all in wonderful ooey, gooey cookie s'mores bars that you won't be able to stop eating!

The flavor of classic s'mores will always and forever be linked to my childhood and one of my obsessions. Some of our other favorite s'mores-inspired desserts are Chocolate Chip S’mores Cookies, S’mores Snack Mix, and this show-stopping 3-Layer S’mores Cake.

First off, Happy 4th of July! It's one of my very favorite holidays, right up there next to Halloween. I love everything about it - fireworks, bbq's, music by John Philips Sousa, and especially the food. You always here about the magical first snowfall of winter, right? Well I feel that way about the first s'mores of the summer.

I mean, who doesn't? And s'mores bars on the 4th of July?! I mean, apple pie is definitely all-american but so are s'mores.

And if you love brownies and bars like these, you might also want to check out my pecan pie cheesecake bars, strawberry rhubarb crumb bars, Mississippi mud nrownies, easy caramel pecan brownies, or peanut butter blondies.

After baking that for a bit in the oven, you pull out the bars and top them with more marshmallows and Hershey's squares (rectangles? but don't we call them squares?) before throwing them back in the oven to finish cooking.

Oh, and I sprinkled them with a handful of chocolate chips after taking them out of the oven just for the sake of prettier photographs, but I'm probably going to do it every time from now on.

Looking for a last minute treat for your 4th of July party? Look no further.

You probably already have everything you need for these in your pantry, even the Hershey bars. Like magic. C'mon - we all have a stash of chocolate somewhere around the house, right?

Paul has taken these to work multiple times and always comes home with requests for the recipe. One of the partners he worked for even told him that this was the best dessert he has ever eaten.

I got the same comment recently from a bunch of teenagers when I took them to a church youth event. Which is quite a testament to the power of these addicting little bars. 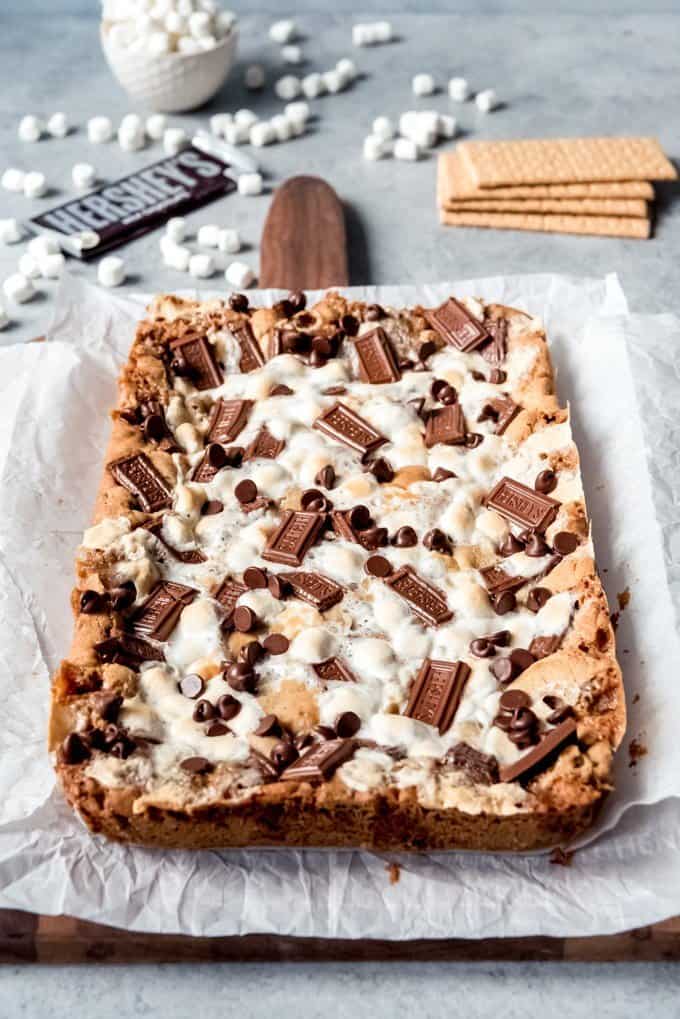 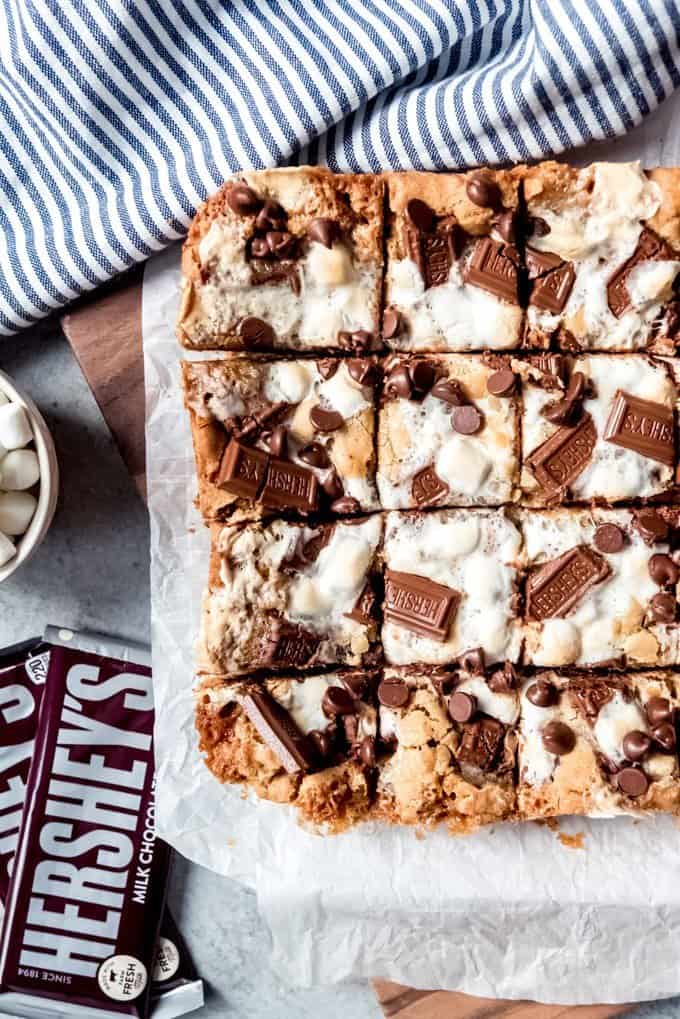 You should know, if these s'mores bars are in the house, you will probably find yourself making up excuses to walk back through the kitchen to "put something away" only to slice off a sliver of s'mores bars and hope that nobody notices.

Then you will see you didn't slice perfectly straight and have to have another slice just to even things up. And so on. Consider yourself warned.

I originally got the recipe from The Hungry Runner Girl. She brought these s'mores bars to a party thrown by a mutual friend. That's the only time we ever met but obviously we bonded over our shared love of dessert and she pointed me to the recipe on her blog, which is awesome btw.

How to Make S'mores Bars

1. Make the graham cracker crust.  Pulverize a bunch of graham crackers and mix with a little sugar and butter to make a crust. Press into the bottom of a 9x13-inch baking dish and bake for a few minutes until set.

2. Make chocolate chip cookie dough! With marshmallows!  Combine butter and sugars in a large mixing bowl and beat until light and fluffy. Add eggs and vanilla and beat again, then mix in flour, baking soda, and salt just until combined. Stir in chocolate chips and marshmallows.

3. Press cookie dough into pan on top of graham cracker crust.  Then bake for 18 minutes at 350 degrees F.

4. Top the partially baked bars with more marshmallows and broken up Hershey's bars.  Finish baking for another 9-11 minutes.

5. Try to wait for the bars to cool enough to cut them into squares.  It's not easy. They will smell amazing. 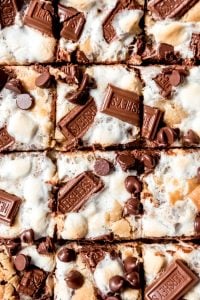 I will sometimes sprinkle the bars with a handful of chocolate chips after removing them from the oven. The bars don't need that extra bit of chocolate, but I think it makes them look extra attractive. It's a total vanity move, but I recommend it! 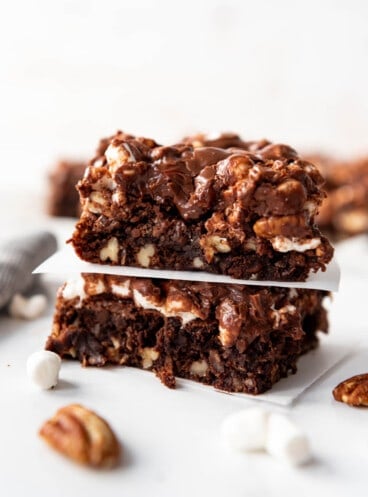 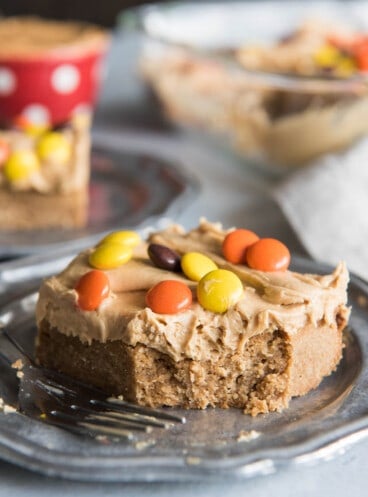 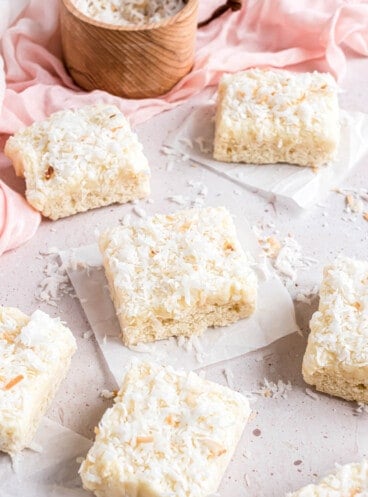