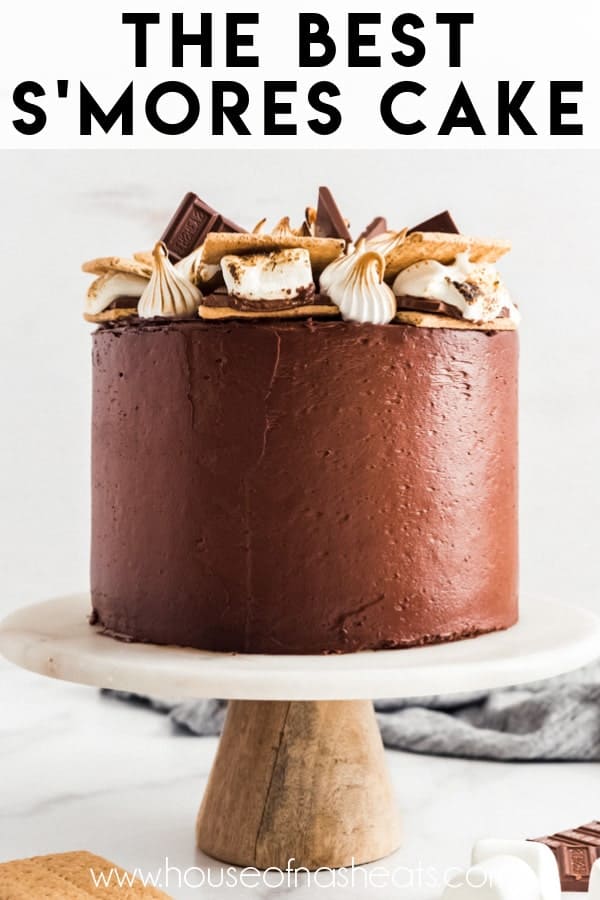 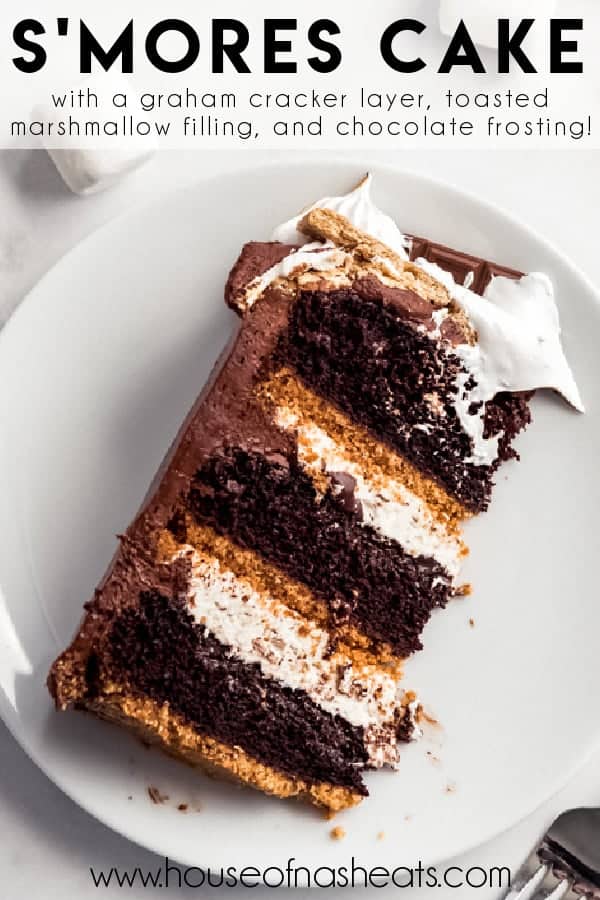 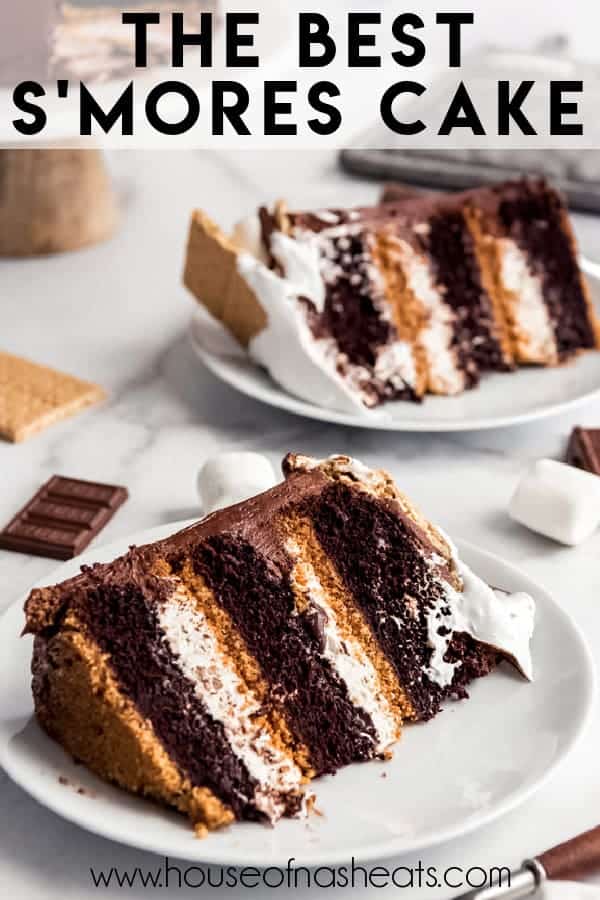 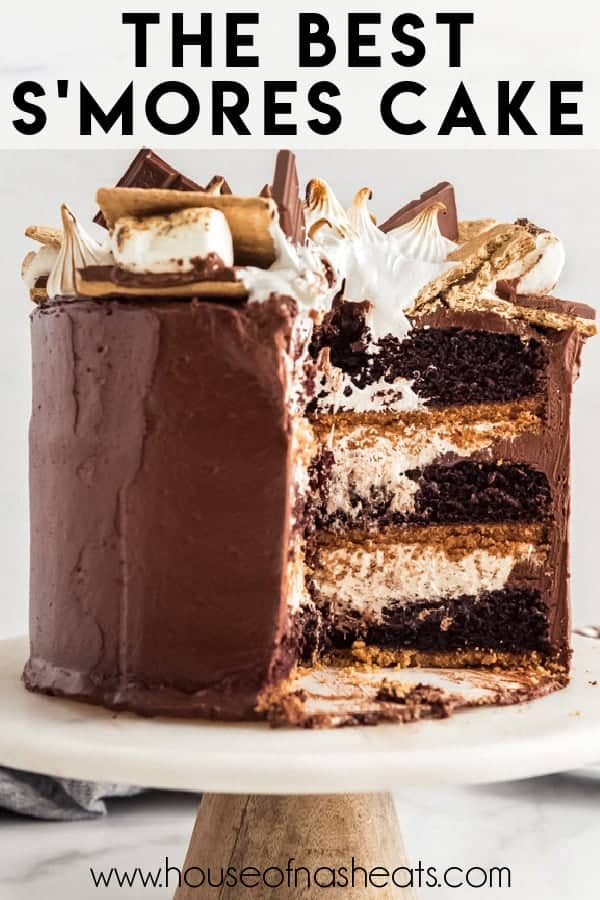 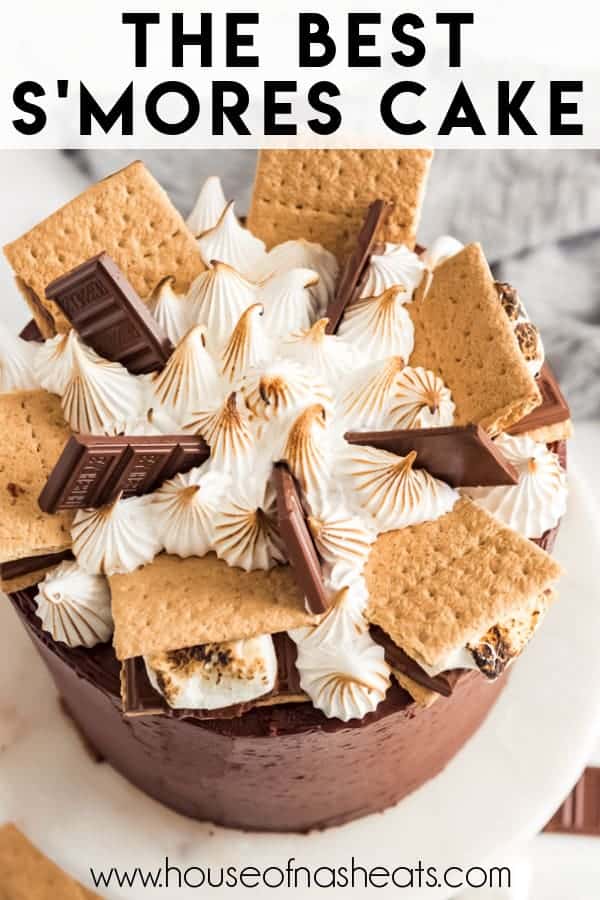 This S'mores Cake is an over the top decadent dessert with layers of moist chocolate cake, graham cracker crust, chocolate ganache, and homemade marshmallow filling, all surrounded by a luscious buttercream frosting. It's a scrumptious, irresistible twist on one of summer's most iconic desserts!

Don't s'mores just make you feel like a kid again? I think that's why we all love them so much! Some of our other favorite s'mores desserts are my much-loved S'mores Bars, the easy and munchable S'mores Snack Mix, S’mores Dip, handheld S'mores Cupcakes, and Chocolate Chip S'mores Cookies.

It took me quite a few tries to find a s'mores cake that I loved. There were a couple of other iterations of this recipe that got only "meh" reactions, including one with a graham cracker cake instead of a chocolate one that I had high hopes for but that just didn't deliver when it came to s'mores flavor.

My s'mores cupcake has graham cracker frosting that I'm kind of obsessed with, so my next thought was to go that direction. But again, it just wasn't quite what I wanted in a tall layer cake that would be good for celebrations.

It wasn't until I finally tried a thick layer of graham cracker crust as a base for the chocolate layers that things started to really come together. You can actually taste the graham cracker and there is a crunchy texture that stands up to the other elements of the cake.

The toasted marshmallow buttercream is made with marshmallows that you actually toast under the broiled until they are golden brown, then add them right to a classic butter and powdered sugar buttercream base. It's crazy good and adds that toasty, almost burnt sugar flavor that I love about the original campfire s'mores.

There is even a layer of homemade marshmallow fluff that I toasted with my kitchen torch. I fully anticipated this being a total vanity move and was prepared to tell you it was unnecessary since the cake it still super delicious without it.

But no, it's absolutely one of my very favorite parts of the over-the-top dessert. So even though it's a bit of extra work right at the end when you are so close to being done, I encourage you to power through and make the marshmallow fluff. You won't regret it!

True, there are a few components to this cake and it takes longer to assemble than most of the other dessert recipes on this site, but I promise it's 1,000 percent worth it. I cut up slices and delivered them to friends who helped with the taste testing and everybody raved about this one.

I love researching cake recipes and definitely pulled inspiration from Life Love and Sugar, Cake By Courtney, and the Preppy Kitchen for my version. They are all such inspiring and creative bakers and if you haven't checked them out, you really should!

Before we get started, there are a few things to know that will help take away a lot of the stress of making this recipe. None of the elements are very hard to make, but with a recipe like this where there are a number of different components, I want everyone to be successful on their first try! These are my best tips and tricks from an admittedly self-taught baker.

It's amazing how much easier it is to work with cake layers and buttercream frosting when you give them 5-10 minutes to set in the freezer before moving on to the next step.

Phew! That's it! Now you can slice and serve your delicious creation! It's a big cake and will feed a lot of people. If you have leftovers, I recommend slicing them and freezing individual slices wrapped well in plastic wrap so you can thaw and enjoy as much as you want at a time. 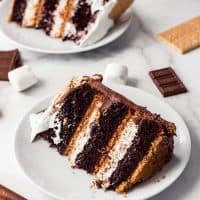