This Black Forest Cake is a glorious combination of chocolate devil’s food cake layered with sweet cherry filling and light ermine buttercream frosting in this modified version of a German original.

Some of our favorite desserts feature tart cherry filling! If you like this black forest cake, you might also want to try our Cherry Crisp Cake or Black Forest Cheesecake next!

Last week was my birthday. But in our house, we feel like one day a year just isn’t enough so we celebrate birthday week, and even jokingly celebrate birthday month. Which explains a lot about why October is my favorite month of the year.

It’s not as big a deal as it sounds – the birthday girl (or guy) basically just gets to lord it over everybody else that it is their birthday month and call in special treatment all month long (within reason – it’s no fun if you take it too far and act like a complete brat about it).

Mostly it’s things like invoking foot massage rights or stating that you will not be doing the dishes even if it’s your turn because “it’s birthday month.” Which usually elicits a good-natured groan and a night off from dish duty for the birthday person.

But since it was my actual birthday, that meant I got to make my favorite cake that I make for myself every year on my birthday – a Black Forest Cake.

Even though my normal dessert choice is a pie like this Homemade Blackberry Pie or a Salted Caramel Apple Pie, when it comes to my birthday I go traditional and have to do cake, particularly a Black Forest cake.

It’s tall and beautiful and different and there is just something about cherries and chocolate that makes me so happy! Black Forest Cake has been “my” birthday cake since I was probably about eight years old, which is around the time I first discovered it.

The credit for this recipe goes to my mom’s oldest sister – my aunt Becky – who passed away when I was a senior in high school. This recipe is especially precious to me because she used to make it and I remember asking her to share her recipe with me. Every time I make this I am reminded of her and how she loved me and how much I love her.

It’s like a little memory of love that is a birthday gift all it’s own every year even though she has been gone from us for a long time.

I’ve tweaked the recipe a little over the years, but by and large this is still my Aunt Becky’s Black Forest Cake.

Now, I’m going to come right out and admit that this is not a super authentic Black Forest Cake, which originated in Germany and is called Schwarzwälder Kirschtorte.

Paul and I lived in Frankfurt for a summer during law school and while we were there, I sampled lots of Schwarzwälder Kirschtorte. And my version just isn’t the same as those slices I sampled, wonderful though they may have been. There are lots of similarities, for sure, but true Schwarzwälder Kirschtorte typically has layers of whipped cream, maraschino cherries, chocolate shavings, and chocolate sponge cake brushed with kirschwasser, which is a sour cherry liqueur.

Wikipedia says that there is even a German law mandating the presence of kirschwasser for a cake to be labeled Schwarzwälder Kirschtorte, which I find fascinating both as someone who loves Black Forest Cake and as a former lawyer.

And the whipped cream is replaced with an Ermine buttercream (aka French-style roux icing, flour buttercream, or boiled milk icing – after 20+ years of just following the recipe that didn’t name what kind of crazy frosting called for flour and granulated sugar, I finally googled it and found all these different names for this old-fashioned frosting that is light like whipped cream but with a bit more oomph).

And you know what? It tastes amazing. Honestly, and I say this with some chagrin and a slight cringe, I like this version better than the “real” thing. I hope I don’t get nasty comments for admitting that on a food blog!

Now, if you read the description above and were wondering what Ermine buttercream is (and possibly being put-off by an alternate name like “boiled milk icing”), allow me to elaborate. It’s a frosting that is made from a roux (a little like a paste) of cooked flour and milk, that is then cooled and combined with butter and granulated sugar (not powdered sugar) and beaten until super light and fluffy.

It might sound bizarre to make frosting with flour and granulated sugar, but it is really, really wonderful! It’s significantly less sweet than a traditional buttercream made with powdered sugar, but it is also super creamy and soft.

You can use it on any cake or cupcakes, though it goes particularly well with chocolate cake or this best red velvet cake. I like it for Black Forest cake because it lets the sweetness of the cherries and the richness of the chocolate cake shine without overpowering them like so many cloyingly sweet buttercream frostings might do.

When possible, I like to make this cake a day in advance because I always think it is better the second day once the cherry filling has had a chance to really soak into the chocolate cake, similar to how the kirschwasser is used to moisten and flavor the chocolate sponge of the Schwarzwälder Kirschtorte.

You could maybe get away with only one can of cherry pie filling, but I always use two because I love, love, love the extra cherries and having plenty to pile on top.

I hope you love my Aunt Becky’s Black Forest Cake as much as I do. Do you have a go-to birthday cake that you make each year? I would love to hear about it in the comments below! 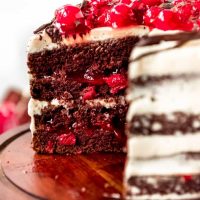 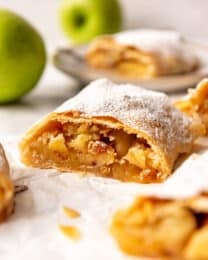 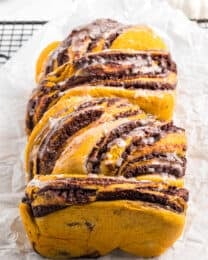