This Chicken Tikka Masala Pizza is a fusion of two takeout favorites. The rich, spiced sauce and tender meat of the chicken tikka masala top a thin, chewy crust and gets covered with melty mozzarella, red onions, and cilantro in this best-of-both-worlds pizza!

It's the weekend and that means...PIZZA! AmIright?! And it has been a while since I posted about my Four Cheese Pizza with Tomato Basil Arugula Salad. High time for another pizza recipe on here!

I love all traditional pizzas, don't get me wrong, but this Chicken Tikka Masala Pizza rocks my world. I mean, one of my favorite parts of eating chicken tikka masala is scraping around my plate with a piece of naan to wipe up every last drop of the rich, creamy sauce, so it only made sense to put that sauce and the tender, spiced chicken on a pizza crust and then top it with some red onions, chopped cilantro and melty mozzarella cheese.

It's sort of inspired by CPK's bbq chicken pizza except with an Indian food takeout twist. And you will never find this pizza on the menu at your local pizzeria.

Whenever I make a batch of my favorite Bombay House style chicken tikka masala, I double it just so I can make this pizza from the leftovers later in the week. Then it's just a matter of making the pizza dough, chopping onions and cilantro, and assembly.

You could even take a semi-homemade approach and buy a jar of tikka masala sauce and frozen pizza dough at the store and then just put it all together at home if you feel intimidated by making your own pizza crust. But really, pizza crust is quick and easy to make - you should try it if you never have before!

I feel like the melted cheese helps tone down the spiciness of the tikka masala sauce, so keep that in mind when judging the level of spice you like in your pizza. And the cilantro and red onions add such freshness and amazing flavor that sort of brings it all together.

I grilled this particular pizza because I love the slightly charred crust, but you can bake it in the oven if you prefer, especially once the weather starts cooling and you might not want to be outside grilling as much. 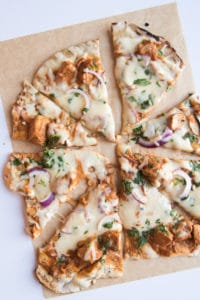 You can buy premade chicken tikka masala at Costco or many grocery stores, or even just order it from your favorite Indian restaurant, if you don't feel inclined to make a batch of it on your own.  But it is absolutely worth it to make your own from scratch using this recipe for Bombay House style chicken tikka masala.  You can even make extra and freeze some of it to have on hand for whenever pizza cravings strike. 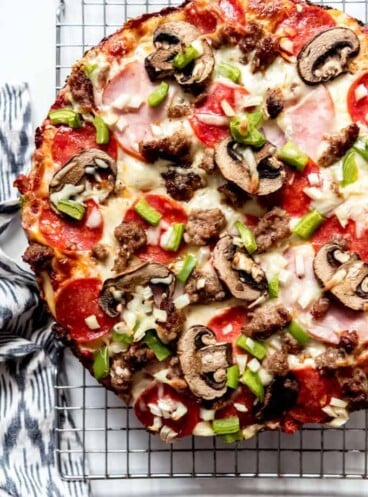 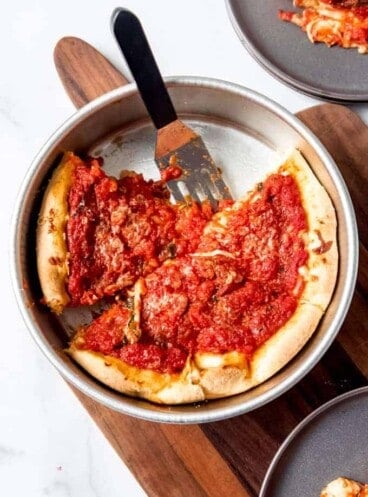 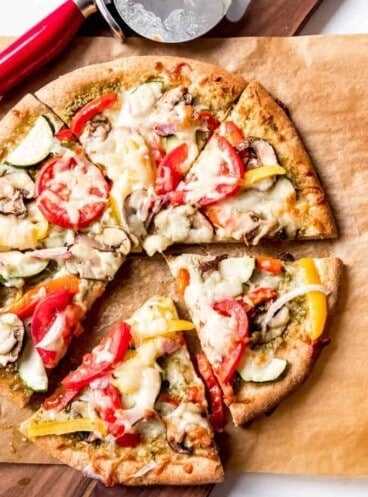