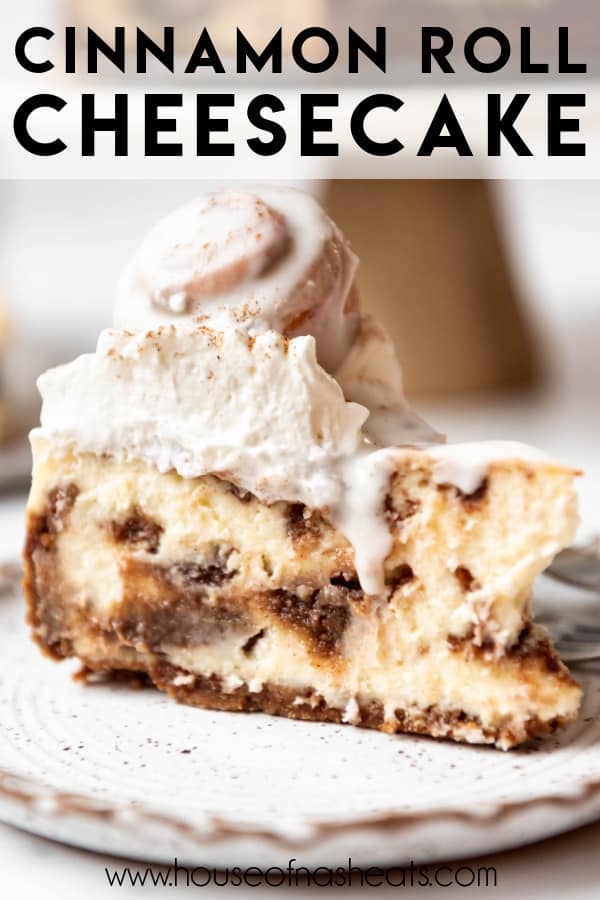 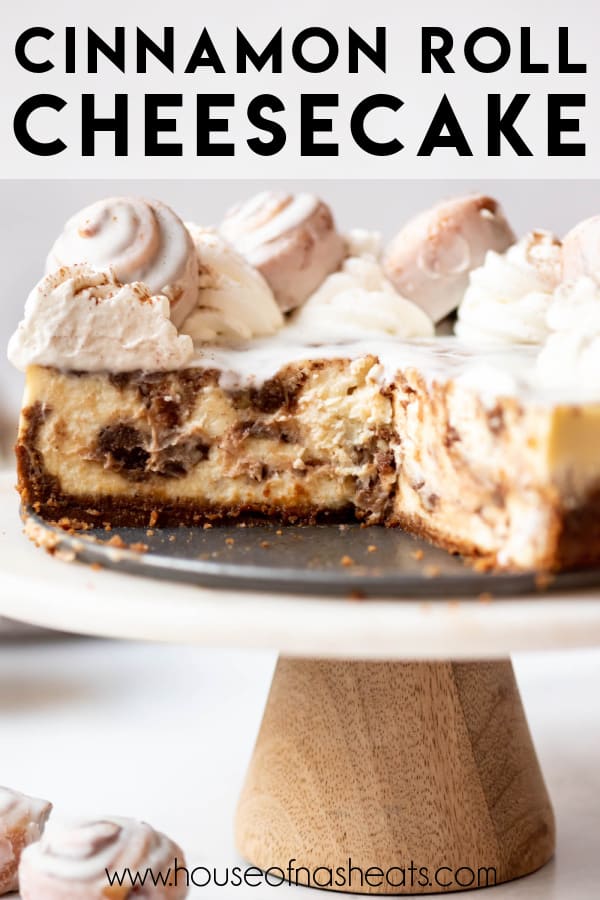 This Cinnamon Roll Cheesecake is creamy, easy, and loaded with swirls of brown sugar and cinnamon filling in a smooth cheesecake base with a Biscoff cookie crust. It's definitely a crowd-pleaser!

If a batch of cinnamon rolls and a classic cheesecake had a baby, this is what you would get. It's got all the classic cinnamon roll flavor in a creamy, dreamy slice of cheesecake. The simple glaze on top is the perfect finish!

We went to Disneyland during the holidays not too long ago and they had mini cinnamon roll cheesecakes at the Jolly Holiday Bakery & Cafe on Main Street. I immediately fell in love and decided to come home and recreate a full-size version for the blog, along with their raspberry rose macarons and the churro toffee that are my other favorite Disney treats.

How to Make a Cinnamon Roll Cheesecake

There are a few elements that go into making this cinnamon roll cheesecake recipe, but they are actually all easy to make and come together quickly. The longest part is baking and cooling the cheesecake slowly to prevent it from cracking or sinking.

Don't overmix the cheesecake filling once you start adding the eggs. It adds air to the dense filling, which can lead to cracks in the finished cheesecake.

How to Make an Easy Cheesecake Water Bath

I found using a water bath for cheesecake to be intimidating and problematic for years until I discovered this easy approach. You just need a 10-inch round cake pan, a 12-inch pan, and some boiling water to make it work.

First, nestle your cheesecake in the 9-inch springform pan into a 10-inch cake pan.

Then nestle the 10-inch pan into the larger 12-inch pan. Heat your water to boiling on the microwave or stovetop, then carefully pour it into the outside ring of the 12-inch pan until it fills the pan about halfway up the sides.

I like this method because you don't need to worry about wrapping the springform pan with aluminum foil or using an oven bag to protect it from leaks.

Cheesecake freezes really well for up to 2 months! You can freeze the whole thing and thaw it later if you are thinking ahead and baking for the holidays. Or freeze just a slice or two for easier thawing and enjoying any time the craving for a slice of cheesecake hits you!

I recommend freezing individual slices on a baking sheet or plate for 3-4 hours until firm, then wrapping them tightly in plastic wrap and transferring to an airtight container or resealable freezer-safe bag for longer term storage.

Do I have to use a water bath for cheesecake?

No, definitely not! You can bake almost any cheesecake recipe without a water bath and they are mostly going to turn out really well. The main reasons I recommend using a water bath when baking cheesecake, is for a more even bake and creamy texture, a level top that doesn't sink or crack as easily, and less browning on top. That doesn't mean that a cheesecake made without a water bath is bad, it's just that you might run into some of those issues. It will still taste delicious though!

How long can cheesecake sit out?

I don't recommend leaving cheesecake out for longer than 2 hours at room temperature. Also, keep in mind that if you decorated it with whipped cream that will start to melt sooner too so if you are going to let it sit out you might want to wait to decorate until shortly before serving.

How do I know when my cheesecake is done?

You can tell a cheesecake is done when you jiggle the pan. The outside edges might be set, but the center should still wiggle quite a bit. If the whole thing seems way too loose and jiggly, then try giving the cheesecake another 10 minutes before checking again.

How to Store Cheesecake

This cheesecake will keep for 5-7 days in the fridge, although the whipped cream might deflate over time. Keep it loosely covered with a piece of plastic wrap. 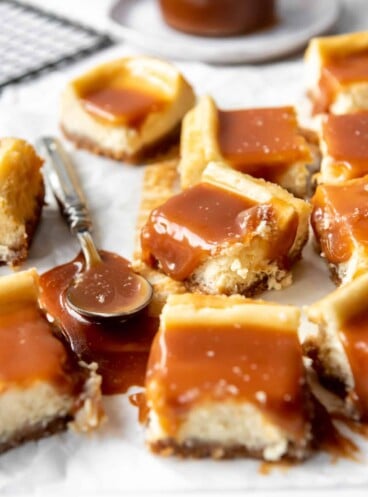 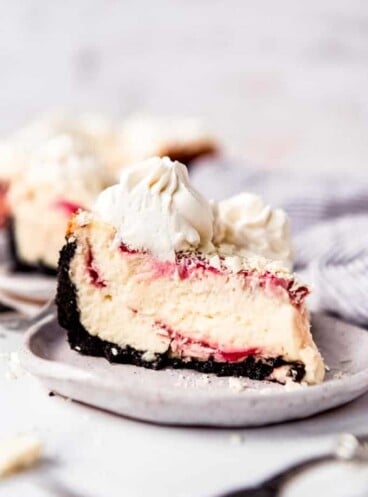 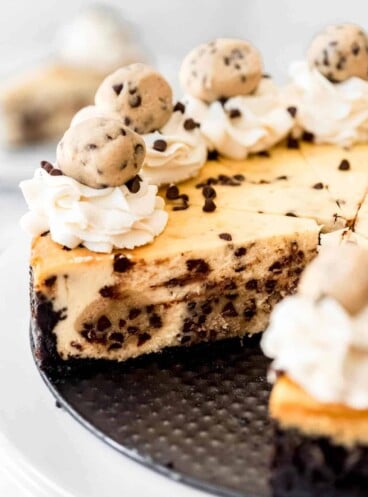 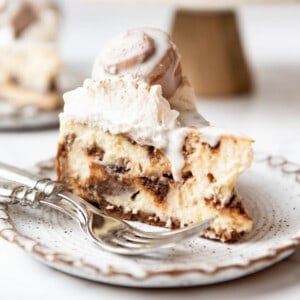 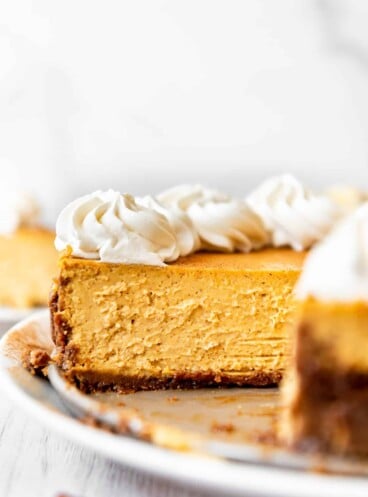 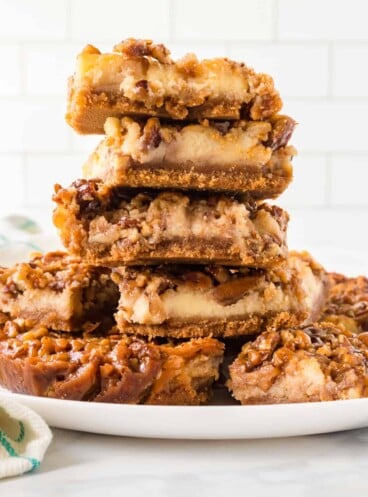