Coca-Cola Jello Salad is a jiggly, fruity treat studded with chopped tart cherries and crushed pineapple, with a bit of kick from the Coca-Cola. It's especially fun made in a jello mold!

When I was researching foods that Georgia is known for as part of my American Eats series, Coca-Cola was one of the top results. The Coca-Cola Company was founded in Atlanta, Georgia in 1892 after all!

I contemplated making coke cake or even glazing our Easter ham with a coca-cola pineapple glaze. But then Cooking Bride posted her coca-cola jello salad on Instagram.

And a few days later when we happened to be in Georgia visiting my college roommate, I picked up one of those paperback cookbooks with plastic comb binding titled "Georgia Cooking" with a collection of local favorite recipes and I was immediately drawn to a recipe for coca-cola jello salad.

Clearly, I was meant to share this coca-cola jello salad with you.

I'm a big fan of jello. We don't eat it all the time, but every now and then, especially around the holidays or during the summer, it makes such a tasty treat.

And calling it a salad means you can serve it as a side dish right alongside your meatloaf or ham or ribs or whatever. I find that we love pairing sweet-tart jellos with salty, meaty main dishes best of all.

How to Make Coca-Cola Jello Salad

We've all made jello before, right? There's not much to it.

First you boil water, cherry pie filling, and sugar until the sugar is dissolved. Then you stir in two 3-ounce packages of cherry jello. Let this cool on the counter for 30-45 minutes.

Once the gelatin mixture has cooled some, stir in the coca-cola and crushed pineapple, then pour into a jello mold (<-- affiliate link) or serving bowl.

I lightly spray my jello mold with cooking spray, just to help the jello release more easily when it's done setting. Dipping the mold into a pan of hot water for a few seconds helps too.

If you try to rush things and add the pineapple before the jello has had time to cool down a bit, the fruit will float to the top of the jello rather than stay suspended throughout the jello. It still tastes good, it just looks a little different and you might get some bites of jello without fruit in it.

Chill completely in the fridge until set.

You can top the jello with sweetened whipped cream if you like, but I actually prefer this coca-cola jello salad plain. 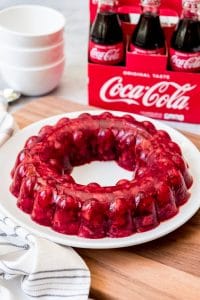 1 can of drained cherries or 1 ½ cups chopped fresh cherries can be used in place of the cherry pie filling.  Recipe adapted from The Cooking Bride.