This Greek Baklava recipe has walnuts and cinnamon layered between flaky phyllo dough brushed with melted butter then baked and drizzled with a sugar and honey syrup to create a crispy, sweet, and impressive dessert!

You kind of have to love nuts to love baklava. If you do, you might also love these Pistachio Macarons, Quick and Easy Candied Walnuts, and Burnt Almond Cupcakes.

Years ago a friend mentioned to me that one of her favorite Christmas traditions was making homemade baklava. Ever since then I have wanted to try it myself, and this year I finally did. And now I'm wondering what took me so long!

Although there are a few steps to assembling the baklava, none of it is difficult! And it only takes trying it once to realize just how easy it is to make truly fantastic baklava at home!

I'm a HUGE baklava fan. I mean, nuts and honey and flaky pastry? But I can't remember ever trying it until we went to Greece and Turkey after graduating law school.

Ever since then it has been one of my favorite treats that I tend to have cravings for.

Some people crave donuts or cupcakes. I crave baklava.

Greek food just wasn't something my family did when I was growing up mostly in Nebraska and southern California. My only experience with it was some vague notion that it was mentioned by Genie in the Disney movie "Aladdin".

It turns out there are many variations of baklava, depending on where it is from in the Mediterranean or Middle-East. Some baklava is sweeter, some more heavily spiced with cloves and cardamom in addition to the cinnamon or perfumed with orange blossom or rose water, and the nut-filling used in baklava is different from country-to-country.

The way baklava is assembled or even sliced also gives clues to its origins with diamonds, triangles, rectangles, and squares being the most common shapes, although I have also seen circles, cups, and "cigars" - little rolled up tubes of baklava.

I'm certainly no expert, but I can google and I did quite a bit of research when I was trying to decide what kind of baklava to make.

Differences between Greek, Turkish, and other Middle-Eastern Baklava

There seems to be a dispute about who really invented modern baklava, with the Greeks and the Turks making the strongest claims. Supposedly, baklava was a favorite of the Sultan at Topkapi Palace in Istanbul.

But it was the Greeks who invented the phyllo (or filo) dough that is used in baklava today. But many other countries like Lebanon, Iran from the Middle-East, and even Hungary in Europe have baklava traditions that stretch bake centuries.

Greek baklava appears to predominantly use walnuts as the nut of choice for the filling, with honey being another major player in their baklava recipes.

Pistachios or a mix of pistachios and almonds are more often associated with countries like Turkey, Iran, Lebanon, and Azerbaijan. And supposedly there are strong feelings held by many Turks that honey doesn't belong in baklava. I also have a Turkish baklava recipe, if you want to try it and see the difference for yourself!

Less traditional baklava like that found in Hungary uses an apricot filling. I even saw some baklava recipes calling for chocolate chips, which I knew wasn't what I wanted to make for my first attempt at baklava.

I knew that I wanted to go with a Greek approach since my favorite baklava always has a strong honey flavor to it, even though I also really love pistachio baklava.

I found an easy and straightforward-looking recipe on another blog I love called Natasha's Kitchen. I've made a few of her recipes before and they have turned out well. Plus, her approach looked simple enough.

While she doesn't describe her version as Greek baklava, the walnut and cinnamon filling with a honey syrup and diamond-shaped baklava slices all seemed to indicate a Greek origin to me.

And oh my goodness, this baklava did not disappoint! It makes a huge pan that is great for sharing.

The flavor was absolutely incredible with just the right balance of sweetness and warmth and butteriness from all the honey, cinnamon, butter, and walnuts, with that little bit of lemon juice to offset the other flavors.

Plus, it was so much easier than I thought it would be! I can't believe it took me so long to try making baklava at home!

Yes, the instructions might look intimidating and long, but really, it's just making a super simple and quick syrup, then layering a package of thawed phyllo dough with butter and chopped nuts, then baking it!

The biggest issue I had was a lack of information on actually working with phyllo dough. Specifically, I didn't realize that while most frozen phyllo dough is sold in 16 ounce packages, some include only 1 large roll of phyllo dough with 18-20 sheets while others contain 2 smaller rolls totaling 40 sheets.

It's not a big deal though. If you buy the larger sheets, just cut them in half and you are good to go.

The important thing is knowing that you are going to need 36-40 sheets of dough that is trimmed to the size of a 9x13-inch baking dish.

I also found that despite keeping a damp towel over my phyllo dough, some of it still seemed to want to crack and tear. It's super thin stuff and I ended up sort of piecing together a few layers of my baklava with broken and torn scraps of dough, hoping it would turn out okay. And it totally did.

So if you feel like you are struggling, don't get frustrated. By the time everything gets layered together, baked, then drenched in syrup, nobody is going to have a clue about less than perfect sheets of dough with wrinkles or tears or whatever.

Finally, be sure that you make the syrup BEFORE baking the baklava so that it has plenty of time to cool completely prior to the baked baklava coming out of the oven.

It's important to pour cooled syrup over hot baklava, otherwise it won't be absorbed properly and you will end up with soggy baklava, which is not what you want.

I really, sincerely hope you feel the same way about baklava as I do. Or if you haven't had it before, that you give it a try! 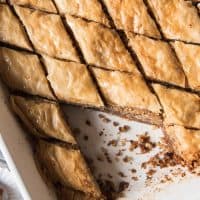