Beef Steak Pie is a wonderful, mostly forgotten old recipe that needs to be brought back to life! It is a rich, meaty steak and mushroom pie recipe that gives you a taste of history and is super comforting for cold weather days!

If you like this beef steak pie, I'm sure you will also love my Homemade Chicken Pot Pie Recipe, Beef Wellington, or Roast Beef Sliders!

This Beef Steak Pie was inspired by an old recipe published in a cookbook from 1747 and is a dish that, near as I can tell, would likely have been served by the townspeople of Salem, Massachusetts during the Salem Witch Trials a half a century earlier.

It's my first post in a series I'm starting with another food blogging friend that we are calling, "Historically Hungry - Old Recipes Made New", where we will showcase historical recipes that we feel deserve a modern-day resurgence in popularity!

Back in May, I attended a food blogging conference where I met Jenni, of The Gingered Whisk. We had actually been part of a small blogging group for almost a year before that, but it was so fun meeting in person and hanging out! She's super fun and interesting and we have many similar interests (um, food, of course, but also books, travel and exploring new cuisines, and raising girls the same ages).

Afterwards we started brainstorming a project we could do together and came up with the idea of researching and posting about foods from different periods of history. I actually love food history and think it's really fascinating, and I'm hoping that maybe some of you, my readers, do too!

There are other food history blogs, and even a show on PBS, that deal with culinary history in much greater depth than I plan to ever go into here in the Historically Hungry series.

But I find it a really interesting, fun topic to learn about and thought it would be a great project to recreate some old recipes on here every now and then with versions that are as true to the original as possible while also being adapted to a modern kitchen and modern tastes.

Our plan is to each share a historical recipe around a different time period or historical theme at least every other month. And since it is October (Friday the 13th even!) and Halloween is coming up, we figured why not start off with recipes that hearken back to the time of the Salem Witch Trials in the late 1600's in America.

I am giving you a main course with this super savory and delicious Beef Steak Pie, and Jenni is taking care of dessert with a classic American 17th Century Gingerbread cake recipe, also adapted from "The Art of Cookery Made Plain and Easy" by Hannah Glasse, published in 1747 and another recent cookbook exploring historical desserts called American Cake.

A Beef Steak Pie definitely isn't exclusive to Salem or the 17th century. Stewing meat is actually an ancient cooking technique, and a wikipedia article on meat pie says that it was the ancient Greeks who first filled something resembling a pastry crust with meat.

That dish eventually made it's way to northern Europe where they were referred to as "coffins" (even more appropriate for Halloween, right?). The name "pie" became popularized in Medieval times, possibly because of the popularity of using magpies (which were originally just called "pies") as the meat filling inside the pastry crust.

The Pilgrims brought the recipes for meat pies with them across the ocean when they came to the North American continent. While there are lots of meat pie variations depending on what meat you want to put into your pie, the idea of a Beef Steak Pie really appealed to me.

Steak pies like this are still popular today in Scotland during Hogmanay, which is their celebration of the New Year and the Scottish steak pie recipes I found online are pretty much just like the one I'm sharing here.

To give you a quick background on Hannah Glasse, the author of "The Art of Cookery Made Plain and Easy" and the source of my inspiration recipe, she has been referred to as "the mother of the modern dinner party" or "the first domestic goddess" and I'm going to call her the original food blogger too.

She said in her cookbook's introduction, "I believe I have attempted a Branch of Cookery which Nobody has yet thought worth their while to write upon ...", that being creating a cookbook for the new middle class that was developing as people migrated to cities.

From what I learned from Google, most cookbooks at the time were written by fancy chefs to teach other fancy chefs who cooked for the wealthy upper class. Hannah (who was almost the same age as I am right now), decided to publish a collection of recipes with easy to understand (for the time) instructions that would help regular people who couldn't afford a kitchen staff, to prepare food for their own families that they would enjoy and be able to serve to guests with pride (sounds like the theme of my blog, right?!).

It's actually a super fascinating read that I checked out from the library when researching what I wanted to post for my Salem Witch Trial contribution to the Historically Hungry series, and if you are interested, I highly recommend getting your hands on a copy and perusing some of her other dishes!

But as you will see, Ms. Glasse's original recipe for Beef Steak Pie needed some interpretation and adaptation to give it new life. Here is her version under the section, "Of Pies" in "The Art of Cookery":

Yeah, whole steaks seasoned with salt and pepper, then cooked in a pie dish with water and a crust didn't seem quite like a complete recipe to me, even though the idea of a steak pie sounded good in my head. And what in the world is suet?

So I took some pretty substantial liberties in the spirit of imagining what a housewife in Salem might have added to her meat pie, especially if she had a garden that provided her with carrots, celery, onions, and garlic. I also figured that if she happened to have (allegedly) dabbled in witchcraft, she might foraged some mushrooms or herbs and would have tossed those in as well.

I dunno, maybe I'm imagining too much? Makes sense to me though. I also decided to just go with my standard butter & shortening pie crust after learning that suet is the fat found around the kidney and other organs in animals. That ingredient got nixed immediately, but I found that chilled vegetable shortening is a decent, if imperfect, substitute. Although apparently suet is still used in British cooking today!

A frozen puff pastry crust would also have been a good (and even easier) option, except that Ms. Glasse specified using a puff pastry in other pie recipes of hers and included her puff pastry recipe next to her "good Crust for great Pies" recipe. But if you decide to use a puff pastry, I'm positive it will turn out delicious.

This Beef Steak pie is honestly so, so wonderful and homey and delicious. The chuck steak is cut into chunks, seared, and then cooked slowly with vegetables in a savory gravy made with beef broth thickened with flour and seasoned with some of my favorite herbs.

The long, slow cooking process could easily be accomplished in the slow cooker, if you want to go that route, but it breaks down the tissues in the inexpensive cut of beef to make it wonderfully tender.

And while delicious on it's own, the beef stew is just incredibly wonderful baked under a classic, buttery, flaky pie crust. It puts any sad, soggy pot pie you had growing up to shame and reinstates this classic dish to its former glory.

It's a bit of a labor of love to make, but it's completely worth it and most of the cooking is passive time, so please don't let that deter you. And you could easily make 2 pies at the same time and freeze one for and easy meal on another night!

Also, you definitely need to check out The Gingered Whisk's Colonial Gingerbread Cake Recipe as a wonderful, authentic dessert to go with this dinner and complete the meal! 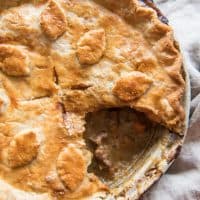 You can use dried porcini mushrooms, button mushrooms, morels or oysters, depending on what is available to you.   Optional:  You could replace 1 cup of the beef broth with 1 cup of red wine for a richer flavor.