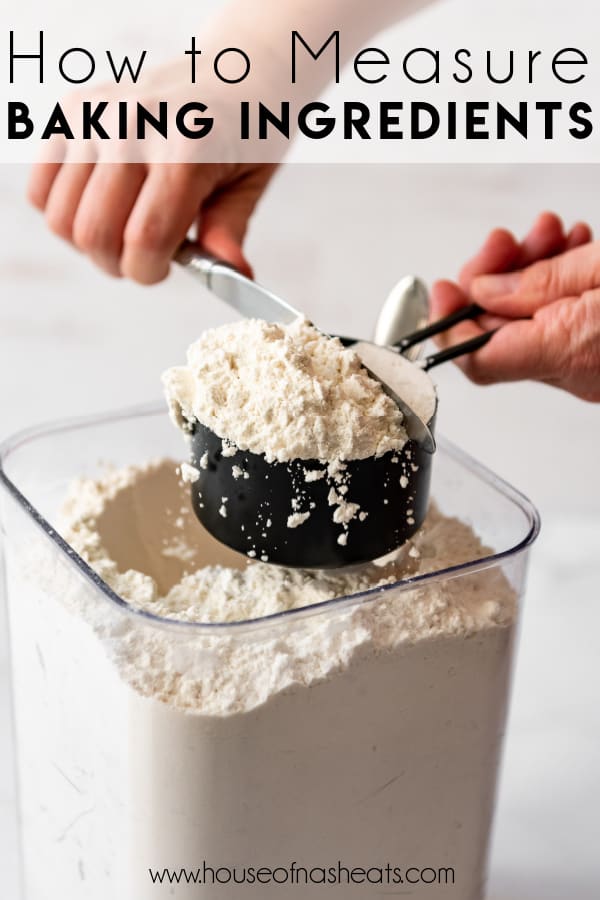 Learn how to measure flour, sugar, mix-ins, and other common baking ingredients accurately and become a better baker in no time. Stop worrying about kitchen fails and start having fun baking with consistent results every time!

It might seem straightforward, but it's surprising how many times the reason a cake turns out dry or a cookie dough is crumbly or a bread is too dense is because of inaccurate measuring techniques.

This post is meant to be a helpful reference guide with in-depth information to anyone who is new to baking, wanting to become a better baker, or who has struggled with inconsistent results when making recipes.

Why is it Important?

Accurate measuring of both liquid and dry ingredients can make or break a recipe since so much of baking is literally a science. Most baked goods involve chemical reactions and changing a variable like the amount of flour can throw off the results turning soft cookies into rocks or a moist cake into something dry and dense.

Whether you choose to measure in cups using the "spoon & sweep" method or decide to start using a kitchen scale to measure by weight, these are my best tips & tricks for measuring ingredients properly so you can always have delicious bakes!

How to Measure Flour in Cups

Most of the dessert recipes on my site use more flour than any other ingredient, so it's pretty important to get this measurement right. That's doesn't just mean not losing count and accidentally adding an extra cup of flour (been there, done that).

The spoon & sweep method is the simplest way to measure flour or other dry ingredients without a kitchen scale. It's not quite as precise as measuring by weight, but it's pretty nearly accurate most of the time if done properly.

Step 3: Level off with a straight edge tool. Use the straight edge of a knife or bench scraper to scrape off excess flour back into the flour container. As you can see, using this approach I ended up with 122 grams of flour, which is right between the commonly accepted standard of weighing flour between 120 to 125 grams per cup.

The other method which is frequently used by many home bakers is the scoop & sweep method. I think of this as the American way where you just dip the measuring cup into the flour, scoop up enough flour to fill the cup, then level it off.

If I had to guess, I would say this is how the vast majority of most home bakers measure their flour. And it's not wrong! But you will end up with more flour by grams using this approach than the spoon & sweep method. I repeated this step more than a dozen times, weighing the flour amounts each time and got pretty consistent results averaging 141 grams of flour per cup. This is roughly 12% more flour than using the spoon & sweep method and you can see how the difference will compound if making a recipe calling for multiple cups of flour.

How to use a food scale to weigh flour

If you want to skip the measuring cups altogether, you could save yourself dirtying some extra dishes and ensure accuracy every time by simply investing in a good kitchen scale.

Start by placing any bowl or measuring cup on a scale and hitting the "tare" or "zero" button to zero it out. That way the scale won't take the weight of the bowl into account when measuring the weight of the flour. Spoon flour into the bowl on the kitchen scale until you reach 120 to 125 grams (for regular all-purpose flour). If you go over, just take a little bit out. Easy-peasy!

Do a little mental math or grab a calculator to adjust the needed weight amount for any recipe and you'll be good to go.

I picked up my scale at Williams Sonoma but you can get a good inexpensive one just about anywhere, including Amazon of course. I happen to really love mine because of it's completely smooth top so I don't have pesky cracks or ridges to clean when it gets dirty. It's also thin and streamlined so it takes up very little space in a drawer.

Which method should you use?

If you are struggling to know which method to use between spoon & sweep, scoop & sweep, or weighing, the best answer is to follow what the recipe says if it specifies one of the approaches. Weight will always be most consistent, so if grams are given, use those if you have a scale.

If you don't have a scale, but the recipes says spoon & sweep or scoop & sweep, follow the method described above.

If nothing is specified, you will need to make a judgment call. In my experience, most cookie recipes use a scoop & level approach while most cake recipes use a scoop & level approach. Should this all be standardized so it's less confusing? Yes, most definitely. For now, I'm updating all of my older recipes to specify the method used while including weights in grams to help readers get more consistent results and clear up confusion to the extent possible.

How much does a cup of flour weigh?

I feel like I researched every cookbook and website to figure out a universally accepted standard for how much 1 cup of regular all-purpose flour weighs. King Arthur's Flour says 120 grams while other sources say it's 125 grams. Some reference material indicates it could depend on the brand of flour you purchase, while others say 1 cup of flour weighs 141 grams (which is true...if you are using the scoop & level method).

How to Measure Sugar

Brown Sugar: Most recipes call for brown sugar to be packed into the measuring cup. Press it against the side of the storage container to compact the brown sugar. It should mostly hold its shape for a few seconds after you dump it out. If you don't have brown sugar on hand, you can make homemade brown sugar easily with granulated sugar and molasses!

Powdered Sugar: When measuring powdered sugar (also known as confectioners' sugar or icing sugar), use the same spoon & level approach as flour. If your powdered sugar is lumpy, you may want to whisk or fluff it first as well. It's usually not necessary to sift the powdered sugar unless a recipe specifically calls for it.

If using sticky ingredients like honey, molasses, sweetened condensed milk, or corn syrup, you might want to spray the measuring cup with cooking spray first to help them slide right out.

Sour cream, peanut butter, applesauce, pumpkin, greek yogurt, mashed bananas, etc. in dry measuring cups so you can level them off. Spoon it in, but be sure to press down around the sides a few times to make sure there aren't air pockets, which could actually cause you to undermeasure and have less than you needed.

Most butter comes prepackaged with marking lines to indicate where to cut for the amount called for in your recipe. 1 stick of butter = ½ cup (8 tablespoons) or 115 grams.

I like to buy shortening in sticks as well for the same reason. It's so easy and I don't have to bother with measuring cups. If you buy large containers of shortening though, measure it just like a semi-liquid ingredient by spooning and pressing it into a measuring cup and leveling off the top.

How to use Measuring Spoons

If you are measuring baking powder, baking soda, cornstarch, spices or other dry ingredients in smaller quantities using measuring spoons, you can dip the spoon into the container and use a straight edge to level off the top.

This is another ingredient that calls for the spoon & level method for accurate measuring. It can also clump up, so it's a good idea to fluff it first with a spoon before transferring it to your measuring cup.

If you enjoy making homemade bread, you might consider buying yeast in bulk and storing it in the fridge or freezer rather than buying individual packets of yeast. I typically buy active-dry yeast, which needs to be proofed in warm water with a little sugar before using, but you can also purchase instant yeast for quicker results.

A standard packet of yeast is 2 ¼ teaspoons or .25 ounces. Measure it just like you would measure baking powder or baking soda buy scooping and leveling it off.

Things like chocolate chips, nuts, cereal, sprinkles, and seeds don't have to measured quite as precisely. In fact, some people (my husband is among them) intentionally over-measure things like chocolate chips based on personal preference. In most cases, this shouldn't impact the integrity of a recipe unless the chocolate is being melted and added to the recipe, in which case it's more important to measure accurately.

Treat mix-ins much like you would measuring flour by spooning and leveling the ingredients into your measuring cups.

Fruit is typically measured by weight rather than volume. Berries usually come in 8 or 12-ounce containers and will usually be marked as such. But if a recipe calls for fruit to be measured by cups, it will typically say so. You may need to chop or slice the fruit first to measure accurately.

These are some of the most commonly used ingredients in recipes you will find on my site. I found I looked up each of these enough times that I was making myself a sticky note to always have them on hand so it might be worthwhile for you to have them here as well. Plus, now I can throw away my sticky notes.

For many more frequently used ingredients, I often reference this conversion chart from King Arthur Flour. 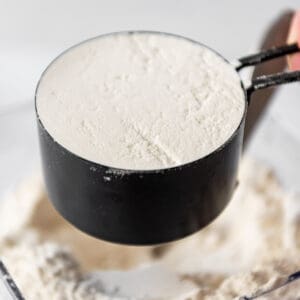 How to Measure Flour