Arkansas Possum Pie is a creamy, layered chocolate and cream cheese pie in a pecan shortbread crust that is sure to please!

I just had to include this hilariously named Arkansas favorite as part of my American Eats series. Not only is it incredibly popular and found all over the state of Arkansas, but my curiosity was immediately piqued by the name possum pie.

As soon as I saw this on a list of popular Arkansas recipes I was simultaneously repulsed and intrigued. Did it really have possum in it? Do people really eat roadkill in the South?

Truthfully, I was both relieved and a little disappointed to find out that possum pie is NOT a savory meat pie made with actual possum after all, but rather a delicious dessert recipe with a sandy pecan shortbread crust and layers of cream cheese, chocolate pudding, and sweetened whipped cream.

One theory behind the unusual and shocking name is that possum pie is so-named for pretending to be something that it's not - in this case hiding the chocolate filling underneath a layer of whipped cream.

Another theory is that it's just called possum pie because of it's similar coloring to the only marsupial in North America. Possum pie is sometimes called by other names as well, like Chocolate Layer Pie, Chocolate Lush, or Four Layer Delight.

No matter what you call it, it's a delicious dessert for anybody who loves chocolate cream pies! And really, I think my favorite part might be the pecan shortbread crust that tastes more like a pecan sandies cookie than a pie crust.

How to Make Arkansas Possum Pie

Almost every recipe I found for possum pie called for boxed chocolate pudding mixes and Cool Whip topping. So I thought I would share a version of possum pie that is made from scratch, since homemade tastes so much better and making pudding from scratch really isn't hard at all! 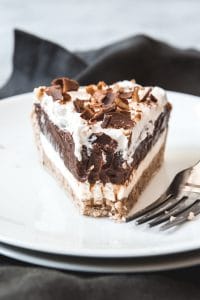