This easy, Cheesy Taco Soup is a completely satisfying, full-flavored soup that is made in one pot in under 30 minutes, then garnished with all your favorite taco fixins'!

We love a big ol' pot of soup when the weather turns cold! Other reader favorites include Zuppa Toscana, The Best Loaded Baked Potato Soup, and Homemade Tomato Basil Soup.

There is nothing like a good bowl of soup to warm you up on chilly days, and this Cheesy Taco Soup is loaded with wonderful flavors and textures that make it one of our go-to meals during the cooler months of the year. Plus, I can have it ready in less than 30 minutes, with minimal fuss, which is a huge help on busy, blustery days.

I have made plenty of taco soup recipes in the past, including the 7 can version where you basically just dump a bunch of canned stuff into a pot along with a packet of taco seasoning and heat it all up. But none of them hold a candle to this thick, cheesy taco soup that is hardly any more work!

I remember when my oldest daughter, who is 6 ½ now, wouldn't eat soup no matter what kind I offered to her. Which really bummed me out, because I'm a big soup fan and I love to eat it all fall and winter long!

But she has come around and now she loves soup just as much as I do, I think. Potato Corn Chowder, Homemade Chicken Noodle & Dumpling, Zuppa Toscana, and especially this easy, Cheesy Taco Soup are her favorites!

One thing that I think is really important to note when making cheesy soups is that you really need to use freshly grated cheese, rather than the pre-grated stuff that you can buy at the store.

Pre-grated cheese is coated with a powder to prevent it from clumping and sticking, and it doesn't melt into the soup nearly as well as when you grate the cheese off the block.

I debated calling this cheesy enchilada soup or beef enchilada soup instead of cheesy taco soup, mostly because the recipe calls for a 10 oz. can of red enchilada sauce. But ultimately I decided that one of the bigger factors for me in enchiladas are the tortillas, which this soup does not have.

And I actually have a favorite chicken enchilada soup that has corn tortillas in it that I will share with you at some point too, so cheesy taco soup it is!

I typically use whatever brand of enchilada sauce I find at the store, and sometimes can only find the large cans, in which case I use half of it and refrigerate or freeze the other half for future use.

One of these days I’ll get around to sharing an recipe for homemade enchilada sauce, which isn't hard to make at home, but sometimes I don't want to mess around making an ingredient to go into another recipe, and using store-bought enchilada sauce just speeds up the process and makes it so I can get this cheesy taco soup on the table in under 30 minutes, which I love.

Possible toppings for your cheesy taco soup include:

Or you can just eat it plain, which is entirely delicious too, although I really think adding some of the fresh ingredients like the diced tomatoes and onions are a great idea to balance out the cheesiness of the soup and add texture as well as flavor. 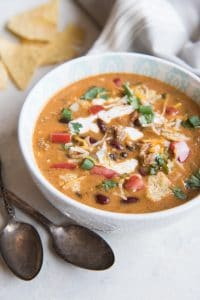 5 from 14 votes
Amy Nash
Prep Time 5 mins
Cook Time 25 mins
Total Time 30 mins
Course Soup
Cuisine Mexican
Servings 6 servings
This easy, Cheesy Taco Soup is a completely satisfying, full-flavored soup that is made in one pot in under 30 minutes, then garnished with all your favorite taco fixins'!  It's loaded with wonderful flavors and textures that make it one of our go-to meals during the cooler months.  Plus, I can have it ready in under 30 minutes, with minimal fuss, which is a huge help on busy, blustery days.

You could also make this in the slow cooker by first browning the meat and onions, then adding them to the slow cooker with all the remaining ingredients except for the cream cheese and the Pepper Jack and cheddar cheeses.  Cook on high heat for 3-4 hours, or on low for 6-8 hours, then stir in the cream cheese and other cheeses until melted as described in the recipe above before serving. Adapted from Carlsbad Cravings. 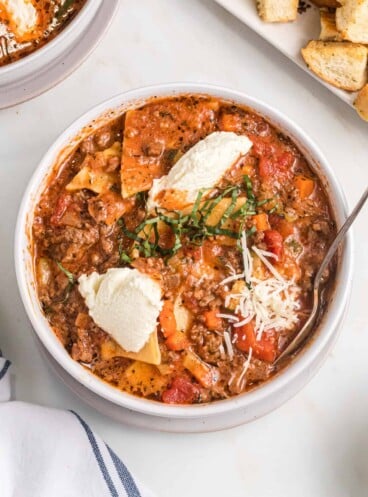 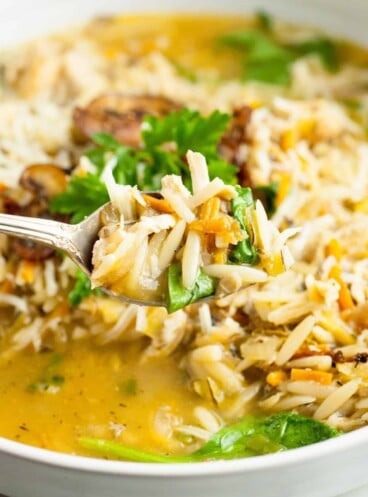