Fresh Peach Cobbler just may be the ultimate summer dessert comfort food. It's simple, easy and a timeless classic with a buttery cobbler topping, fresh juicy peaches, and hints of cinnamon in a rich, sweet syrup. This fresh peach cobbler is the best I have ever eaten. It has a perfectly wonderful crust that is crisp on top but is also soft and moist and chewy thanks to the juicy peaches bubbling below it.

Obviously we're big on peaches at our house. They are my favorite fruit and some of our other favorite peach recipes are Southern Peach Pie, Old-Fashioned Fresh Peach Ice Cream, and Raspberry Peach Italian Cream Sodas.

I love anything that is a crumble, cobbler, crisp or pie. One of the first recipes ever posted on House of Nash Eats was a delectable Blackberry Nectarine Crumble (which is also wonderful with peaches in place of nectarines).

But as of yet, no cobblers! That changes today with this Fresh Peach Cobbler that is the epitome of summer dessert (okay, possibly tied with Strawberry Shortcake).

Now, before anybody gets up in arms, I'm making any claims about this being an authentic Southern peach cobbler. I'm not from Georgia and I can't say whether this is authentic or not.

I've seen recipes for "Southern" peach cobbler that are basically peach pies with only the top crust, and others that involve pouring a cake batter made with self-rising flour over melted butter, then spooning syrupy cooked peaches over the top of that where the batter rises up to the top as it bakes.

Still other versions of quote-unquote traditional "Southern" peach cobblers have a topping that is more biscuit-like.

I don't know that anyone can really say what a traditional Southern peach cobbler may be with much authority and it honestly might depend on what part of the South you were raised in!

One thing I DO know is that when making a classic, Southern peach cobbler, it's important that it tastes like perfectly ripe summer peaches. The kind where if you eat them out of hand the juice drips pink and sticky down your wrists.

You don't want to overload your cobbler with spices or thicken the peach filling too much! Cobbler is supposed to be juicy and more syrupy than a pie since there's no bottom crust in a cobbler that you need to worry about cooking through and becoming soggy.

And while, technically, you could make this peach cobbler with canned peaches or frozen peaches, just...don't. It's called FRESH Peach Cobbler for a reason and it's one of those dishes that just don't taste nearly as good with out-of-season or canned or frozen ingredients.

Know going into this that peach cobbler filling won't set up as much as peach pie filling. We're going light on the cornstarch here - just enough to barely thicken the filling so it isn't totally runny but not enough to make it gummy or more jelly-like.

You are going to be scooping out juicy peaches and pieces of cobbler topping with a spoon rather than a spatula. It's not going to hold up because it's not intended to.

Cobbler is a much less formal affair than other desserts and I'm totally okay with that.

That said, the peach filling and the syrup at the bottom of the cobbler will thicken slightly after pulling the cobbler out of the oven.

It's going to be difficult with the heavenly aroma and the sight of the bubbling juices and beautifully golden topping to resist devouring the cobbler on the spot, but you have to wait at least half an hour to give the cobbler a little time to set up so the syrup can thicken and the peaches don't scorch your tongue at first bite.

Just don't fret if it looks like there is too much juice in the bottom of the pan as you are serving. It will all get soaked up by the sweet cobbler topping that is sort of a cross between a cake and a biscuit.

Another thing to know about cobbler is that you are in control of the fruit to topping ratio. I always go on the high side with the fruit but a lot of cobbler-making will depend on whether you have gigantic peaches the size of a baby's head or little bitty peaches that come off a tree in your yard if you are lucky enough to have a peach tree!

I aim for between 8-10 cups of peeled and sliced peaches, but in all honesty, I don't usually measure the fruit when making a cobbler. I just start peeling and slicing until it looks like a lot of peaches and then call it good.

A good fresh peach cobbler is also the perfect dessert as we transition into fall as peaches come into season on the tail end of summer in most places and this cobbler has hints of the ubiquitous fall-favorite seasoning of cinnamon.

We go really light on the cinnamon here since we're still clinging to summer with this peach cobbler. But that little bit of cinnamon is just enough to remind you that Fall is around the corner, like when you are outside in the evening and realize there is a cooler breeze than you thought and you might need a sweater for the first time in months! 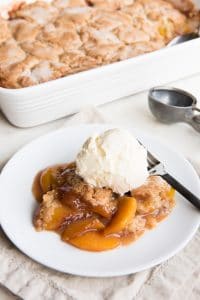 4.89 from 9 votes
Amy Nash
Prep Time 15 mins
Cook Time 40 mins
Total Time 55 mins
Course Dessert
Cuisine American
Servings 12 servings
Fresh Peach Cobbler just may be the ultimate summer dessert comfort food.  It's simple, easy and a timeless classic with a buttery cobbler topping, fresh juicy peaches, and hints of cinnamon in a rich, sweet syrup.  This is the best peach cobbler I have ever eaten!  It has a perfectly wonderful crust that is crisp on top but is also soft and moist and chewy thanks to the juicy peaches bubbling below it.

The number of peaches in your filling can vary depending on size.  You can always go on the high side even with large peaches if you prefer more fruit to topping, but I wouldn't adjust the sugar content of the fruit filling, even if using a few extra peaches. Also, this is called Fresh Peach Cobbler for a reason, but if you MUST make it during the off-season, I would recommend 10 cups of thawed and drained frozen peaches rather than canned peaches in syrup.  But really, nothing beats fresh peaches. Adapted from All Recipes. 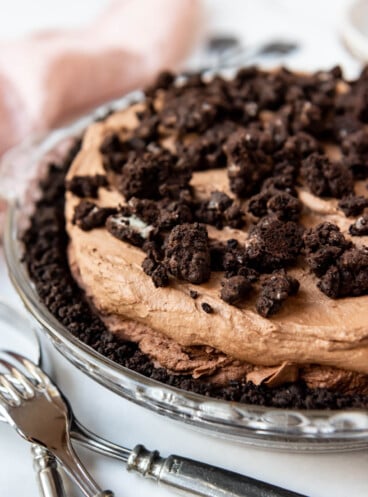