Loaded with sprinkles and filled with creamy, rich vanilla frosting, these Funfetti Whoopie Pies are a tasty handheld dessert that is a hybrid cookie-cupcake creation!

If you are looking for more handheld treats, be sure to try these Dulce de Leche Cupcakes or my Banana Bars with Penuche Frosting!

Funfetti whoopie pies are a colorful and delicious treat that will have you feeling like you’re eating a miniature birthday cake in every bite. With the fun and festive sprinkles, these whoopie pies are just as perfect for any birthday party as they are for an every day treat at home on the couch in your pajamas!

We are BIG fans of homemade funfetti cake and funfetti cupcakes, so it only makes sense that I would make a whoopie pie version of one of our favorite desserts! If you love whoopie pies, be sure to check out my red velvet whoopie pies as well!

These funfetti whoopie pies are the perfect dessert for a party because they freeze really well, so you can make them far in advance (up to 1 month!) and then just let them thaw before serving.

I made dozens and dozens of whoopie pies to freeze and take to a church-run Girls' Camp up in the mountains this year, and of all the varieties I came up with, these darling funfetti ones were my absolute favorite!

They are oversized and over the top with sprinkles galore and the best vanilla buttercream frosting ever sandwiched on the inside of each cookie. If I'm being perfectly honest, I'm not even a huge sprinkles fan, and I'm obsessed with these!

Is a whoopie pie a cake or a cookie?

It’s actually sort of a cross between the two. Think of the soft sponge tops of a cupcake or the soft, chewy texture of a good cookie. A whoopie pie is like both of these things at once. But made even better because it’s given a creamy filling sandwiched between two of these cookies.

They transport really well and make great lunchbox treats because the frosting doesn't get all over the place like with cupcakes.

How do you make a whoopie pie?

Should I refrigerate whoopie pies?

After filling your whoopie pies, storing them in an airtight container in your fridge can help them to remain nice and fresh. Or you can freeze them and store in freezer-safe ziploc bags for longer term storage. 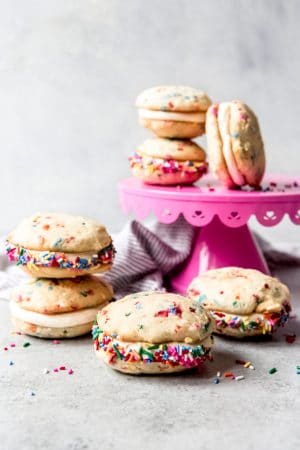