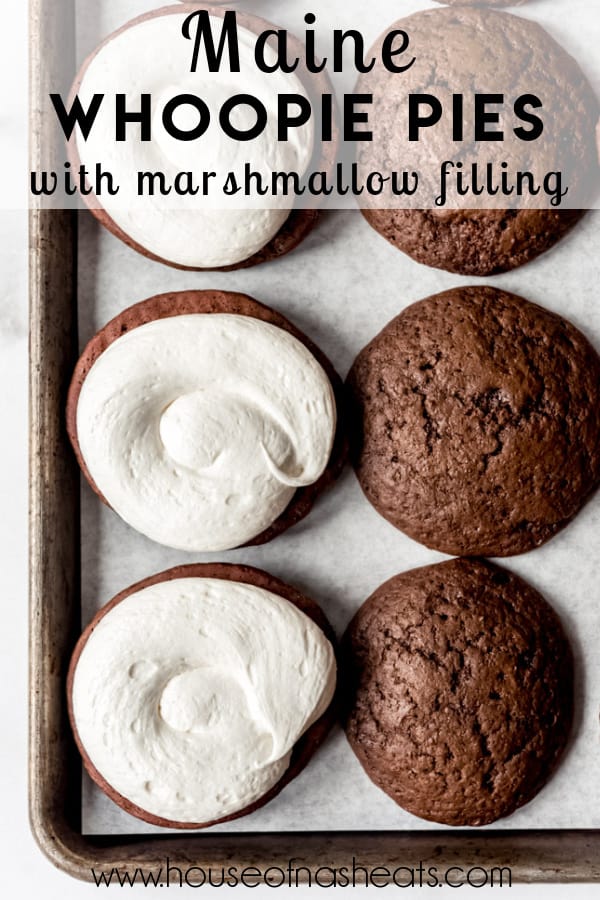 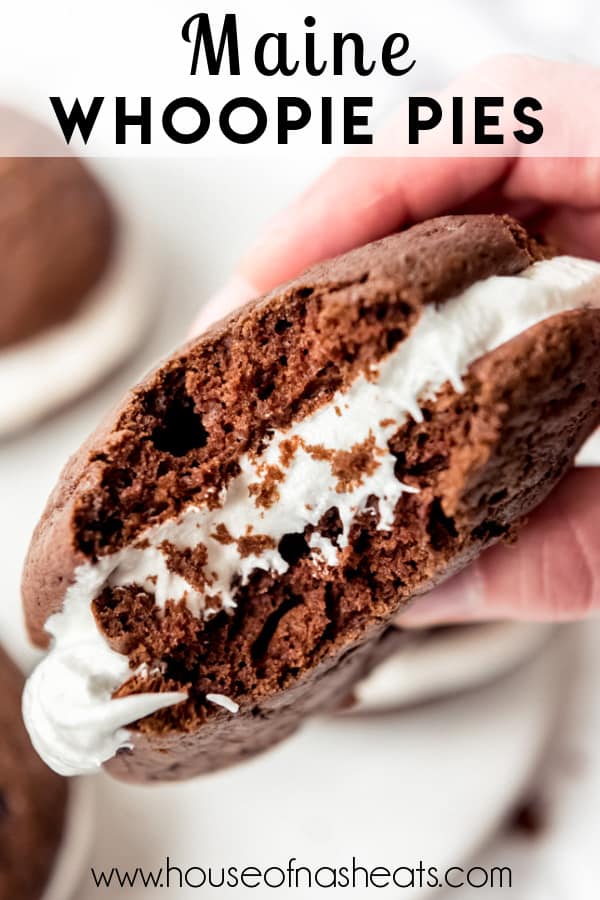 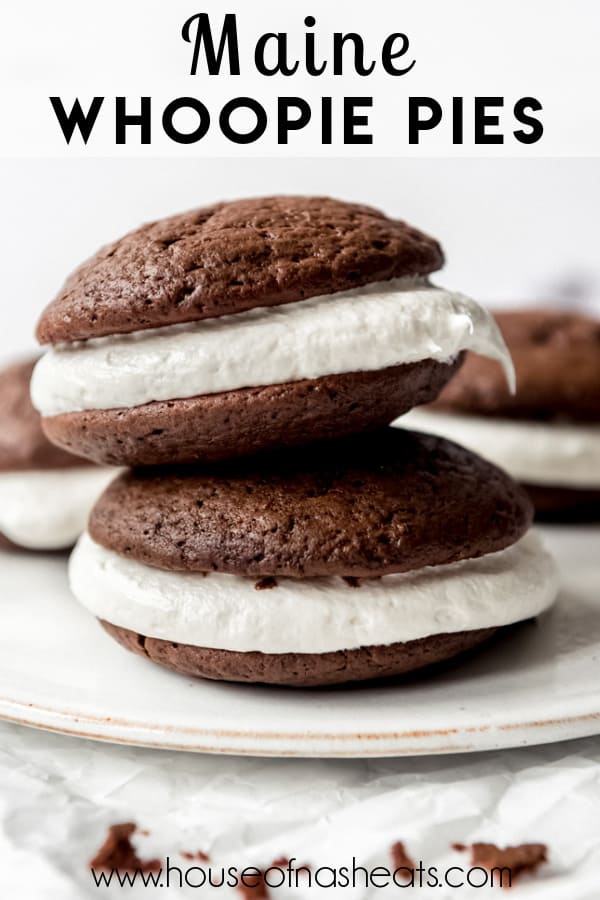 Soft, chocolate, and cake-like on the outside with fluffy sweet marshmallow frosting in the middle, these Whoopie Pies (also known as "gobs" in some places) are completely irresistible! Legend has it that kids would shout "Whoopie!" when there was leftover batter to make these, which was justifiable since they are such a delicious, fun, and unique dessert!

We are obsessed with all things chocolate and marshmallow. If you are too, don't miss our S'mores Cake (which has toasted marshmallow fluff on top!), Homemade Marshmallow Sauce for ice cream, or my personal favorite, Mississippi Mud Brownies!

I'm celebrating the great state of Maine this week in my American Eats series, where I make the most iconic foods and visit the most well-known flavors of each state, one state at a time! I've been working my way across the U.S.A. and some of the other recipes I've shared from Maine already are Wild Blueberry Scones, Maine Lobster Rolls, and New England Fish Chowder!

Maine isn't the only state where you will find these cake-like cookies sandwiched around a creamy white filling. They exist in other parts of New England, and in Pennsylvania they go by the name "gobs" and are associated with the Amish community.

While you can find them in different flavors, the classic version is made with soft chocolate cookies and a white center that is sometimes made with marshmallow fluff and sometimes not. But since Maine has actually laid claim to this iconic food as it's official state treat, I'm sticking with the name whoopie pie for my recipe.

Interesting fact: Maine has a state dessert (Blueberry Pie) as well as an official state treat! Apparently they like their sweets in the Pine Tree State!

What is a whoopie pie?

If you have never had one, a whoopie pie is like a super soft cookie sandwich. I think the domed chocolate "cookies" are more like cupcake tops (like muffin tops only in cupcake form!) because that's basically the look, taste, and texture of them. The batter is somewhat thicker than most cake batter, but definitely not as thick as most cookie dough.

This hybrid dessert is most often made with chocolate and marshmallow, although pumpkin is another really popular flavor! I have read that in Maine whoopie pies are often the size of hamburgers, which will yield you around 8 completed whoopie pies with the recipe below. But you can definitely make 12 more reasonably sized whoopie pies if you prefer.

Some people go so far as to buy a whoopie pie pan, but really all you need is a baking sheet, parchment paper, and a cookie scoop to make these chocolate whoopie pies!

The ingredients are simple and most of them are already in your pantry! I've included common substitutes for less common items below.

How to Make Whoopie Pies

Or be more adventurous with one of my other frosting recipes! Anything that would go well with chocolate cupcakes would be delicious in these whoopie pies.

I can also imagine sprinkling the marshmallow filling with crushed candy canes before sandwiching for a peppermint version that would be delicious at Christmas time!

Keep your whoopie pies in an airtight container in a single layer. The moist, tender tops have a tendency to stick if you stack them on top of each other, so if you need to do that, place a sheet of wax paper or parchment paper between them. Store them in the fridge for up to a week, then set them out on the counter for 30 minutes or so to come up to room temperature before serving.

These are also fantastic for freezing! I actually made 8 dozen whoopie pies a few summers ago in a bunch of different flavors and froze them to take to a Girls' Camp where I was a leader and was responsible for a campfire dessert for over 100 teenage girls one night. I froze them all flat first, then once them were firm, I stacked them on their sides to transport them. They held up great, then we just let them sit out right before serving and people raved and raved about them!

You can freeze whoopie pies for up to 2 months. Thaw at room temperature before serving. 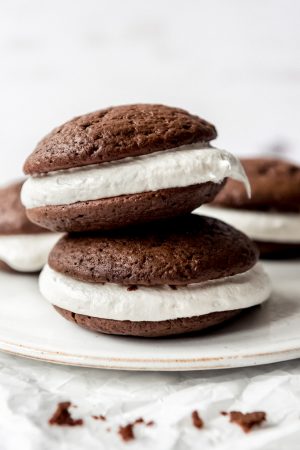 5 from 1 vote
Amy Nash
Prep Time 15 mins
Cook Time 10 mins
Total Time 25 mins
Course Cookies
Cuisine American
Servings 8 -12 servings
Soft, chocolate, and cake-like on the outside with fluffy sweet marshmallow frosting in the middle, these Whoopie Pies (also known as "gobs" in some places) are completely irresistible! Legend has it that kids would shout "Whoopie!" when there was leftover batter to make these, which was justifiable since they are such a delicious, fun, and unique dessert! 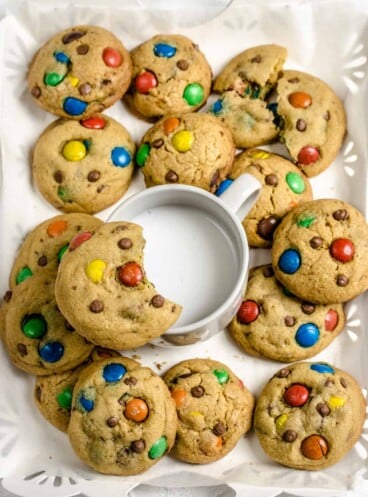 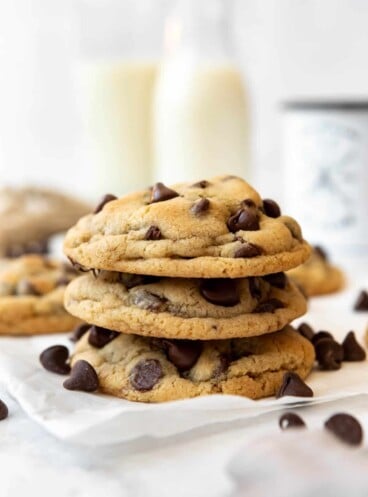 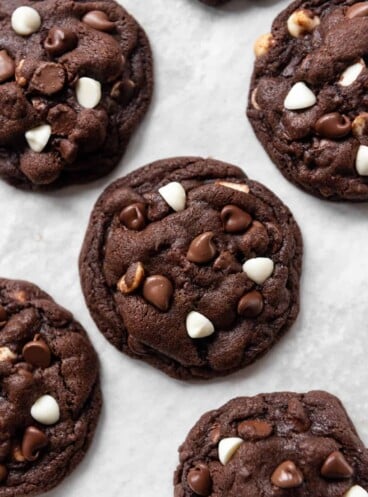 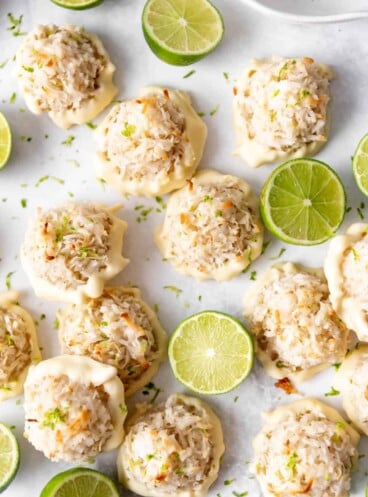