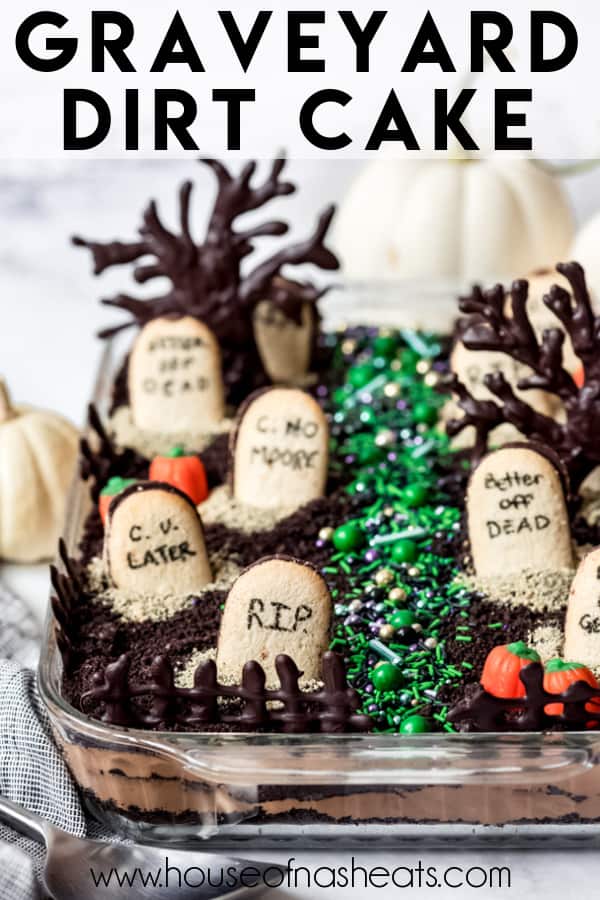 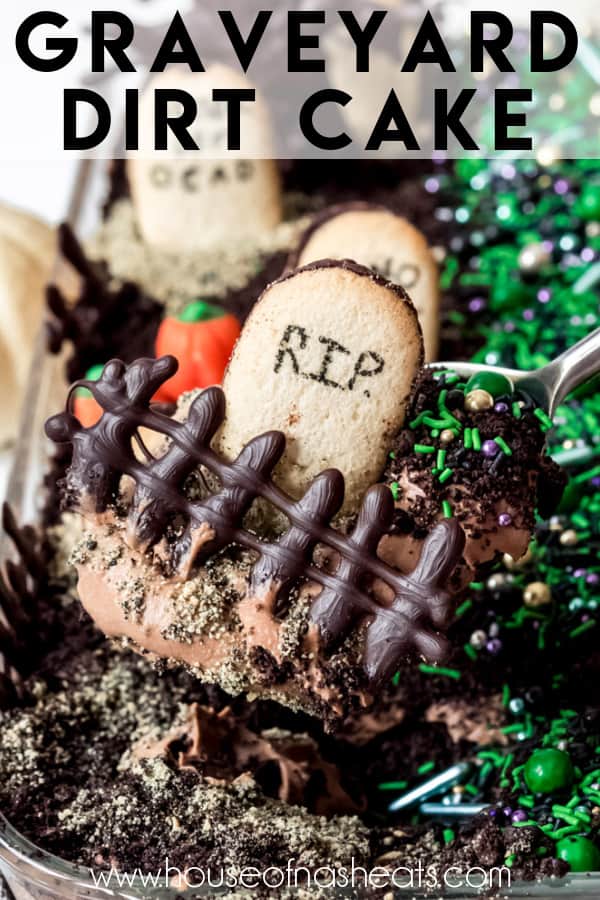 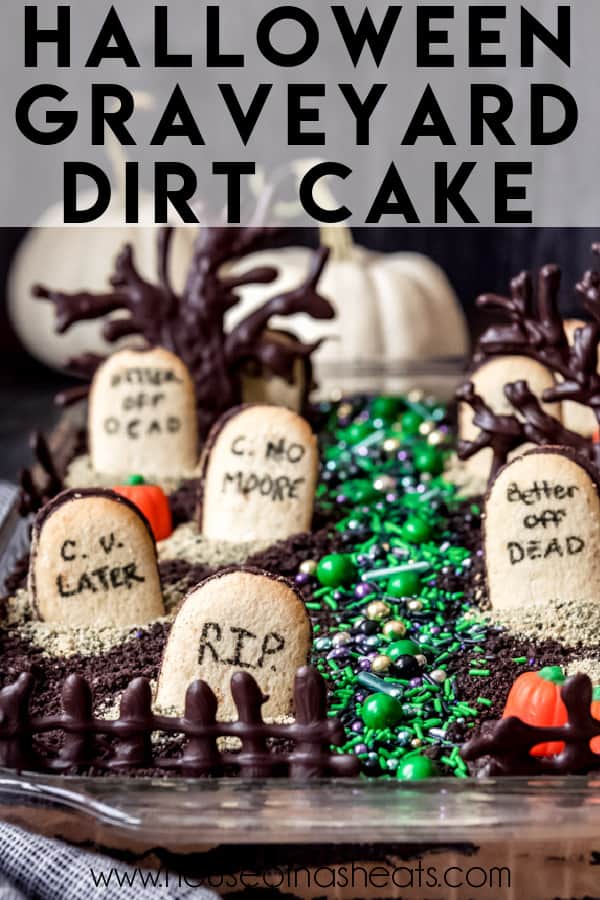 This spooky chocolate Graveyard Dirt Cake is a classic Halloween dessert beloved by kids and adults alike! But instead of using a pudding mix and Cool Whip, this version is made completely from scratch!

Love Halloween? Be sure to check out some of our other Halloween recipes like Poison Candied Apples, Halloween Chocolate Cherry Hand Pies, and Hocus Pocus Marshmallow Pops!

I have always loved this no-bake dessert idea, whether it's served family style in a 9x13-inch pan like I did here, or divided between individual cups (also fun, but definitely extra work!).

More pudding than actual cake, the easy, mousse-like chocolate filling is layered with Oreo crumbs to create the impression of dirt. It's the decorating that really sells the idea and makes this a fun dessert for Halloween. Although really, this recipe is one that can be enjoyed all year long, especially in the summer when it's hot and you don't want to heat up the oven!

The classic approach to the chocolate filling is to just make a couple of packages of instant chocolate pudding and fold them together with a tub of thawed Cool Whip. But I wanted to make a homemade version using real ingredients.

If you haven't made homemade chocolate pudding, you are in for a (literal) treat! It's actually super easy, takes less than 10 minutes, and tastes 1,000X better than the box version.

How to make dirt cake

I really wanted my graveyard to have a haunted feel that the tombstones along weren't giving, so I decided to create some spooky trees to add a height element to my dessert. These were so much easier to create than I thought they would be!

All you have to do is melted some dark or milk chocolate in the microwave using short 20 second bursts of heat and stirring between bursts until melted and smooth. Many microwaves even have a "melt" feature to help you with this.

Next, transfer the melted chocolate to a piping bag or ziploc bag and snip off the tip to create a small round hole for piping.

On a baking sheet lined with parchment paper, pipe the trunk of the tree first, making sure to include thinner, wiggly lines for "roots". The roots won't actually be seen one you stick the trees into your chocolate pudding dessert, but if you are going to lay these flat or use the trees for another purpose, the roots definitely add to the overall "tree" effect.

Pipe longer, thick "main branches" from the top of the trunk, then continue to build and add onto those main branches, piping smaller "twigs" that go off in different directions. Fill in gaps with more chocolate, then let the trees harden as the chocolate cools completely before peeling off the parchment paper and using in your dessert.

You can see from the trees below that my first attempt in the upper left-hand corner isn't as convincing or clean-looking as my other attempts.

Fence posts can be made by piping short parallel lines in a row, then tying them together with a couple of perpendicular lines of chocolate piped right across the top. I recommend making shorter fence segments since longer ones tend to be less sturdy and break easily.

To really make this look festive and fun, you need to come up with a spooky design for decorating it. I chose to go with a haunted graveyard, complete with tombstones and ghostly trees, this time.

Candy corn, zombie hands, eyeballs, and other decorating elements are almost always available at craft stores and in seasonal aisles at grocery stores. Cake decorating brands always seem to have fun new things to use each year!

Here are some other ideas to get you started. You can use any combination of decorating elements to come up with your own ghastly treat. Let your imagination run wild and see what you can come up with!

If it's no longer Halloween and you want to make dirt cake, consider adding small toy trucks for a child's birthday or using plastic shovels, chocolate seashells, and graham crackers in place of the Oreos to create a beachy "sand" effect instead. 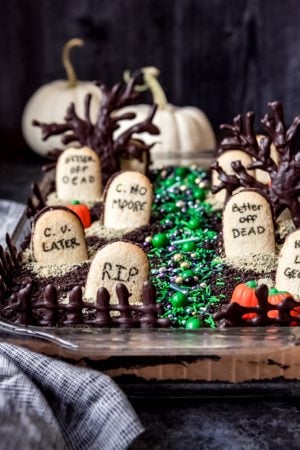 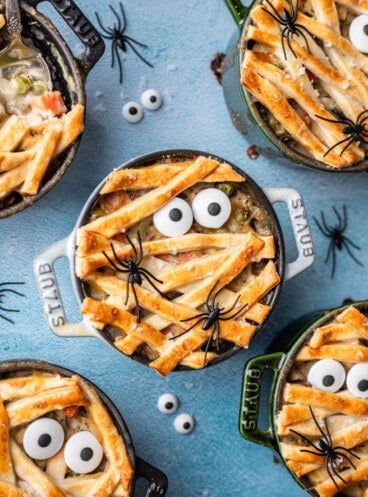 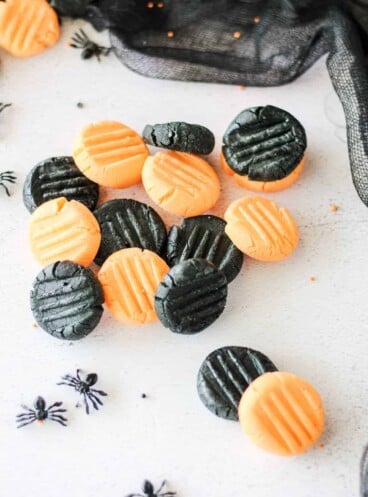