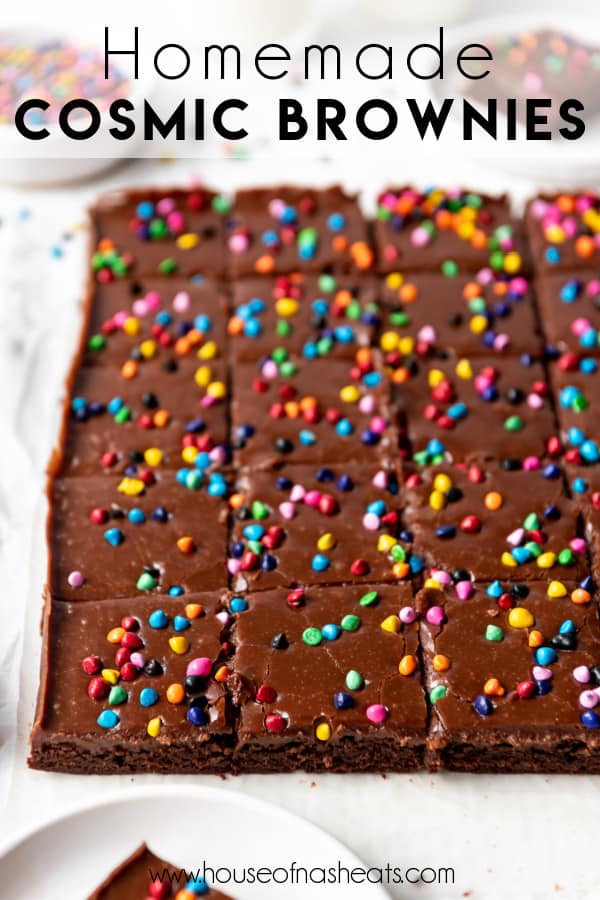 These Homemade Cosmic Brownies are just like the original Little Debbie version, only even better. There's more chocolate flavor in these fudgy, rich brownies that get treated with a fudge frosting and sprinkled with candy coated chocolate sprinkles for an out-of-this-world treat.

Looking for fun, colorful dessert ideas? Our Homemade Funfetti Cake and Homemade Rainbow Chip Frosting are reader favorites that you might also enjoy!

When I was growing up Little Debbie brownies were just regular frosted brownies with walnuts on the top. Still definitely a yummy childhood lunchbox treat, but it wasn't until 1999 when Little Debbie introduced their cosmic brownies with the rainbow colored chocolate pieces on top that they seemed to gain a cult following!

While some folks might guess that the name comes from their colorful chips giving these galaxy brownies an intergalactic look, the moniker was actually in tribute to the popular cosmic bowling craze of the 90's! Bowling in the dark with black lights making everything glow neon is something I definitely grew up with, and it's what actually inspired the look of these treats!

Start by beating the melted butter with both types of sugar in a large bowl. This can also be done by hand. Add the eggs, egg yolk, and vanilla, then beat again.

Stir in the flour, cocoa powder, cornstarch, and salt by hand just until everything is combined.

Pour and spread into the corners of a 9x13-inch pan lined with a parchment paper sling for easy removal once the brownies have cooled. Bake for 18-22 minutes, just until the brownies are done and a toothpick inserted into them comes out with just a few crumbs on it. You don't want to overbake or the brownies will be dry.

Cool completely before topping with the fudge frosting.

To make the fudge frosting, start by combining the sugar, milk, butter, and cocoa powder in a medium saucepan over medium heat. Cook, stirring frequently until the butter has melted and the mixture comes to a boil. Boil for 3 minutes, then remove from the heat and beat in the powdered sugar and vanilla until smooth.

While the frosting is still hot, pour it over the cooled brownies and tilt the pan to spread the frosting into the corners and create an even layer of fudge icing on top.

Sprinkle with the rainbow coated chips while the frosting is still soft so they can sink in slightly since the fudge frosting sets up fairly quickly.

Let your homemade cosmic brownies sit uncovered until the frosting has cooled completely and had a chance to set up before lifting them out of the pan and slicing into rectangles or squares.

If you want clean edges when slicing these homemade cosmic brownies, I recommend chilling them for a bit first so they are cold. If I'm taking pics and wanting really clean slices, I will even go so far as to rinse the knife under hot water and wipe it with paper towels between each slice. Also, try to do one quick slice, rather than dragging the knife through the brownies, which can cause them to tear and stick to the knife.

Can I make these with ganache instead of fudge frosting?

You can certainly use a chocolate ganache for your homemade cosmic brownies if you prefer it over making the cooked fudge frosting. I have made them both ways and they turn out good, I just prefer the fudge frosting in terms of taste and being more like the classic cosmic brownies. For a ganache, just heat ½ cup heavy cream in the microwave for 60 seconds until very hot. Pour the hot cream over 1 cup semisweet chocolate chips and ½ cup milk chocolate chips in a bowl with a pinch of salt and let this sit WITHOUT STIRRING for 3 minutes. Once the chocolate has had a chance to melt, whisk or stir until you have a thick, smooth ganache. Pour and spread over the brownies in place of the fudge frosting, then let cool until set.

Why use an egg yolk in place of a whole egg?

The reason for using an egg yolk is that it adds richness and density to the brownies without making them quite as cake-like. It really adds to that chewy, fudge-factor of homemade cosmic brownies. 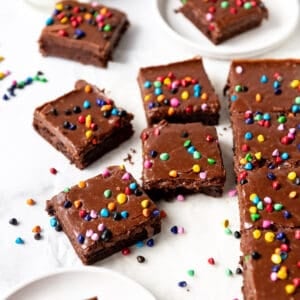