This easy Chicken Cordon Bleu has moist chicken, rich ham, and Swiss cheese that gets breaded with a garlic, herb and cheese breading and served with an easy savory sauce, just like my mom makes it. You're going to love it! 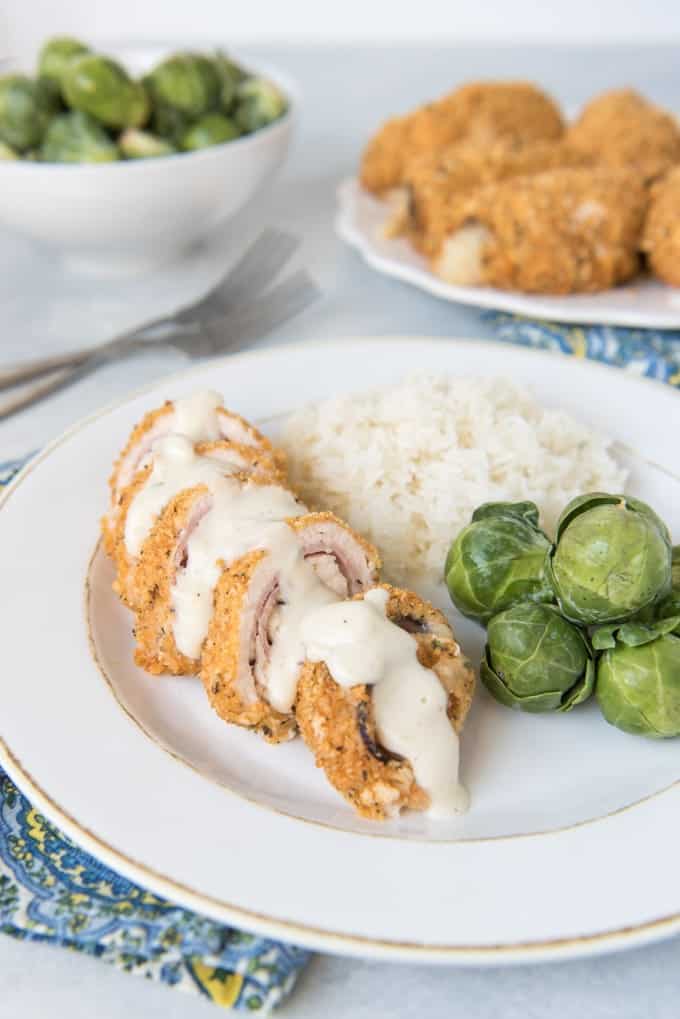 Growing up, my mom would make Chicken Cordon Bleu for us every year for Christmas dinner. The flavors of the rich ham, melted cheese, and breaded chicken all rolled up into a pretty roulade and then served with a savory white sauce is heavenly and totally worth the little bit of extra work it takes to make this impressive dish.

Really, aside from having a few extra steps, chicken cordon bleu isn't hard to make! It's perfect for a fancy special occasion meal or a Sunday dinner.

I'm pretty sure that my mom's chicken cordon bleu recipe came from one of those church recipe swap activities where members of the congregation contributed favorite recipes which then got printed out and distributed to everyone.

I don't even know if she still has the original copy but I seem to remember the recipe being attached to a bunch of others with a staple in the upper left corner of the pages.

I have a few similar collections of recipes that have found their way into my bookshelf over the years and I love them because in the days long before food blogs and pinterest, that was how favorite recipes got passed around from one home to another.

One reason why I love this version of Chicken Cordon Bleu so much is that is has so much more flavor than any other Chicken Cordon Bleu I have ever tried, and I'm not just talking about the frozen chicken cordon bleu rolls you can buy in the freezer section at Costco.

Many chicken cordon bleu recipes just call for breadcrumbs with some salt and pepper when it comes to breading the chicken. But my mom's version is a combination of Shake N' Bake, parmesan cheese, and a dry garlic & herb dressing mix.

I know Shake N' Bake may sound retro or outdated but before you go knocking it, it's really just a convenience product of breadcrumbs and seasoning that comes premixed and it is so easy to make your own version at home with ingredients you already have in your pantry if you don't want to buy the premixed stuff at the store that probably has additives and stuff like that!

Be warned when you look at the list of ingredients for this recipe - it's long, but that doesn't mean it's hard and all of it should already be in your cupboards (as long as you always have a box of Panko breadcrumbs on hand, like I do).

Trust me, it takes less than a minute to pull out the jars of paprika and oregano and thyme and other spices and measure them into a bowl. But if you have a box of original Shake N' Bake, then by all means, go ahead and use that! 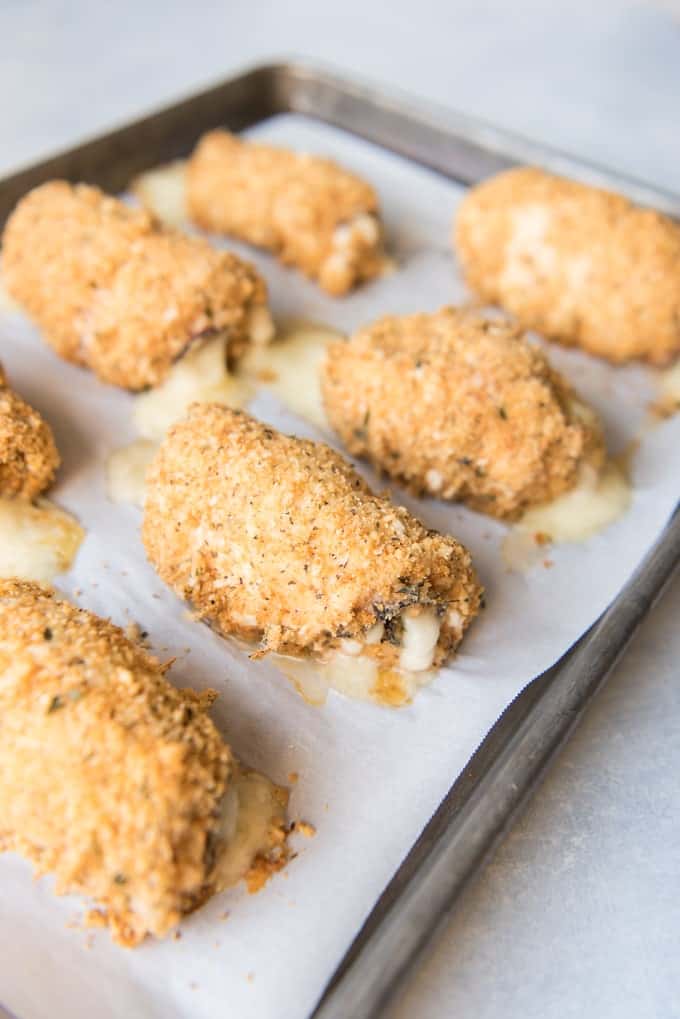 When it comes to assembling chicken cordon bleu, I have found that the key is to have your meat pounded to a uniformly thin size so that it is easier to roll up into a tight roulade (which sounds fancy but literally is just rolled meat and comes from the french word "rouler", which means "to roll"). B

ut most chicken breasts are so large that if you just start pounding away you are going to end up with massively huge servings. So the approach I like best is to first slice each chicken breast in half horizontally so that you have eight pieces of chicken to work with.

Those chicken cutlets can be easily flattened to about ¼" thickness using a meat mallet with one piece of chicken at a time placed inside a ziploc bag (to contain any splatters of meat juice and keep things sanitary).

Then it's just a matter of layer ham and Swiss cheese, rolling everything up and securing it with toothpicks, and dredging the rolled chicken in flour, then egg, then a seasoned breading mixture. 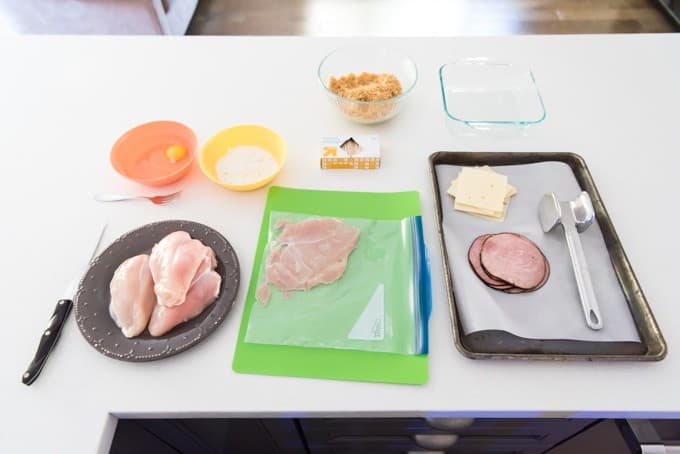 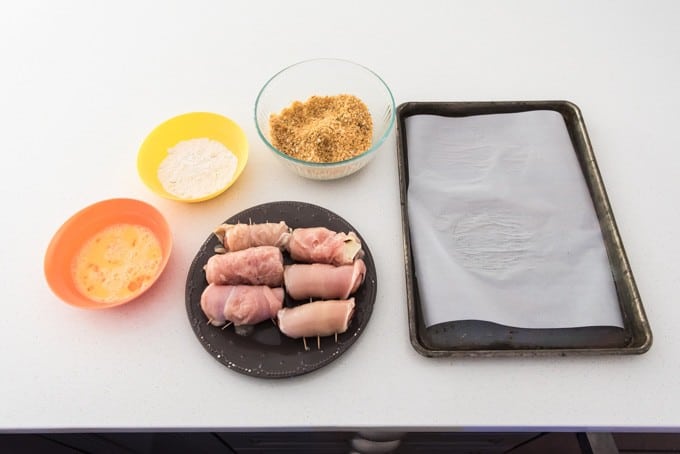 The only real step where I departed from the way my mom makes this Chicken Cordon Bleu is that she usually heats a little oil in a skillet and browns each roulade on all sides before placing it in a casserole dish with the sauce and cooking it through that way.

I totally love it made this way but it doesn't turn out quite as pretty as cooking the breaded roulades on a baking sheet in the oven and the frying process is both messy and adds that much more preparation time since you have to work in batches to get all the chicken browned.

I think it works just as well to cook the sauce and the chicken cordon bleu separately, which I think is a more traditional approach anyway. 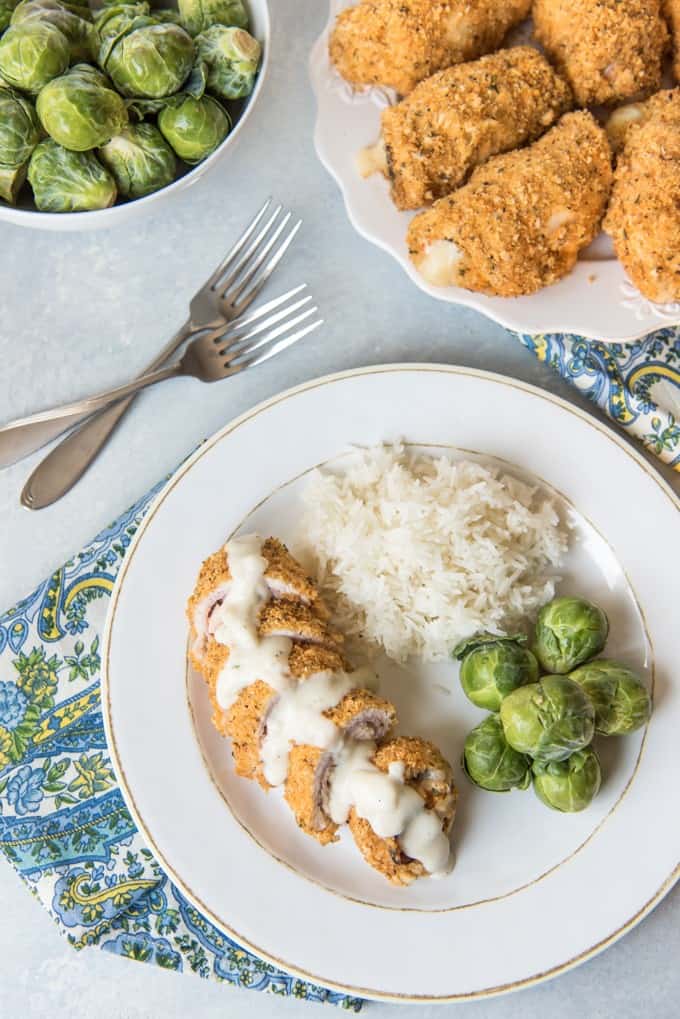 We always serve this with cooked white rice and some kind of green vegetable. And the leftovers are always so, so good the next day!

What to Serve with Chicken Cordon Bleu 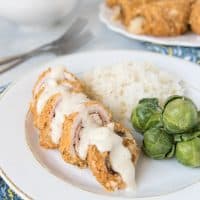 You could even make a gluten-free version of this by replacing the all-purpose flour for dredging with rice flour and subbing almond ground almond meal for the breadcrumbs!