This Apfelstrudel recipe (German Apple Strudel recipe) might sound daunting, but it’s much easier than it seems and so much fun to make. And the resulting apple strudel is a delicious, festive dessert filled with sweet, spiced apples and raisins in a flaky crust that everyone will love.

The idea of making apple strudel from scratch might deter some from attempting it, but really, it’s simpler than you might think. This apfelstrudel recipe will walk you through the process. 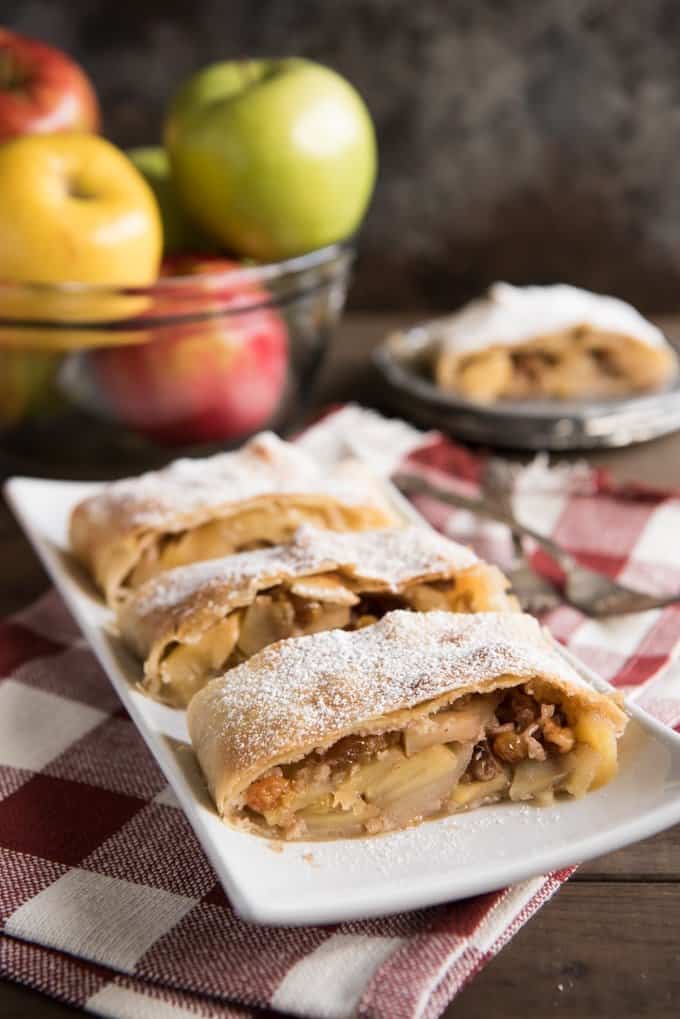 I took German all through high school and college. My dad lived in Austria for two years and I thought I would learn the language and he and I would be the only ones able to speak it and no one else would understand. I thought that would be the best thing ever. Except it turned out that my father had forgotten most of his German. And now, sadly, so have I except for a few phrases really!

But I still love and adore things that remind me of Germany and it’s language, culture, people, and of course, food, and I am dying to go back. One of my favorite traditions that we have been creating at Christmas time is to go into San Francisco to one of our favorite German restaurants for a Weihnachten dinner. There is just something about Germany that feels so Christmas-y.

One of my bucket list items is to visit the Striezelmarkt (the famous Christmas market dating back to the 1400’s) in Dresden one of these years. 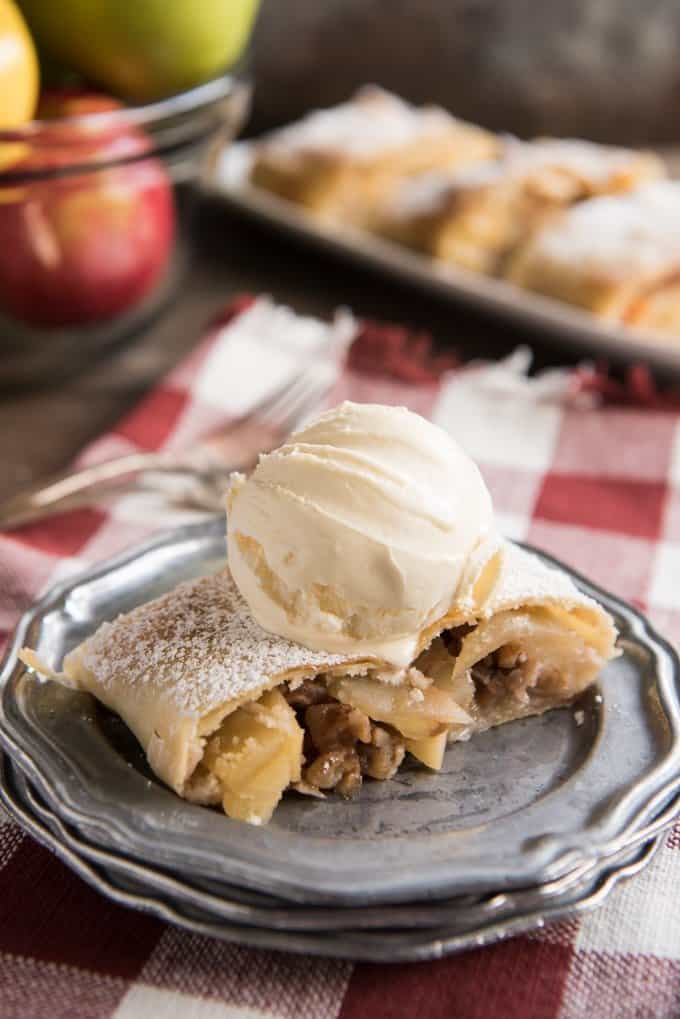 Truth be told, this apfelstrudel recipe could really be Austrian, Czech OR German. From my understanding, the history of apple strudel is that is was invented in Vienna, Austria, but became popular throughout neighboring regions like the Czech Republic and southern Germany, particularly Bavaria, where Munich is located and Oktoberfest is celebrated every year.

And while there are subtle variations like whether to include nuts or raisins in the strudel, there seems to be a consensus that a traditional apfelstrudel recipe consists of an unleavened, elastic dough that gets stretched, not rolled, incredibly thin, then filled will breadcrumbs and a sweetened, cinnamon apple filling.

Based on my experiences living Germany for one summer (I know, it’s not much to go on) and traveling through southern Germany, Austria, and the Czech Republic, I definitely want my apple strudel to have raisins but no nuts. Which is nuts (see what I did there?) because typically I love nuts in everything, but when I tried making a batch with nuts recently, it just didn’t taste the same as the apfelstrudel I would get during my travels.

I specified golden raisins in this recipe because I really prefer them in most baking and feel like they have a subtler raisin flavor than the dark raisins. Just plump them in some hot water for 10 minutes before adding them to your strudel so they are nice and soft. 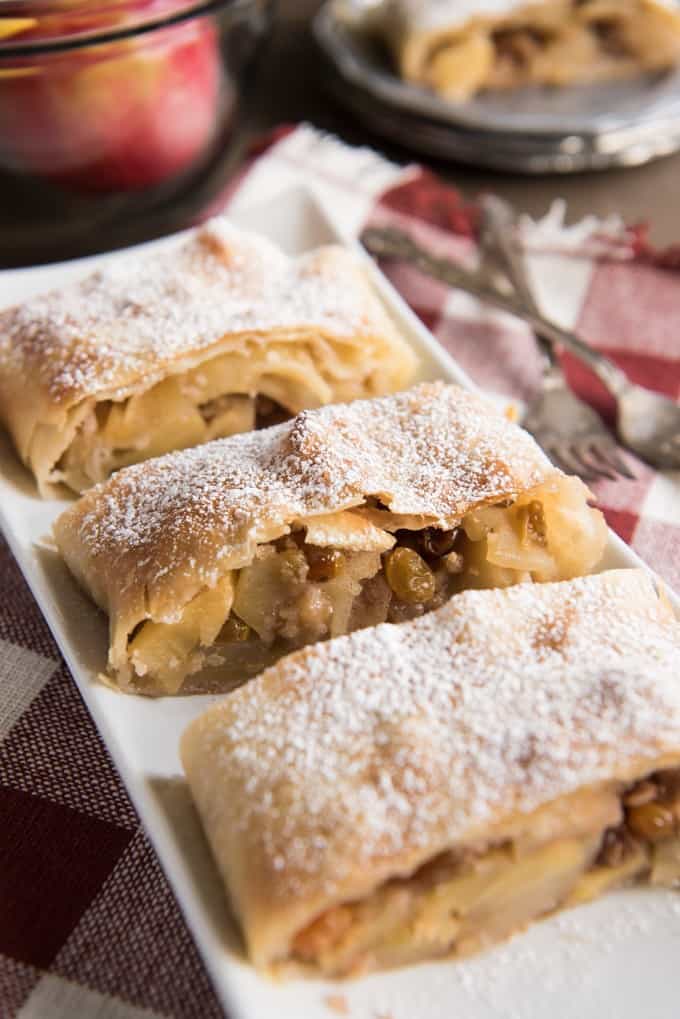 When making a traditional apple strudel recipe from scratch, really the only potentially intimidating element is going to be the strudel dough itself. And the reason is because rather than rolling out the dough, which is more familiar to us, homemade apple strudel dough gets stretched thinner and thinner, until it is so thin that you could read newspaper print through it.

Like, that’s actually a thing. To stick a piece of paper under the dough and see if you can read what’s on it. I used a patterned tablecloth to achieve the same result when making this apfelstrudel recipe.

But do not fear, I promise it’s easier than it sounds to stretch your strudel dough as thin as you need it. The trick is to use an acid like apple cider vinegar or lemon juice in the strudel dough, knead the dough well to develop the gluten, and then let it rest so that it can fully relax before you attempt stretching it.

Since there is no yeast, the dough won’t rise during the resting time, but the acid from the vinegar will relax the gluten strands which will become more elastic and make the dough easier to stretch!

My helpers were front and center for this one. They always come running whenever I am making something with apples because they love to eat the peels. Notice Rose’s arms protectively encircling her horde of peels. 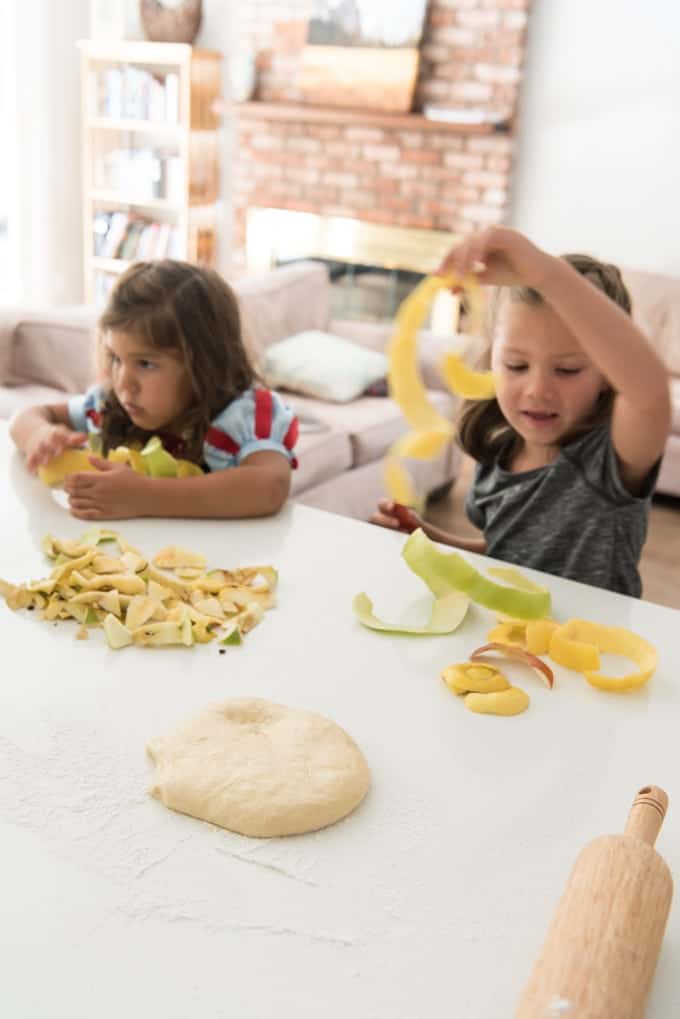 When the dough has rested sufficiently, you will first roll it into a rectangle, just to get things started. There’s no required dimension or thickness, just roll it out a bit so you aren’t stretching a big ball of dough. About the size of a large piece of paper will do. Then transfer it to a large area covered in a large, clean tablecloth or bed sheet. 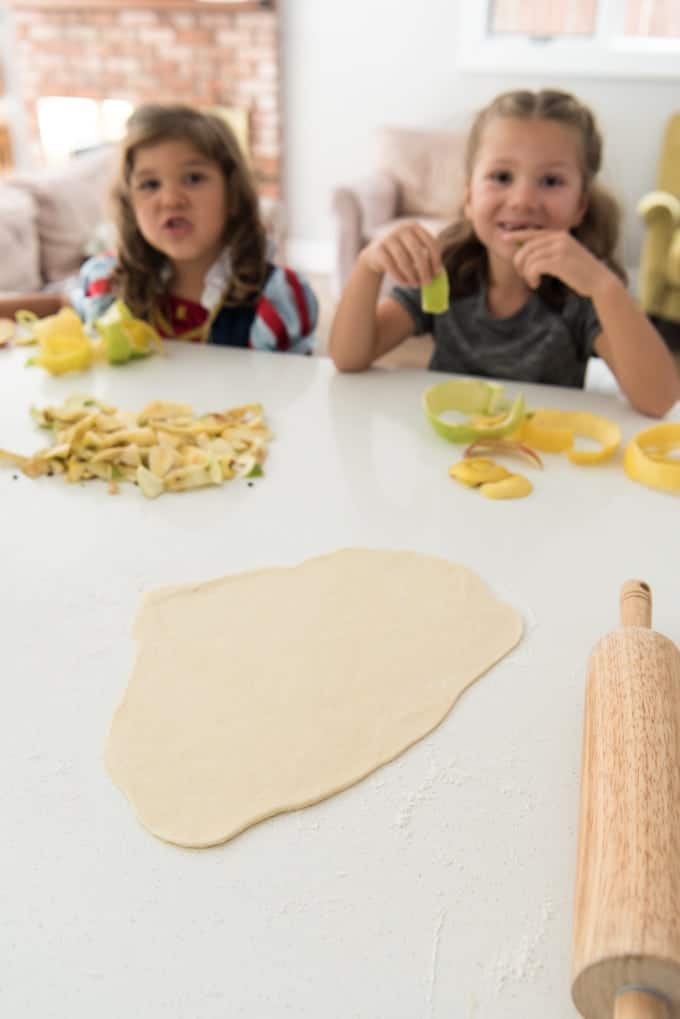 Working carefully, you want to just lift and stretch the dough, sliding your hands underneath (be sure to remove rings in advance!) with palms down and gently pulling the dough out from the center, letting it slide off your hands.

Working your way around all sides of the dough, you just continue to stretch and pull it away from the center, until it forms a very large, very thin rectangle. If you get some holes, no worries. Eventually you are going to roll the whole thing up and no one will be the wiser. 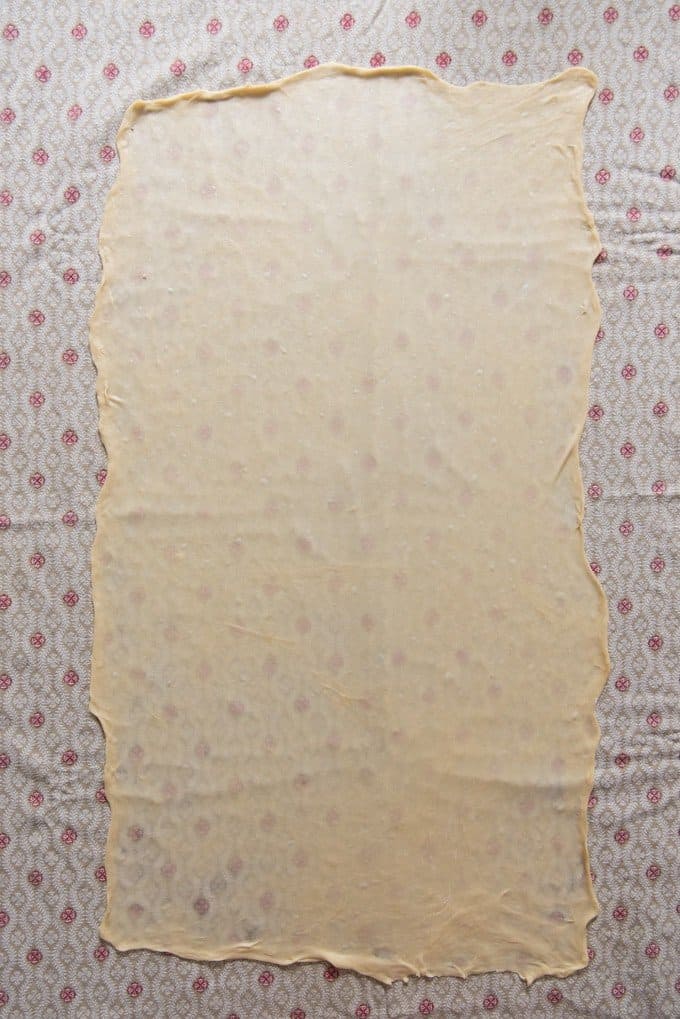 Once your strudel dough is sufficiently thin enough for you to see the pattern of your tablecloth through it, you will gently spread it with butter and sprinkle half of it with the raisins and breadcrumbs that will soak up juices from the apples as they cook so you don’t end up with a soggy strudel.

Then half of the dough gets topped with the apple filling, leaving a 3-inch border around the edges. 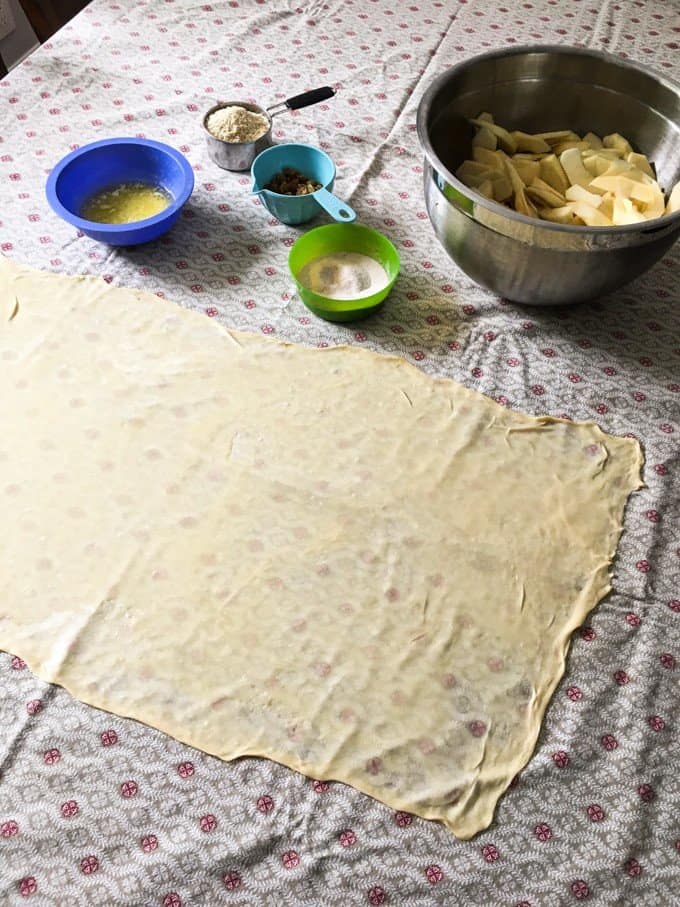 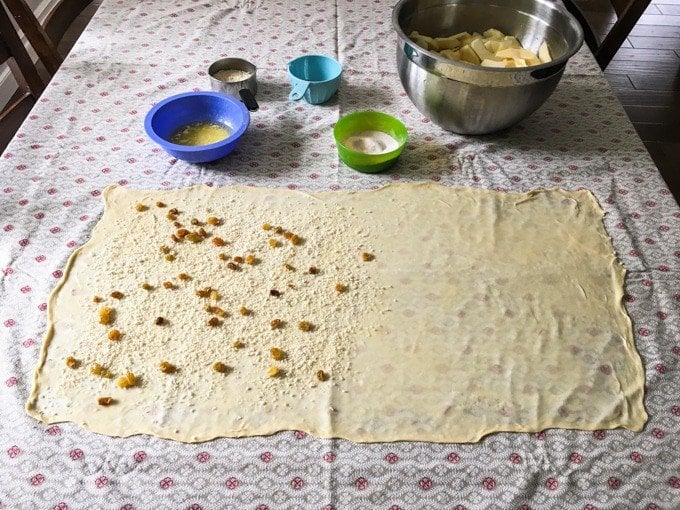 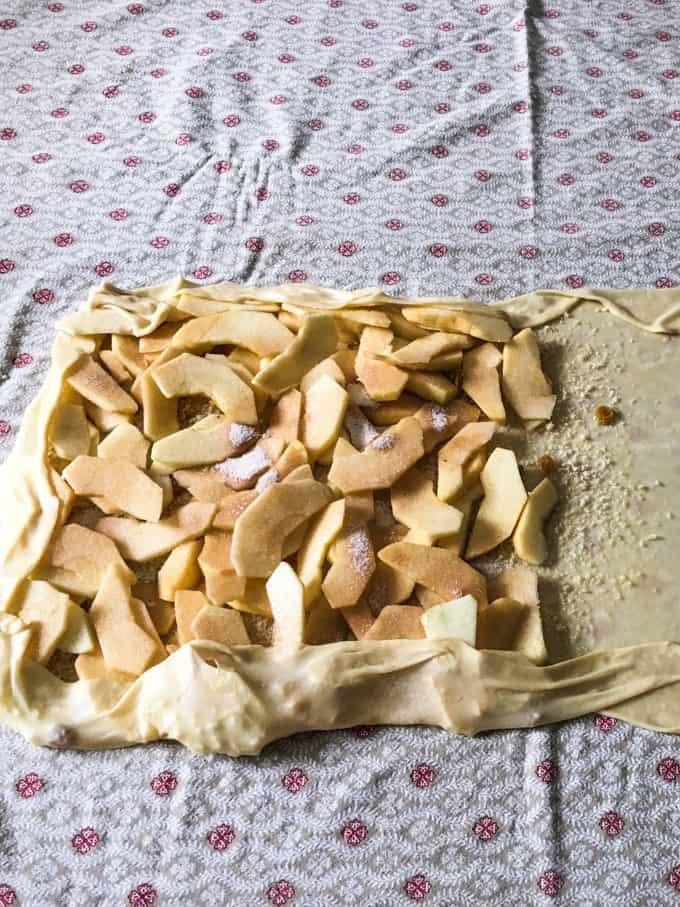 Then grasp the cloth or sheet right by the long edge of the strudel on the filled side and using the cloth, fold/roll the strudel onto itself, just like you would cinnamon roll dough except that strudel dough is too delicate to roll by hand, which is why you let the cloth do the work.

Adjust your grip on the fabric to be closer to the now partially rolled strudel and lift to roll the strudel again, continuing until the strudel rolls completely up on itself and making sure that the edges that were folded over don’t come untucked. 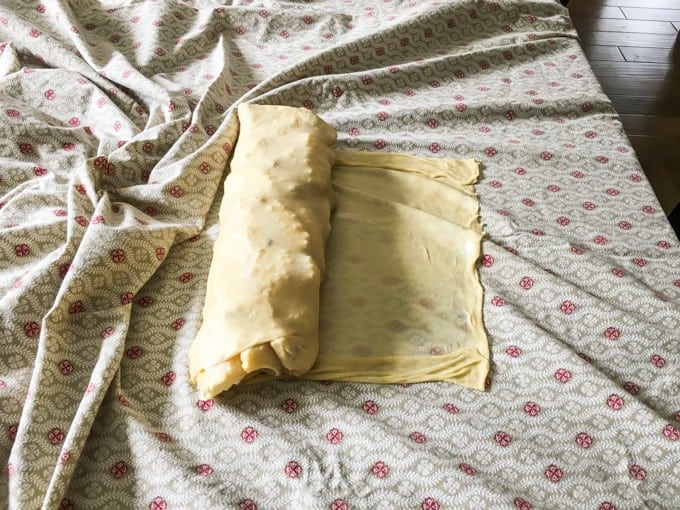 If your strudel doesn’t fit on your pan, you can curve it into a “C” or “U” shape and no one will be the wiser when you slice it before serving. Some people only make one giant strudel which they intentionally curve to fit on the pan. I just divided the dough in half to make two separate strudels. 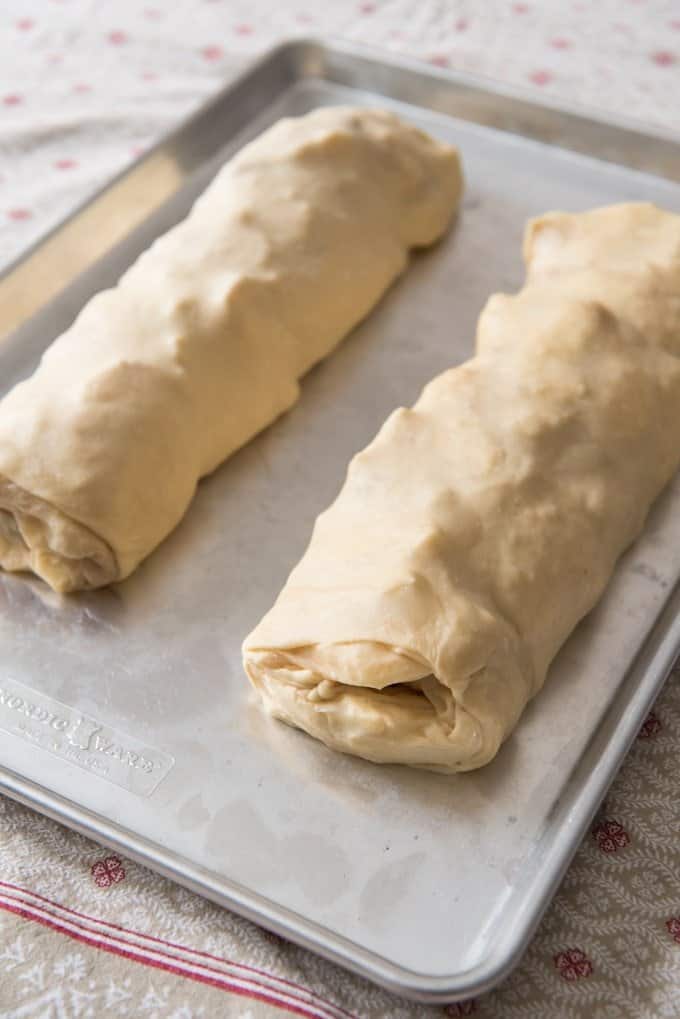 I think this is such a delightful Fall dessert to serve with all the fresh apples that come into season, but it is also so perfectly Christmas-y  since the song “My Favorite Things” from “Sound of Music” seems to have become a Christmas song (not quite sure how, but I always hear it at Christmas time) and it includes the line about “crisp apple strudel”.

Which I sort of think is a misnomer – a real strudel, from what I have experienced, doesn’t seem to be so much “crisp” as possibly “flaky” with delicate layers of strudel pastry created by rolling the thin strudel dough with a thin layer of butter around and around the strudel as the whole thing gets rolled up as described above. 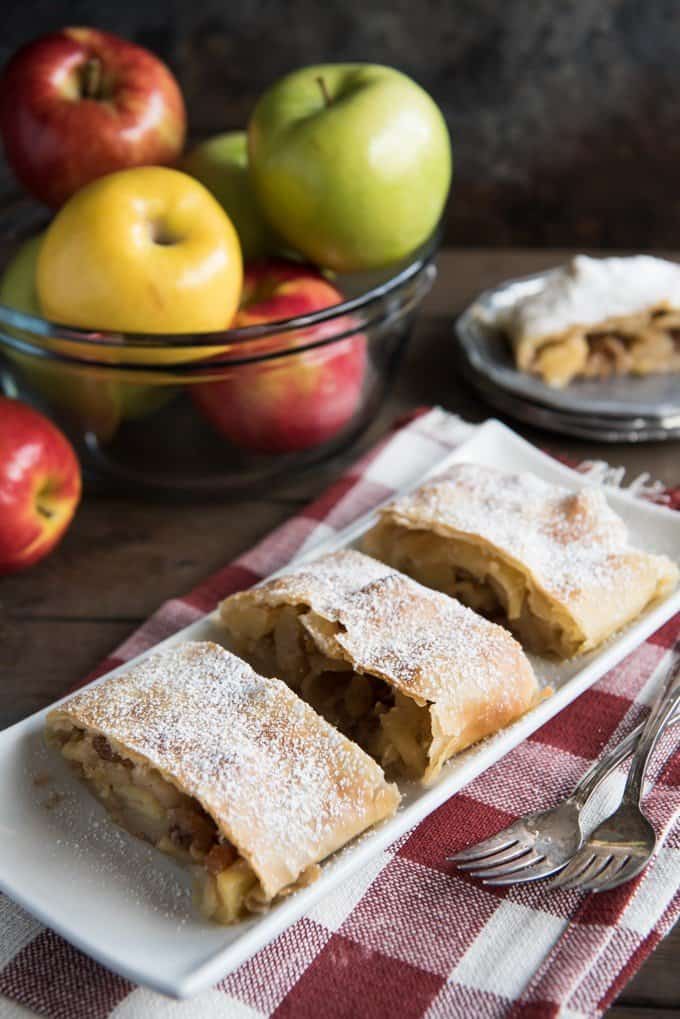 Some people cheat the system and there are recipes for apple strudel that use sheets of phyllo dough rather than making strudel dough. But we’re not scared of trying to make real German apple strudel from scratch, are we? No.

Oh, and while not traditional, I love a big scoop of vanilla ice cream to go along with my apple strudel! 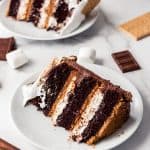 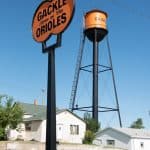 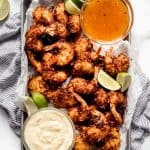 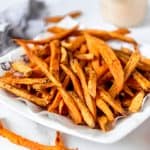