Grilled Cactus and Corn Salad (aka Nopales Salad) is a wonderful, tangy and savory side dish, perfect for grilling and serving at summer barbecues. 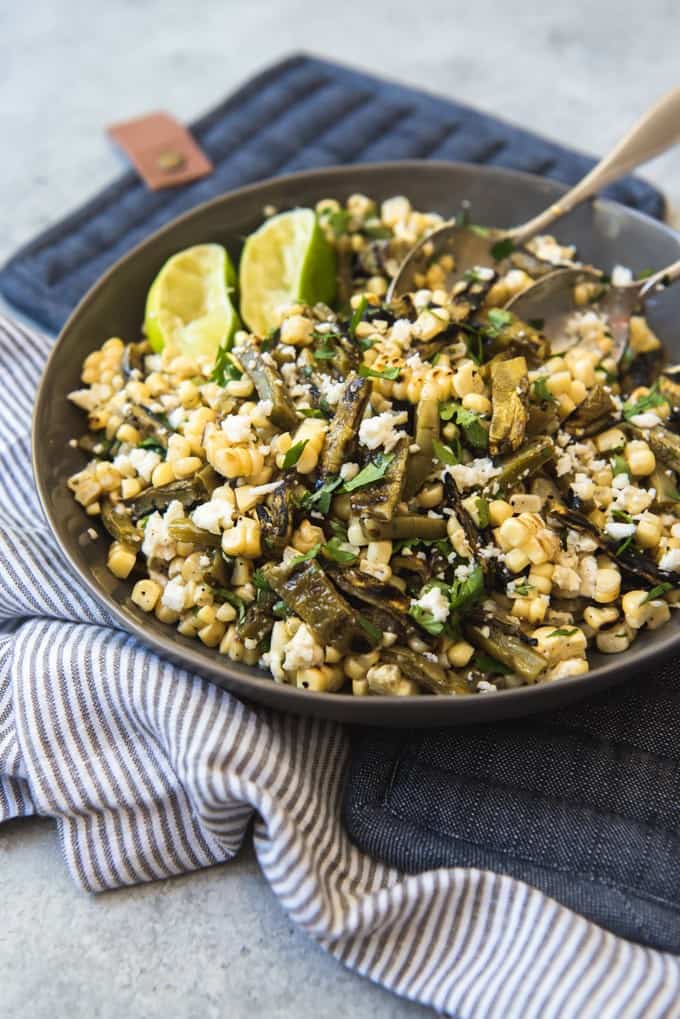 When I think of Arizona, I think of cactus! Every time I visit Arizona I am amazed at many, many cacti that cover the landscape.

If you have never seen a saguaro in real life, they really are impressive and majestic things! But there are dozens of other types of cacti that grow all over in that state.

So when I was at my local farmer’s market and saw a pile of prickly pear cactus paddles, also known as nopales (no-PAH-lez), I bought them on a whim and took them home to figure out how to use them for an Arizona post in my American Eats series.

I debated making nopales salsa or even scrambling them with some eggs, but then I started seeing cactus salads and decided to go that route so I could use them as a side dish with some kind of grilled meat and incorporate the fresh summer corn that we’ve been enjoying a lot of lately. 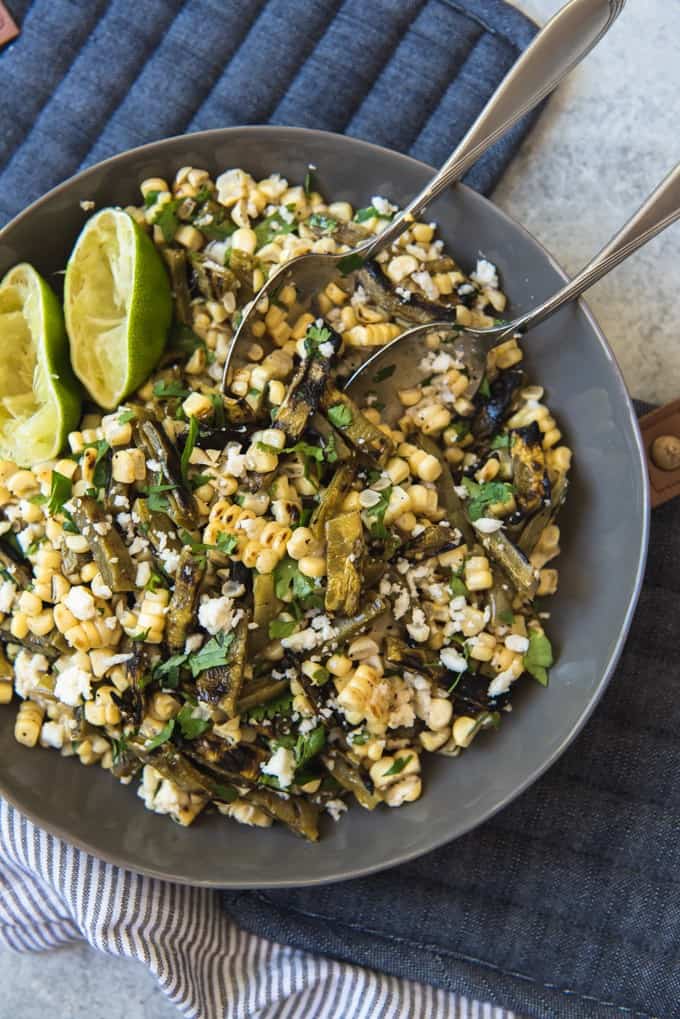 I have also seen fresh nopales in the produce section at my local grocery store occasionally, but you might have more luck going to a local Latin market.

You can buy jarred nopales in the Mexican food aisle of many grocery stores, but I’ve heard that fresh cactus paddles taste much better.

If you aren’t having luck finding cactus paddles anywhere, you could easily make this salad with asparagus or even green beans and it would still taste delicious.

When I got my cactus paddles at the farmers market, they were already trimmed for me, and I’m guessing it will be the same for you unless you happen to have a prickly pear in your yard and decide to harvest the young cactus pads on your own.

But if you need to clean and trim them, here is a helpful and interesting video on how to clean nopales. 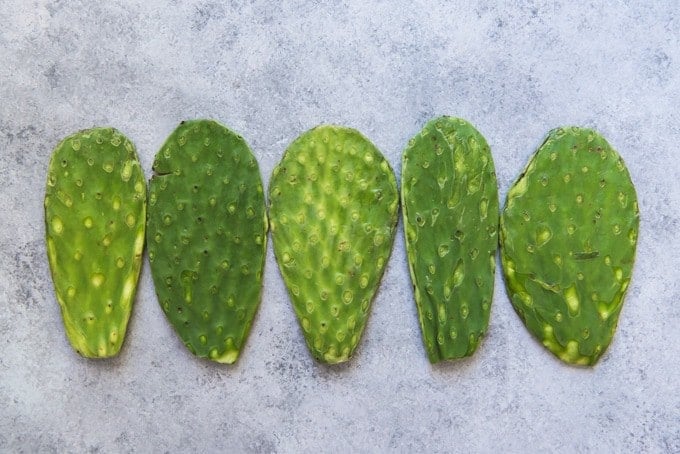 Cactus paddles have a crisp texture and tangy taste, that gets described as being really similar to green beans, although I feel like it is closer to asparagus, even though neither is a super accurate descriptor. And once the cactus paddles are cut into strips, they get a little slimy, like okra.

Remember, cacti store water inside their leaves so it makes sense that when you slice it a sticky substance might start to ooze out. But don’t let that turn you off – they really are good for you and taste delicious in this grilled cactus and corn salad! 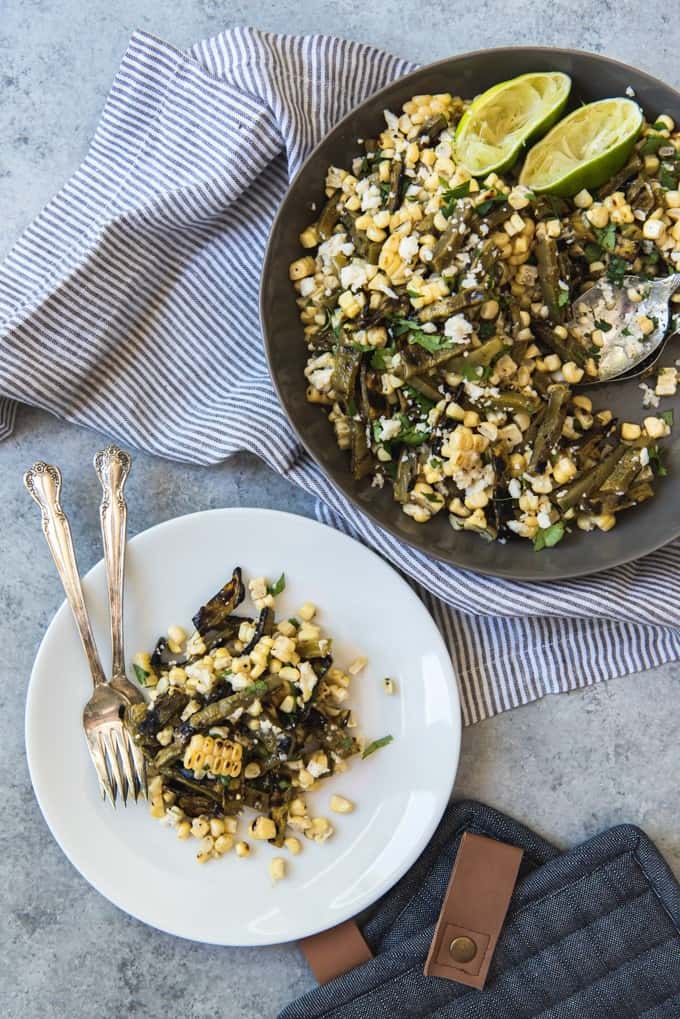 How to grill cactus paddles

You could grill the cactus paddles whole, or take the approach I used and slice them into narrow strips most of the way up to the central base of each paddle. Leaving the base intact makes it easy to flip the entire paddle on the grill while still letting more of the liquid inside the cactus cook out so they aren’t so slimy. When done cooking, it’s a simple matter to just slice off the base and toss the grilled strips of nopales into a salad. 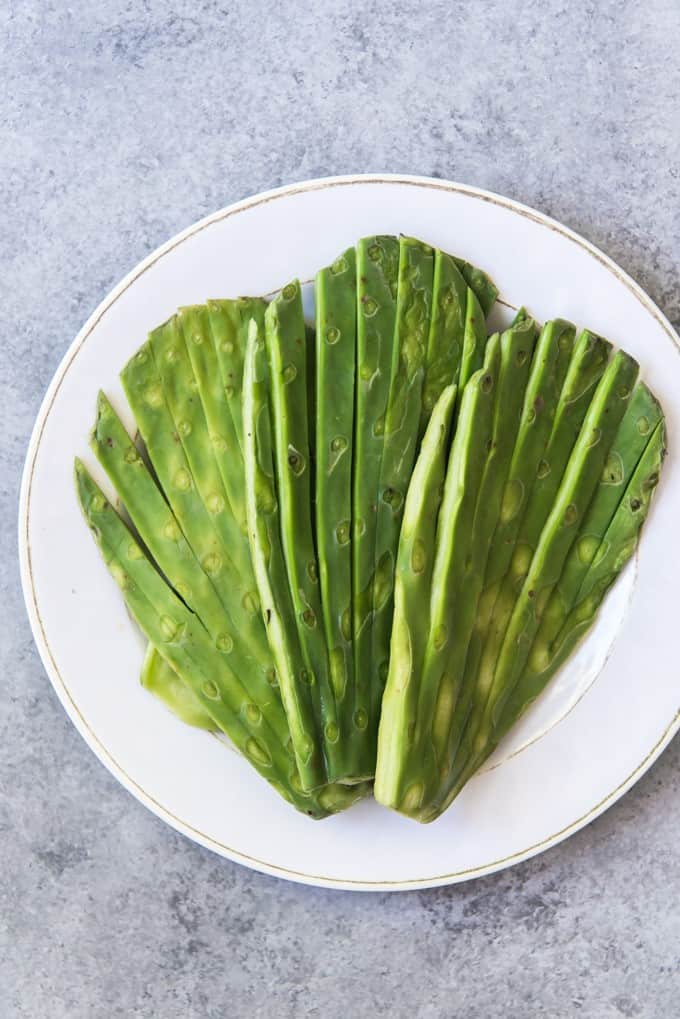 First the grill needs to be preheated to medium-high for a few minutes. Then when ready to grill, drizzle the cactus paddles with a little oil and season with salt and pepper.

Lay the paddles on the grill and cook for about 7 to 10 minutes, turning halfway through the cooking time so that the paddles can get a nice char on both sides, then remove from the grill and let them cool down a bit before using in the recipe. 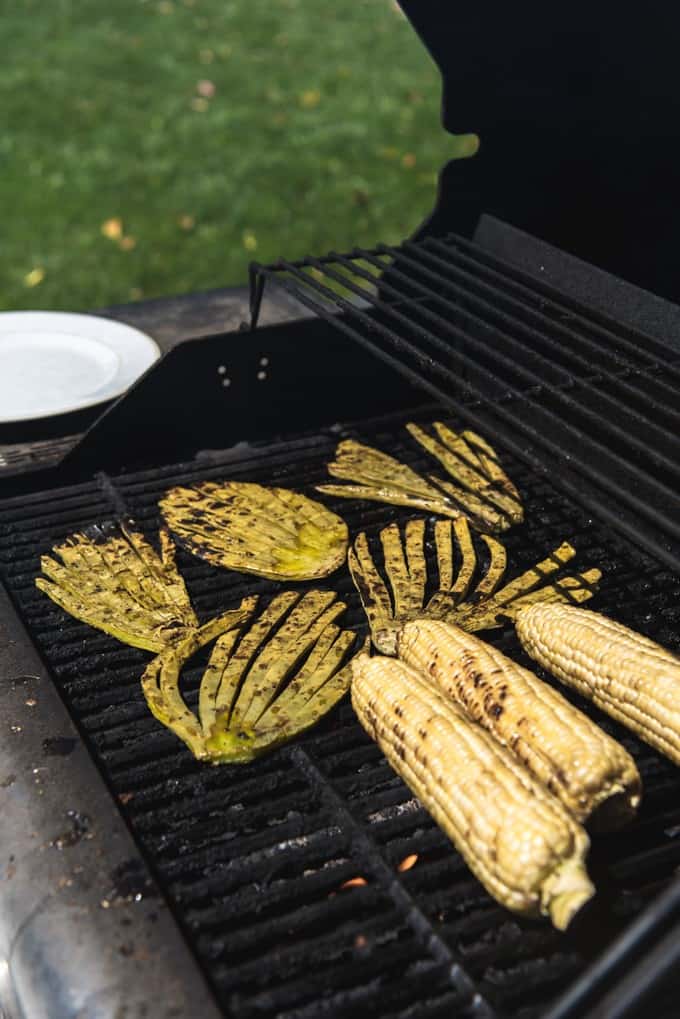 How to grill corn on the cob

There are a few different methods you can take to grill corn on the cob, and I’ve tried them all, but my favorite is just grilling the corn shucked and naked (the corn, not the cook, obviously).

We just shuck the corn first by removing the husk and the silk and lay the corn directly on the grill so that it gets all charred and toasty and has a great grill flavor that you don’t always get when you grill the corn in it’s husk.

This is the approach we use whenever we are doing corn on the cob because it requires less prep and gives that wonderful smoky flavor to the corn that I love.

Just turn the corn a few times while grilling so that it gets charred evenly all around the cob. It takes just about 10 minutes, which is perfect because that means the cactus paddles and corn will be done at the same time! 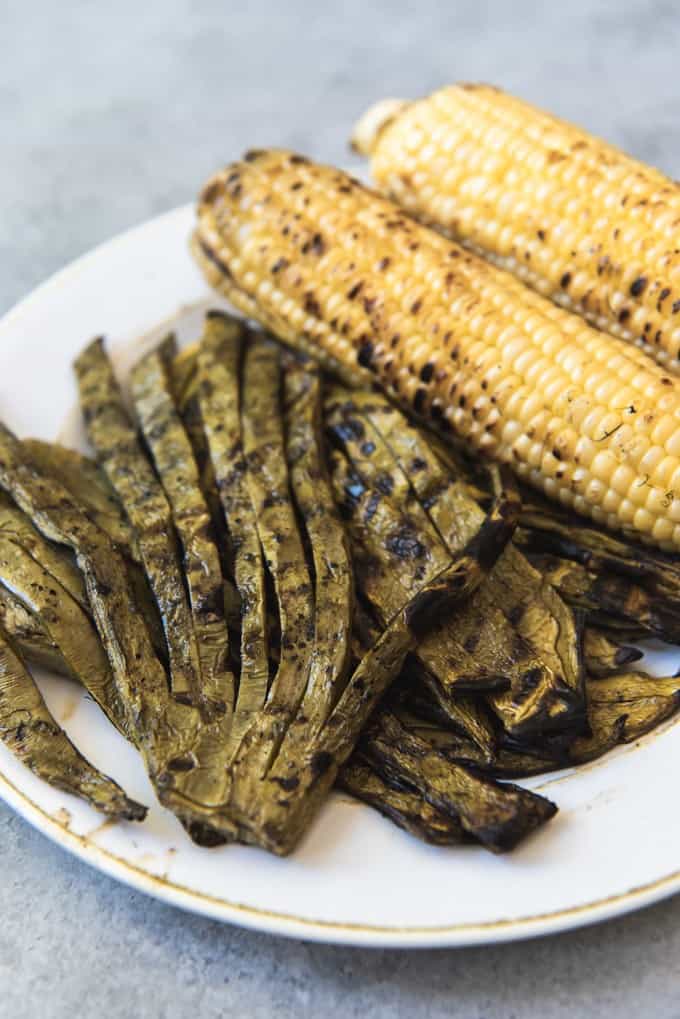 How to make grilled cactus and corn salad

Once the cactus and corn have been grilled, just use a sharp knife to carefully slice the corn kernels off the cob and chop the strips of grilled cactus into bite-size pieces. Then add them to a large bowl with the onion, garlic, and lime juice and toss to combine. 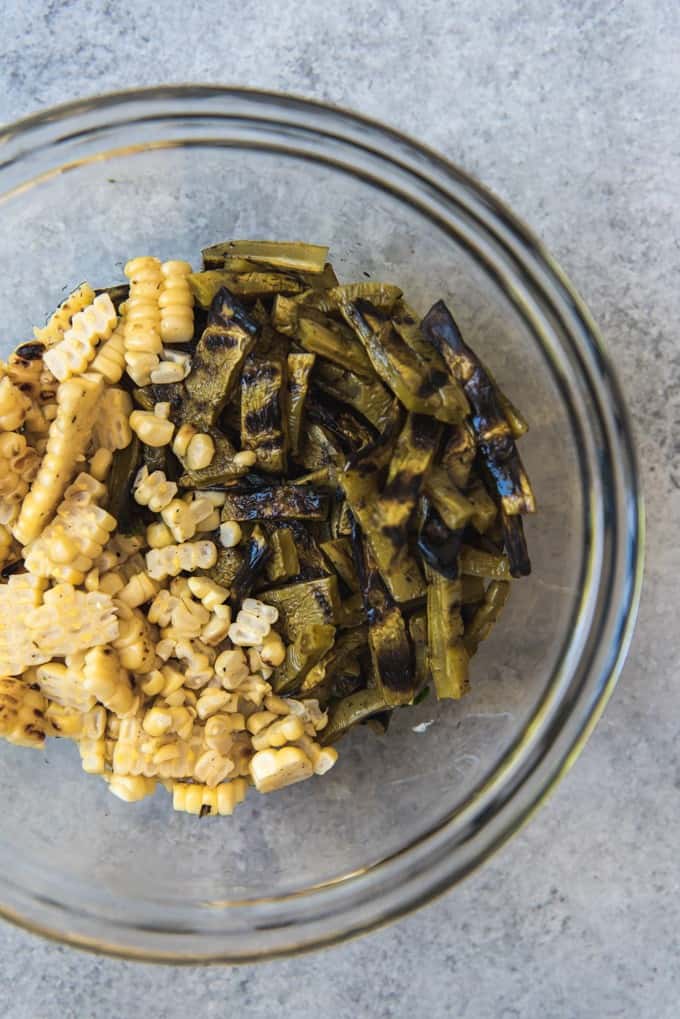 Season with salt and pepper, then sprinkle the queso fresco (you could substitute cotija cheese or even feta if that’s what you have on hand) and chopped cilantro over the salad and serve. 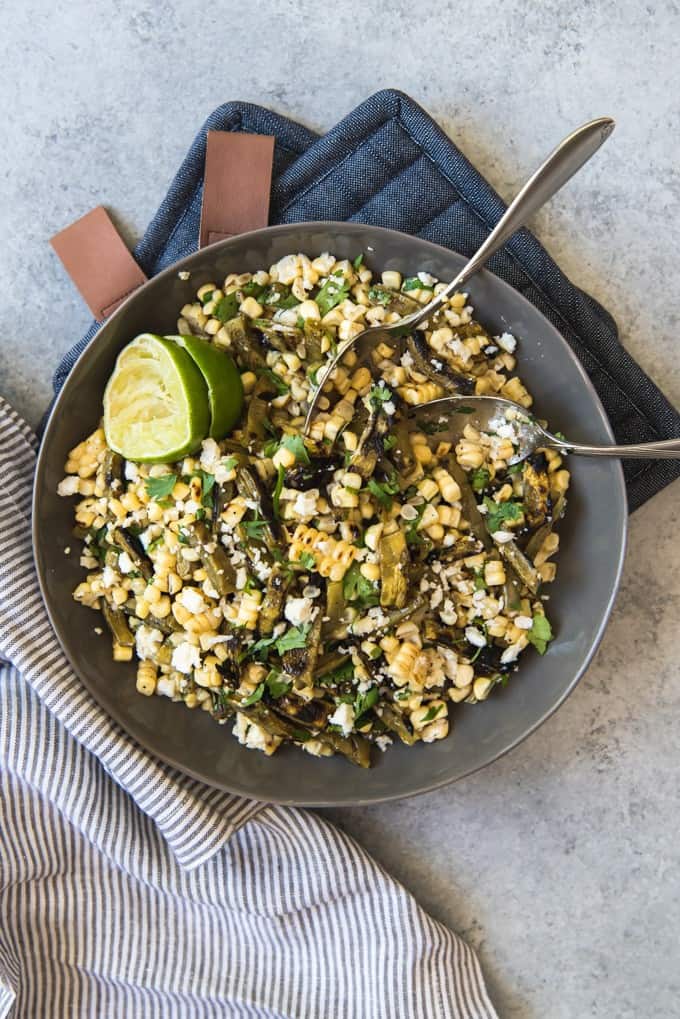 If you cannot find fresh cactus paddles, you could used the jarred kind instead and skip grilling the nopales.  But be sure to rinse the jarred nopales well, 2 to 3 times, so they aren't slimy.  Or substitute asparagus or green beans in place of the cactus paddles.

Have you tried this recipe?

RATE and COMMENT below! I would love to hear your experience. Getting feedback from you helps me and other readers too!   Also, if you share on INSTAGRAM, use the hashtag #houseofnasheats and tag me (@houseofnasheats) so I can stop by and give your post some love. Thank you!!!