These Southern Hush Puppies are deceptively delicious little bites of cornmeal batter flavored with a little grated onion and dropped into hot oil until the outside is crispy and browned and the inside is soft and fluffy. They sure are hard to resist!

If you love Southern food, be sure to try our Collard Greens, Best Homemade Biscuits and Gravy, Southern Fried Chicken, Pecan Pralines, and Southern Tomato Pie!

These tasty little morsels can be found through the South, so it's technically not fair to say they are from Arkansas, but I'm including them here anyway as part of my American Eats series because they are definitely an iconic food enjoyed in Arkansas as well as the other Southern states.

Although the recipes vary from place to place, they are all the same basic cornmeal batter with a few tweaks here and there like the addition of sugar for a slight sweetness (definitely my favorite approach even if it's not traditional) and a little cayenne pepper (just a tiny bit for flavor, not heat really) or finely diced jalapeno pepper.

I had only ever had these at restaurants prior to cooking up a batch of these Southern hush puppies at home for this post, but it was so easy to do that we are going to have to do these more often as a special treat!

Southern hush puppies are typical fish fry fare and are wonderful with fried catfish or shrimp, but they also pop up at bbq's in the South now too. And while I don't think there are any "traditional" dips for hush puppies (and I personally like to eat mine plain), ketchup, honey, or tartar sauce would all be appropriate.

I just love the lore surrounding the history of hush puppies, regardless of it's basis in truth. Southerners are known for being storytellers and for such a whimsically named food, it's fun to know the creative legends behind it, even if they might be total fiction!

Almost all of the stories have the same theme though - fried balls of dough were used to quiet barking dogs.

The most colorful story about the origination of hush puppies dates back to the Civil War, where it is said that Confederate soldiers would toss fried cornmeal cakes to their yapping dogs to keep them quiet if Yankee soldiers were approaching.

Another explanation of the name hush puppy is that a cook was frying up a batch of catfish and croquettes while being pestered by some kids and dogs who were in the kitchen. So to keep them quiet, she gave them the croquettes and told them to "hush, puppies!" and the name stuck.

An even older version is that hush puppies were invented in the early 1700's by nuns from France who came to Louisiana and started making French croquettes with cornmeal, which they called "croquettes de maise". This origin story doesn't account for the fanciful name, but it seems like a likely beginning to the food itself.

If you are interested in a more scholarly approach to the history of the hush puppies, check out this post by Serious Eats, which mentions a couple other stories.

Regardless of the genesis of hush puppies, they are part of a long legacy of Southern corn dishes like cornbread, corn pone, griddle cakes, and corn dodgers.

Their association with fish fries happened naturally since the fish were dusted with cornmeal and it made sense to use leftover cornmeal by making it into a batter to fry in the same oil as the fish.

How to Make Southern Hush Puppies

The batter for this Southern hush puppies recipe is so simple to throw together that it hardly bear explanation. But frying can be intimidating for many (myself included), so I thought I would share my best tips for getting delicious hush puppies your very first time. 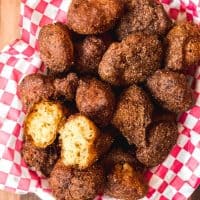 Southern Hush Puppies are deceptively delicious little bites of cornmeal batter flavored with a little grated onion and dropped into hot oil until the outside is crispy and browned and the inside is soft and fluffy.  They sure are hard to resist!
4.78 from 9 votes
Print Pin Rate
Course: Uncategorized
Cuisine: American
Prep Time: 10 minutes
Cook Time: 6 minutes
Total Time: 16 minutes
Servings: 12 hush puppies
Calories: 69kcal
Author: Amy Nash