Your search for the best Snickerdoodle Cookies recipe is over! This easy snickerdoodle recipe is my go-to for this cinnamon-sugar coated, soft and chewy sugar cookie recipe that is a perennial classic!

According to some sources, the snickerdoodle is the state cookie of Connecticut. Which is why I'm sharing my favorite snickerdoodle cookie recipe as part of Connecticut Week in my American Eats series, where I share some of the most well-known or iconic foods and flavors from each state in the USA, one state at a time.

But being the thorough researcher and former lawyer that I am, I actually found a report from the Connecticut General Assembly from 2005 online where it detailed that Connecticut does not have an official state cookie, while also noting that only New Mexico and Massachusetts have declared official state cookies (bizcochito and Toll House cookies, respectively).

Regardless of legitimized status as an official cookie, love abounds for the classic snickerdoodle cookie, not just in Connecticut but across the country.

Snickerdoodles are (or should be) a soft, buttery cookie loaded with cinnamon and sugar and having a distinctive and unique tang from a not-so-secret ingredient:  cream of tartar.

They are one of Paul's favorite cookies of all time, right up there next to chocolate chip (of course), my chewy brownie cookies, and peanut butter blossoms.

I love this chewy snickerdoodle recipe because unlike so many snickerdoodles I've had over the course of my life, these stay soft and chewy instead of getting thin and crispy and dry.

That soft, tangy snickerdoodle center is surrounded by cinnamon-sugar coating that is completely irresistible and achieved by rolling balls of snickerdoodle cookie dough in a mixture of ground cinnamon and granulated sugar before baking.

What is the difference between a sugar cookie and a snickerdoodle?

While snickerdoodles and sugar cookies share many basic ingredients like flour, sugar, and butter, the classic snickerdoodle also contains cinnamon and cream of tartar, a key ingredient that is absolutely necessary (in my opinion) for a true traditional snickerdoodle.

What is cream of tartar?

I had to do a little research to figure out what cream of tartar actually is. Turns out, it's a type of acid known as tartaric acid and is a byproduct of wine production, left over as a residue on the barrels used in winemaking. Fascinating, right? When combined with baking soda, cream of tartar and baking soda work like double-acting baking powder.

Can you make snickerdoodles without cream of tartar?

If you really want to make snickerdoodles without cream of tartar, either because you don't have any on hand or you just don't like the flavor it adds to cookies, you can replace BOTH the cream of tartar AND the baking soda called for in the recipe with 2 teaspoons of baking powder.

Why do they call it a snickerdoodle?

There are a few ideas behind where the name "snickerdoodle" came from. Some people think it is German or Dutch, coming from the German word Schneckennudeln or the Dutch word snekrad, both having meanings indicating a snail-like shape or design.

Other theories claim it's just a whimsically fun cookie name that comes from the New England tradition of coming up with creative, fanciful cookie names. 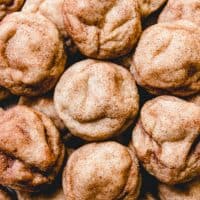 I typically do NOT chill my snickerdoodle cookie dough before rolling it into balls.  It certainly doesn't hurt to chill it, and I would recommend it if you have difficulty with your cookies spreading too much or going too flat.  But generally speaking, I feel like I have good results without chilling so I don't bother.