There is nothing like old-fashioned Southern Pecan Pralines! This melt-in-your-mouth treat is a cross between a cookie and a candy and it's loaded with crunchy pecans, butter, and fabulous brown sugar flavor.

I also have a Chocolate Pralines version! If you love making homemade candy to share with friends and family, be sure to also check out my Easy Homemade Peppermint Bark, Old-Fashioned Homemade Peanut Brittle, and English Toffee!

On our recent trip to Savannah, Georgia, one of the first things we did was stop at River Street Sweets and pick up a couple of classic southern pecan pralines. The sweet smell of caramel and fudge and chocolate beckons you in off the street and the moment you walk in the door you are offered samples of their famous pralines.

We even made multiple trips between the two stores over the weekend just to double-check. Because research. It's a tough job, but somebody's got to do it.

I wanted to share southern pecan pralines as part of my American Eats series representing Georgia since it produces more pecans than any other state in the nation. If you love pecans, you might also want to try my classic pecan pie or these decadent pecan pie cheesecake bars.

But pralines actually came to the USA from French chefs in Louisiana first and are often associated with New Orleans. From there they spread throughout the South and can be found all over in Georgia, South Carolina, and other southern states.

There is also a chewy version from Texas that my friend Kelly from Kelly's Kitchen Creation makes and sells. Kelly sent me a box of her chewy pralines last year and they are heavenly. You can order a box of them here and she will ship them to you. That's not an affiliate link and she didn't sponsor this post. I just think the world of Kelly and wanted to share since her chewy Texas pralines are totally different from these southern pecan pralines.

What is a Pecan Praline?

Southern pecan pralines are a sweet candy confection that is made with pecans, sugar, butter, and some form of dairy. I've seen pecan praline recipes using milk, cream, half-and-half, evaporated milk, and even buttermilk.

I haven't tried every option in my pecan pralines recipe, choosing instead to stick with evaporated milk while recipe testing, but I'm pretty confident that you could sub in equal amounts of a different dairy choice and still have you pralines turn out just fine.

Pralines have a wonderful texture that melts in your mouth. They are firm and have a snap when you break them, but they aren't crunchy (beyond the crunch of the pecans) or hard.

While pralines are most typically made with pecans, they started out being made with almonds historically. It wasn't until the recipe arrived in America from France that pecans became the nut of choice for this sweet treat.

How to make Pecan Pralines

How long do pecan pralines last?

Pecan pralines will last up to 2 weeks when sealed in an airtight container, although I definitely prefer them fresh. Heck, I prefer them still warm while they are setting up!

Can pecan pralines be frozen?

Yes, you can freeze your pralines, just like you can freeze fudge or caramels. Be sure to place them in an airtight freezer safe bag and they will last for up to 2 months in the freezer. (Yeah right, they won't last that long because they will all be eaten long before that point.)

Just allow them to thaw in the fridge overnight before eating.

How to use Pralines

We like to makes pecan pralines to deliver to friends in small cellophane bags or boxes during the holidays. They are a great choice for a cookie exchange even because they are similar in size and shape, even though they are a candy instead of a cookie.

You can also chop them up and add them to a dessert cheese ball, ice cream, a batch of caramel corn, or even mix them into cookies or brownies if you wanted to use them in a recipe.

What is the difference between a pecan and a praline?

A pecan is a type of nut while a praline is a type of candy that is made with sugar and nuts. While pecans are the most common type of nut used in pralines, almonds or hazelnuts will work too.

Are candied pecans the same as praline pecans?

Why are pecans called pralines?

Pecans and their candied version, pralines, are so intertwined as to have become synonymous to some folks, I suppose. You could probably get away with throwing in sugared pralines into a recipe that call for regular old pecans and it would still turn out.

What to do with failed pralines?

If your pralines don't turn out just the way you wanted them too, all is not lost. You might be able to save them just by stirring in some very, very hot water if the pralines are seizing because they were stirred too much. I've had great success with this approach because this is my number one mistake. If all else fails and the pecan pralines got too crumbly and dry, you can still sprinkle them over ice cream or mix them into homemade vanilla ice cream for a delicious treat. 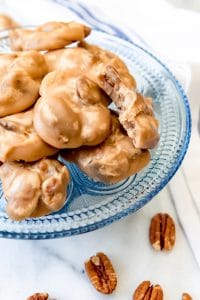 4.89 from 71 votes
Amy Nash
Prep Time 10 mins
Cook Time 10 mins
Total Time 20 mins
Course Dessert
Cuisine American
Servings 16 -20 servings
There is nothing like old-fashioned Southern Pecan Pralines!  This melt-in-your-mouth treat is a cross between a cookie and a candy and it's loaded with crunchy pecans, butter, and fabulous brown sugar flavor.

Some people prefer to chop their pecans.  I leave mine whole just like the pecan pralines at River Street Sweets.  Adapted from AllRecipes. 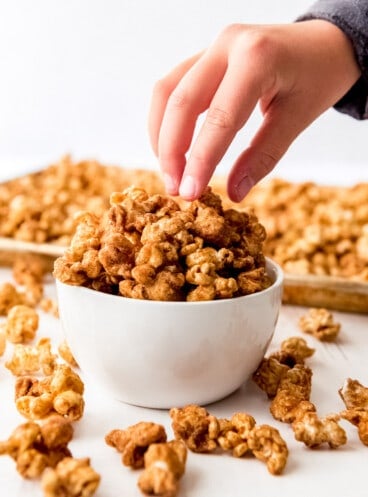 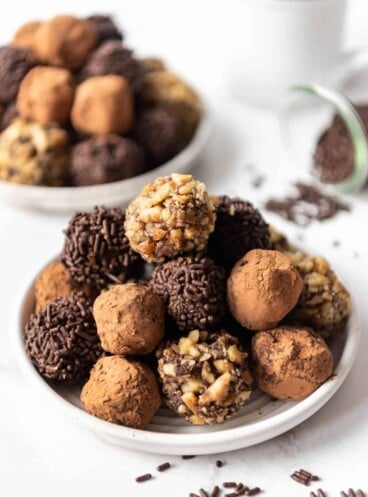