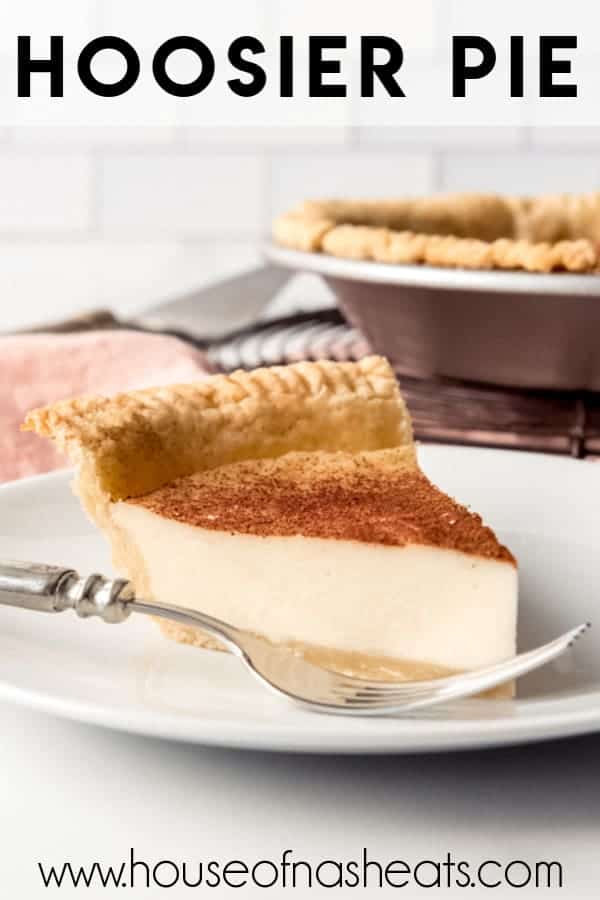 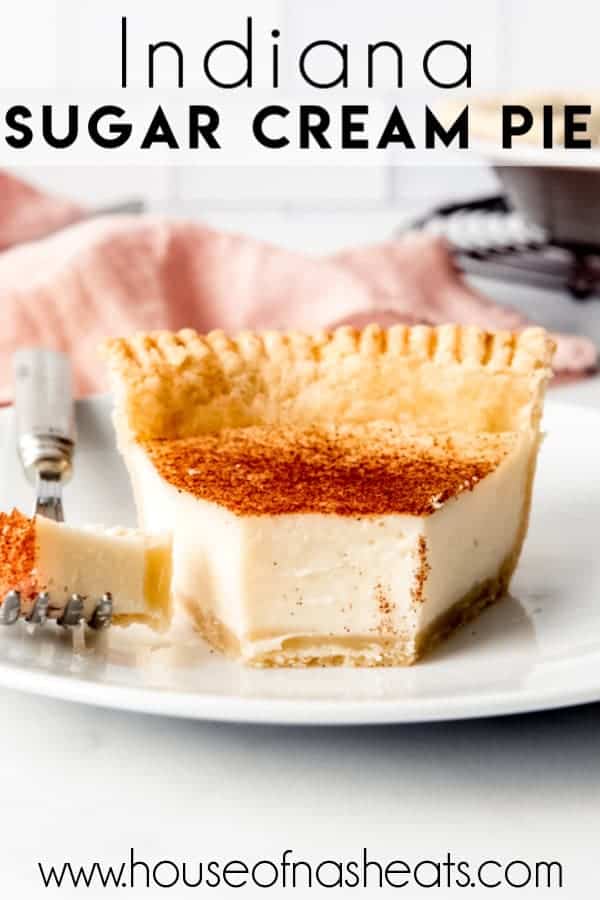 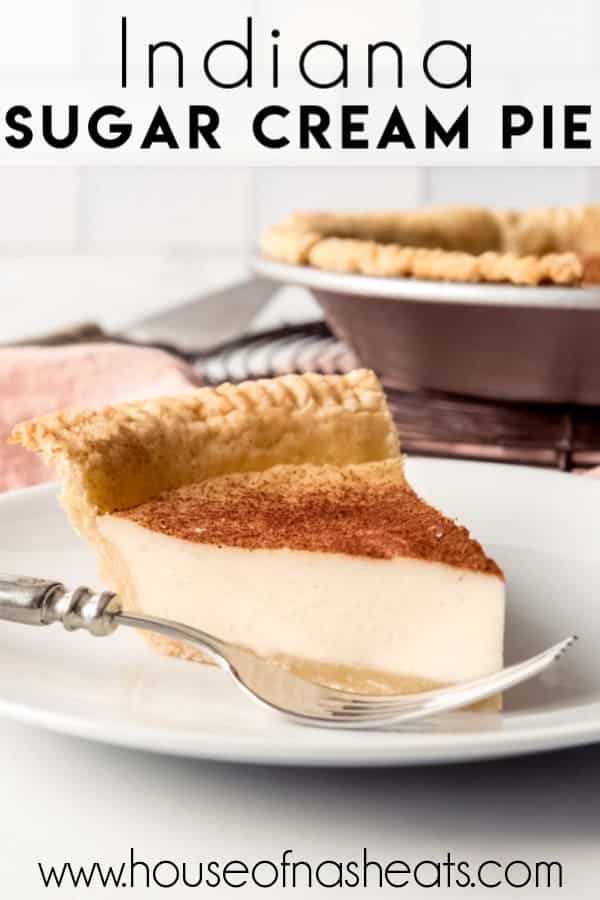 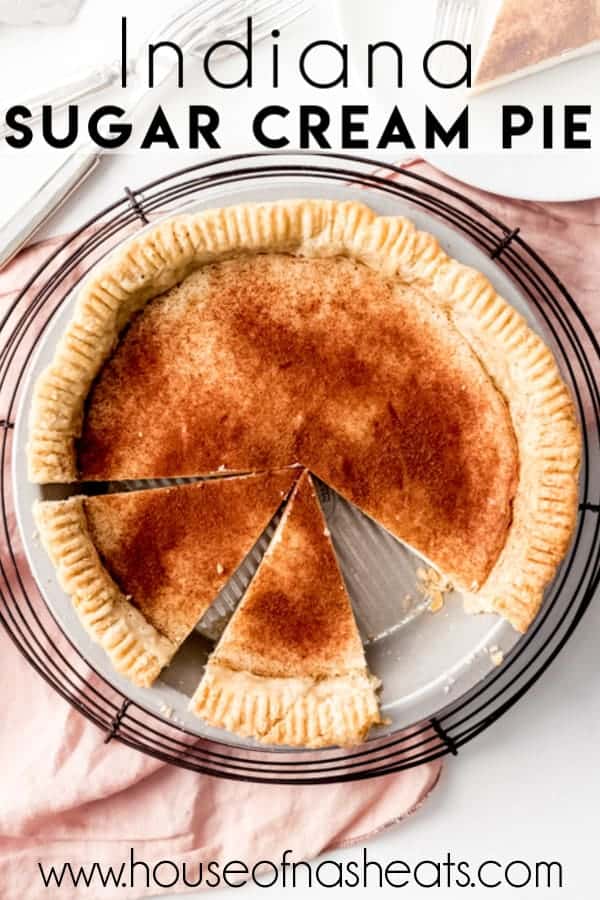 This Indiana Sugar Cream Pie (aka Hoosier Pie) has a wonderful custard texture and all the flavors of sweet cream, vanilla, cinnamon, and nutmeg in a buttery, flaky homemade crust!

If you love pie like we do, be sure to check out all our pie recipes! And don't miss some of our other favorites like this Easy Coconut Cream Pie, Chocolate Cream Pie, and the Best Homemade Cherry Pie!

I'm wrapping up Indiana Week on House of Nash Eats with a dessert, like I always do! If you are new to this series, I'm working my way through the foods that American is known for, one state at a time, in my American Eats series. It's so fun to explore the flavors of the U.S.A. with some of these classic recipes!

I love how many states have a strong association with a particular pie. My Alabama Possum Pie has been hugely popular and of course you can't go wrong with a Georgia Peach Pie.

Indiana is another state with a famous pie that is creamy, simple, and easy to make!

What is Sugar Cream Pie?

Sugar cream pie seems to have originated in Indiana in the 1800's from the Amish or Shaker communities using ingredients they had on hand. It's also known as Desperation Pie or Sweet Cream Pie, because it was made in times when there was no fresh fruit available for fruit pies but it could be made with pantry ingredients that were on hand on farms, like fresh cream, flour, and sugar.

It uses just a handful of ingredients to create something totally special and unique that reminds me of a cross between a snickerdoodle, flan, panna cotta, and creme brulee. It's got a dreamy vanilla custard-y base that is usually made with cream (or milk or half-and-half) and sugar, then thickened cornstarch.

The filling is first cooked on the stovetop, then poured into my favorite pie crust recipe that has been partially baked, and cinnamon and nutmeg are sprinkled over the top. It gets baked in the oven for a little bit longer to finish the crust and set the filling, then chilled in the fridge and served room temperature or cold.

One really unique thing about sugar cream pie is that unlike most other cream pies, it is made without any eggs! I saw a few recipes that called for eggs when I was researching how to make this pie, but they seem to be in the minority and the general consensus is that you can make sugar cream pie without eggs.

There is a place in Indiana called Mrs. Wicks that is famous for their sugar cream pies, if you happen to be visiting. I haven't had a chance to make it to Indiana yet, but I'm definitely planning to get a slice of Mrs. Wicks' sugar cream pie when I'm there!

How to make Sugar Cream Pie

Start out by making and blind-baking your pie crust. To do that, preheat the oven to 400 degrees F, then roll out your pie crust and use it to line a pie plate (affiliate link). I have a helpful video tutorial to show you how I do that on my YouTube channel that you might find useful.

Crimp the edges and poke holes all over with a fork so it can be evenly. Cover with parchment paper or foil and fill with pie weights, dried beans, rice, or even sugar, then bake for 15-16 minutes.

Remove the pie weights and parchment paper or foil and bake for another 7-8 minutes. The crust won't be fully cooked and browned, but it will be parbaked and finish cooking with the pie filling in the oven. Decrease the oven heat to 325 degrees F.

While the crust bakes, whisk the sugar and cornstarch together in a medium saucepan. Add the cream and whisk together, bringing to a boil over medium heat, stirring frequently until the mixture comes to a boil.

Let the filling boil for 1-2 minutes, stirring constantly, until thickened, then remove from the heat and stir in vanilla extract and cubed butter until the butter is melted.

Pour the filling into the parbaked crust, then sprinkle with cinnamon and nutmeg. Transfer to the oven and bake for 25 minutes at 325 degrees F. The center will still be jiggly, but the pie will continue to set as it cools. Let the pie cool to room temperature then chill in the fridge for 4 hours. Serve cold or at room temperature.

Keep any leftover pie in the fridge and eat within 4-5 days. This pie doesn't freeze well though, as the crust will go soggy when it thaws. 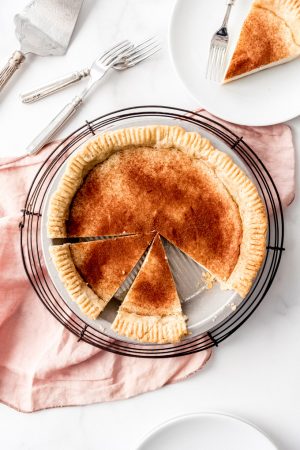 Adapted lightly from Taste of Home. 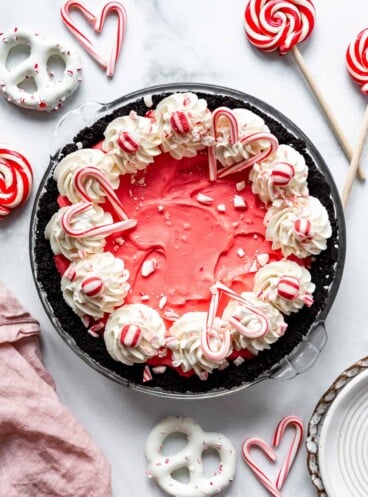 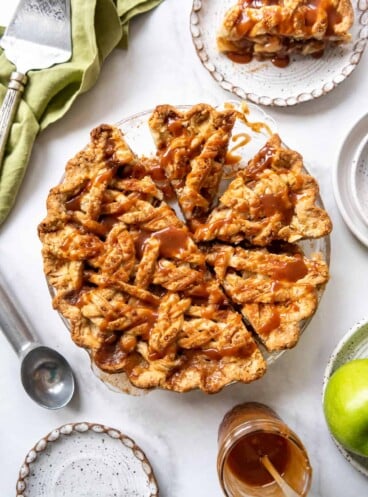